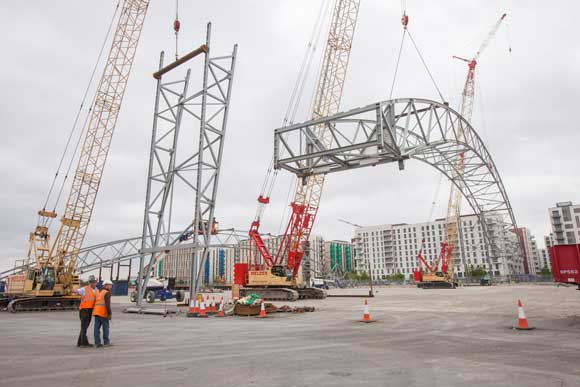 Demounting one of the spine trusses from the London Aquatics Centre

Nearly three years ago London hosted one of the most successful Olympic and Paralympic Games in modern times, but what has happened to those iconic venues? NSC finds out.

With just over 12 months to go before the 2016 Olympic and Paralympic Games start in Rio de Janeiro, NSC finds out what has happened to London’s Queen Elizabeth Olympic Park and its iconic venues in the three years since those golden days of August and September 2012.

All of the major venues at Queen Elizabeth Olympic Park in east London were constructed with steel and legacy was always a built-in requirement of their designs.

Whether this involved demounting seating areas to scale down the venue after Olympics, or taking the entire structure down and reusing it elsewhere – which happened with the Basketball and Water Polo venues – steelwork has played an important and innovative role. 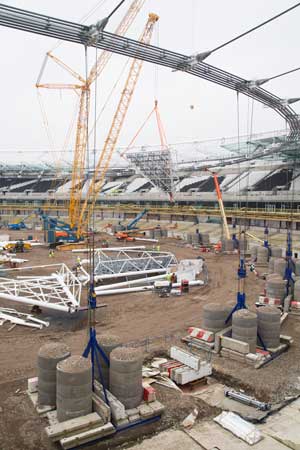 The centrepiece for any Olympic Games is the main stadium that hosts the opening and closing ceremonies as well as track and field events.

In the past many of these venues have become ‘white elephants’ after the Games, too big for local events and too expensive to upkeep in the hope of hosting intermittent international competitions.

The solution for the London stadium was to have an initial capacity of 80,000, but to incorporate a design with a demountable upper tier, so after the Games it could be removed to leave a smaller legacy mode venue with a 25,000-seat capacity.

These plans changed however before the Games took place when West Ham United FC and Newham Borough Council won the right to convert the stadium into a football venue, incorporating the athletics track.

Whether future plans involve demounting parts of the structure or reconfiguring it, steelwork’s flexibility makes it the ideal material for this kind of work.

Working on behalf of main contractor Sir Robert McAlpine in 2010, Severfield erected 10,000t of steel for the construction of the stadium, making it the lightest Olympic stadium in modern times.

The ongoing redevelopment work includes installing a new cantilevered roof as well as retractable seating so the stadium can easily be switched between an athletics and football venue. Steelwork contractor for the redevelopment of the stadium is William Hare, working with main contractor Balfour Beatty.

The new roof will be twice the size of the original at around 45,000m². Measuring 84m at its deepest point, the steel-framed roof will cover every seat in the reconfigured 54,000 capacity stadium.

Eight kilometres of cable net weighing around 930t and ranging in width from 60mm to 105mm were lifted and connected to create the new roof. There are 5,423 pieces of steel in the roof, with a total weight of 3,900t.

The stadium will reopen temporarily for five matches of the Rugby Union World Cup this Autumn, before opening permanently in mid-2016 as the new home of West Ham United FC and a national competition centre for UK Athletics. 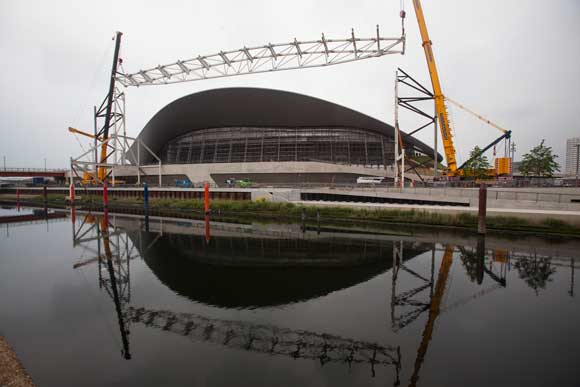 A large truss, which formerly supported temporary seating, is removed as part of the venue’s reconfiguration

Designed by Zaha Hadid, the London Aquatics Centre marked one of the main gateways into the London 2012 Olympic Park. With its sweeping steel roof, measuring 160m x 80m, the structure immediately became an iconic structure.

During the Games the centre had a spectator seating capacity of 17,500, mostly accommodated in two steel-framed temporary wings.

The permanent structure consists of 2,800t of steelwork, while the temporary structure required 3,200t.

After the Olympics the temporary wings were dismantled as part of a transformation programme, which culminated in the reopening of the facility in 2014 with a smaller 2,500 capacity.

The final part of the steel dismantling programme, involving the removal of two 172t spine trusses that supported the temporary seating wings, was carried out in early 2013 with two 800t-capacity mobile cranes.

The structure also incorporates a 250m long and 45m wide land bridge that forms a route into the Queen Elizabeth Olympic Park and the roof of the training pool. The bridge includes 14 steel beams, up to 60m long and weighing 75t each.

As well as the Olympic venues, the 560-acre Queen Elizabeth Olympic Park boasts a number of residential schemes centred around the former athletes villages, 6.6km of waterways, 15 acres of woods, hedgerow and wildlife habitat, 4,300 new trees and a host of artworks including the steel Orbit.

Further residential schemes are planned, while last year the Government committed to funding to help deliver the Mayor’s Olympicopolis vision. This will create a world class education and cultural district on the Park.

Continuing the legacy theme it will include facilities for University College London, University of the Arts London, a new Victoria & Albert Museum and a new campus for the London College of Fashion. 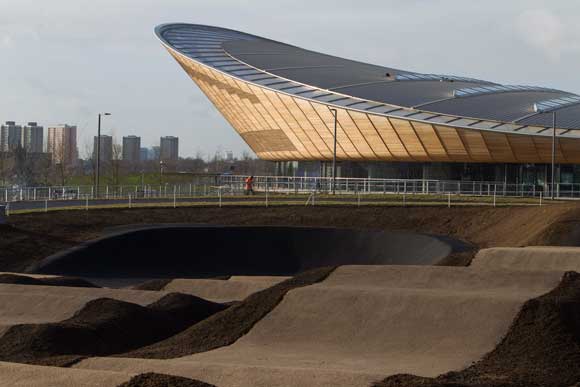 The Velodrome is now at the centre of a cycling park

During the Olympics Team GB won seven gold, one silver and one bronze medal at the Velodrome making it the most successful venue for home competitors.

The venue is now the centrepiece of the Lee Valley Velo Park that also includes facilities for road cycling and BMX bikes.

Steelwork played a crucial role in the construction of the Velodrome and it can be divided into two main elements; a concrete base and lower tier, and an upper steelwork portion forming the mid level concourse, the upper tier seating and the curved roof.

The upper tier of the Velodrome is formed by 48 inclined steel trusses, while the lower parts of the truss form the steel rakers supporting the upper tier’s precast terrace units.

Because of the shape of the roof structure, the Velodrome has two upper seating areas positioned on either side of the track and suspended within the two curves of the roof.

A tubular steel ring beam sits on top of the steel trusses and goes around the entire perimeter of the structure, in a rollercoaster fashion, supporting and helping to form the distinctive double-curved roof.

The Velodrome has been adapted for use by the public, while a further 1,000 seats have been added to guarantee the venue can still host international cycling events in the future. 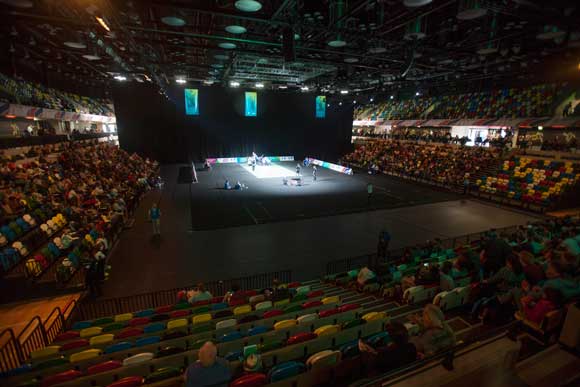 The Copper Box is now a multi-use arena

Known as the Copper Box because of its distinctive cladding, this venue was the first to reopen after the Olympic Games. With the addition of 500 seats bringing the capacity up to 7,500, the venue does not look too dissimilar to when it hosted Olympic handball and modern pentathlon, as well as Paralympic goalball.

Approximately 1,000t of steel was erected for this venue by Severfield. The Copper Box now hosts London’s only professional basketball team, as well as local handball and netball clubs.

The Basketball Arena was a temporary structure erected by Severfield and also contained 1,000t of steel. It was commissioned on a take-back basis and after the Games it was dismantled and returned to contractor GL Events.

More than 3,000 seats from the basketball Arena have been reused at the nearby Lee Valley Hockey and Tennis Centre.

Likewise, the Water Polo venue was also designed as a temporary steel-framed arena and it was also dismantled and returned to contractor after the Games.

Steel for the Water Polo venue was fabricated and supplied by Caunton Engineering.

Michael Sansom of the SCI

Steel structures are inherently demountable and reusable; more so than competing structural materials. It is no coincidence that virtually all demountable structures and systems use steel.

Think of traditional scaffolding; think of formwork for in-situ concrete construction – these all-metal temporary support systems are used for the traditional steel benefits of being lightweight and fast to erect but also because they are durable and reusable. Although the timescales may be longer, the same principles and benefits apply to steel buildings.

Greater attention is being focussed on end-of-life impacts of buildings, long-term resource efficiency and the adoption of circular economy models in the built environment. A few simple design principles, focusing on how buildings are taken apart, rather than how they are put together, is often all that is required to enable steel structures to be deconstructed and reused.

There are three levels at which steel structures can be deconstructed and reused: 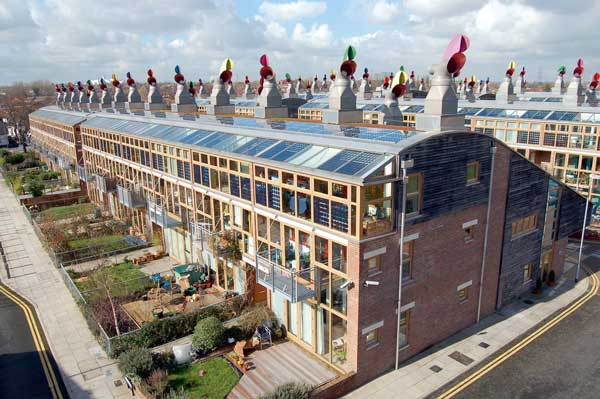 Although applicable to many building types, event venues are some of the structures most amenable for reuse, particularly where they are ‘temporary’ venues for one-off events such as the Olympics or the football World Cup. The scale and cost of such events means that the legacy of these high profile sporting venues is a high priority. In this context ‘legacy’ means leaving permanent venues in a state suitable for their permanent, post-event function, for example in terms of seating capacity and, where possible, reusing redundant and temporary structures in new applications when the event is over.

This is not a new idea. As far back as 2000, this approach was adopted in the Sydney Olympics. For example, the temporary seating at the aquatics venue was deconstructed when the Games were over and was re-erected as a permanent grandstand at the rugby stadium in Wollongong.

More ambitiously, the 2016 Rio Olympic Committee has adopted the concept of ‘nomadic architecture’ for some of its temporary venues. For example, the handball arena has been designed so that it can be deconstructed and will be reused to construct four new schools on the outskirts of Rio.

Design for deconstruction and reuse is another unmatched sustainability attribute of steel construction. Already common in specialist niche markets, particularly temporary event venues, the challenge is to broaden the approach to make it commonplace in mainstream construction.