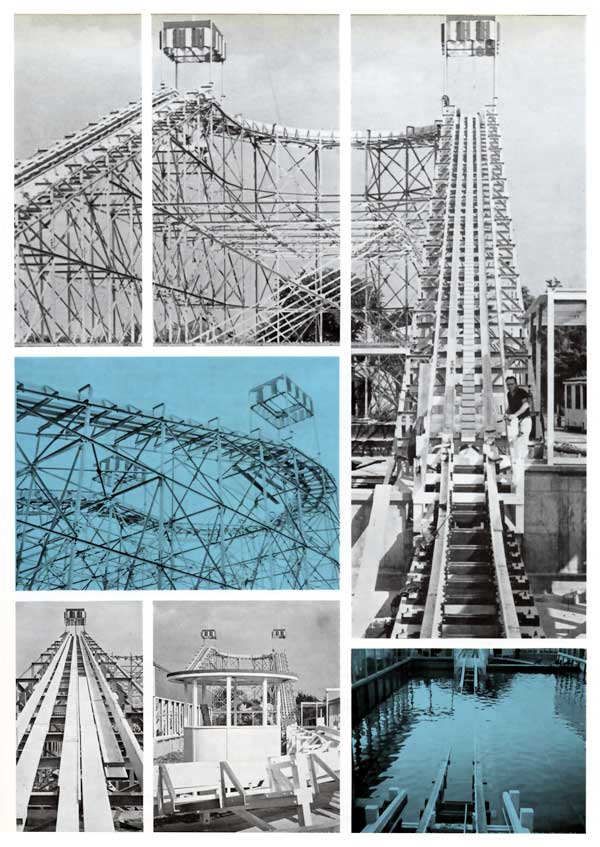 A landmark familiar to several generations of visitors seeking pleasure at the famous Kursaal Amusement Park, Southend-on-Sea, was the huge water chute which dominated the surrounding buildings and stalls. The structure has now been replaced by a new water chute of equally prepossessing dimensions and which comes into service when the Kursaal re-opens for its 1965 seasons.

The previous water chute, of steel construction, was originally erected at the White City Exhibition, Shepherd’s Bush – together with other large steel structures such as the great ‘flip flap’ – and as far as can be ascertained, about 1905, and in 1922 was re-erected at the Kursaal, since when it has been in continuous operation. The lasting qualities of steelwork, even in a corrosive marine atmosphere, are well demonstrated by the fact that after 60 years service the structure was still in first class condition. However, although still functioning up to the time of its demolition in 1963, the design has become obsolete and uneconomical as the time taken by the cars to reach the top was unduly long, the turnaround procedure at the top and bottom was cumbersome and twenty attendants were necessary to ensure smooth operation.

Water chutes of this type built elsewhere during the past few years have been of timber construction and thus the Kursaal authorities had to decide whether to build in this or some other material. Very serious consideration was given to this matter and after careful research it was found that steelwork would not only be more economical but also easier and quicker to erect and, being galvanized, easier and cheaper to maintain.

Had timber been used it would have been expensive impregnated Canadian Pitch Pine specially imported because of the considerable lengths required, and the fabrication of the structure on site would have been a lengthy process: with the present shortage of carpenters the latter factor was also of considerable importance. Also, because of the need for periodic painting, maintenance would have been quite expensive. For these reasons it was decided to erect a steel structure of similar size and contour to those already erected in timber at Manchester and Battersea Park to the designs of Sir Leslie Josephs.

The new water chute structure is designed to B.S. 449, using steel (mainly angles) to B.S. 15. It was wholly fabricated at works, welded as far as transport considerations would permit and galvanized. All site connections were bolted. Steel was employed wherever practical, i.e. the framework for the station building walkways, the splash screen and the elevated track supporting structures – which include the forward and return ramps and top loop.

The new water chute has six boats, each carrying six passengers and, in contrast to the previous water chute, it can be operated by only five instead of twenty attendants. Each boat enters the station to load with passengers and is then pulled to the top of the incline by a motor-driven endless chain. Here it is released from the chain whilst on a slight fall in the track which gives it initial momentum to continue the journey around the banked half circle to reach the beginning of the downward run. An emergency braking system is provided at this point. Then, accelerating very quickly, it plunges downwards into the water 50 ft. below with a tremendous splash and finally continues its journey around the lower half circle to return to the station under the control of a braking system comprising squeeze-type angles.

As the boats travel around the circuit the structure is subjected to very severe shock loads and thus maximum strength and rigidity are essential requirements. The elevated portion comprises a series of braced towers of varying heights designed as cantilevers from the ground level bases to resist wind pressure: a system of inter-connecting cross bracing ensure necessary rigidity. Horizontal semi-circular braced girders at the top level take the thrust induced by the surge action of the boats during the semi-circular run before entering the slide. The entire elevated horizontal length of the structure is anchored with angles at track level from the top to the lower end, where they are secured in concrete blocks. 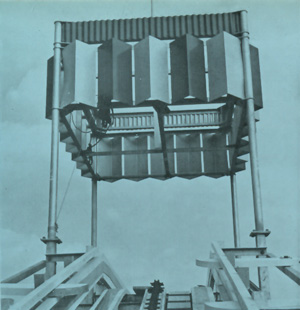 At the top are two decorative features in the form of flag towers comprising a frame of tubes and angles faced with 1/8 in. thick galvanised fluted plate, slotted to minimise the effect of wind pressure.

Normally structures of this type require considerable checking and adjustment after the preliminary test runs but in the case of this water chute the proprietors found everything perfectly satisfactory from the initial switch on. In their opinion this success originated in the drawing office, followed by accurate workmanship in the fabricating yard of the contractor.

From Building with Steel May 1965