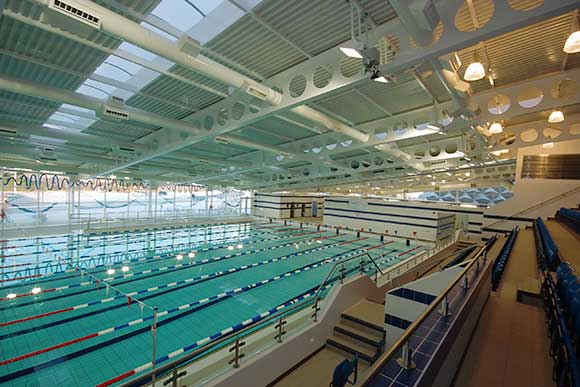 Sustainability and green credentials were the main drivers for a new leisure centre in Bletchley. NSC reports on a project which has achieved all of its aims with the aid of a steel frame.

Forming an integral part of Milton Keynes Council’s ambitious ‘Building a Better Bletchley’ project, a new £21M Leisure Centre was officially opened last January. The building is an energy efficient and sustainable structure and one which will provide a much needed boost to the local community.

The building can be divided into four main areas, a main sports hall which is a portal frame 9.1m high to the underside of its haunch; central main building area with openings for squash courts, an atrium and smaller sports halls/gyms; a third floor seven lane bowling alley; and a 25m eight lane swimming pool with a curved feature wall and a monopitch roof formed with Westok cellular beams which slope down at eight degrees and taper to oval columns at the perimeter. Each of these areas are interconnected to form one large building.

Built on a site adjacent to the existing centre, the project had undergone four years of consultation since receiving planning permission in September 2006. Milton Keynes Council set up a rigorous design review process upon architects Holder Mathias being appointed, liaising with key stakeholders such as English Heritage and Sport England.

Commenting on the project, Mark Lewis, Senior Architect at Holder Mathias Architects, says: “Our brief was to design a new state-of-the-art leisure centre that could replace the existing one, while aspiring to achieve the same status as a significant iconic structure to come.

“The vision for the scheme was to create a carefully integrated development with an inspiring public realm. The curved structures of the pool hall provide a new visual dynamic, while the design has been set out to maximise natural daylight and sustainability.”

In order to achieve this desired architectural and sustainable vision, a steel frame was chosen for the project. Mr Lewis states that steel is more adaptable and flexible, so if the council ever wished to add-on extensions or even change the building’s internal layout, it could be done, easier than if the structure was built with concrete. Throughout the structure there are partitions – such as in changing rooms – which could be removed to change the area’s configuration.

Green credentials are important to the client so the Centre was designed to achieve an ‘Excellent’ BREEAM rating (see box story). The fact that steel is endlessly recyclable was another important factor in the material being specified.

Because of the functionality of the structure, with its many sports activity areas, column free spaces were obviously an over-riding requirement in the design. To achieve this there are some fairly big spans in the structure, most notably in the swimming pool hall and sports halls.

BWB Consulting says it worked closely with the project architect and SDC to develop the structural form to meet the requirements of the clients brief in the most cost effective manner without compromising the aesthetic qualities of the building form.

“We have 30m clear spans over the pool and by using cellular beams to accept the many services and leaving them fully exposed, we’ve made an architectural feature from the steelwork,” adds Mr Lewis.

Another area with an even longer span is the hall which incorporates the bowling alley. Here 40m clear spans have been formed with a series of 2.5m deep trusses.

“We wanted to keep the structure as light as possible and forming these spans with concrete, for instance, would have meant a massively heavy structure,” explains Mr Lewis.

Erecting the longest of spans meant steelwork contractor Mifflin Construction had to bring the sections to site in two pieces. Mifflin was on site four months erecting the project’s steelwork as well as installing the metal decking and precast planks.

As the swimming pool is regarded as the centrepiece and the public face of the centre, it was erected first with the other halls and areas – which are separated from the pool by a curving feature wall – then built sequentially.

This curving wall not only divides the leisure centre, but also helps define the pool area as the main public focal point. This section of the structure’s exterior is mostly fully glazed, allowing natural daylight to penetrate. Covering the pool and supported by the cellular beams is an unusual elliptically shaped roof, which again sets this part of the structure apart. Also included in this portion of the building is the centre’s cafe and a covered seating area.

Next to the new structure, the existing leisure centre remained open throughout the construction programme, and it is now being demolished to make way for a new multi-storey car park which will not only serve the new leisure centre but also the nearby High Street.

‘This could have been a challenge, but the existing centre never impinged on our construction programme,” comments Keith Anderson, Project Manager for SDC Construction. “We initially did some road improvements which gave us a defined access and consequently our work and deliveries never interfered with the general public.”

Summing up this highly successful project, Paul Sanders, Assistant Director for Leisure, Learning and Culture at Milton Keynes Council, says: “This has been a very fruitful project, many years in the planning, and we were pleased to be able to open the doors of the new look leisure centre at the start of the year with a facility that clearly has its eyes on limiting its environmental footprint and providing a significant revenue saving to the tax payers of Milton Keynes.” 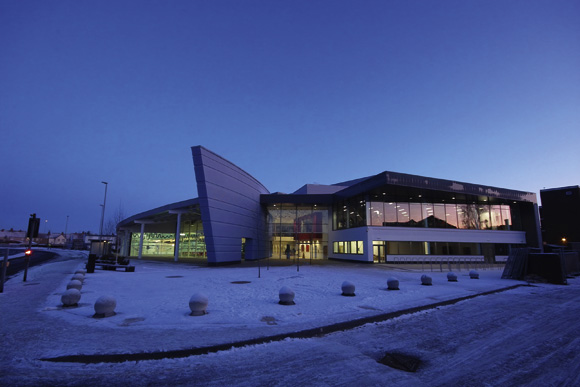 Bletchley Leisure Centre has been recognised with a BREEAM Award in the Bespoke category at the 2010 BREEAM Awards, held at the Ecobuild Arena in Earls Court, London during March.

The centre scored 79.6% which is an ‘Excellent’ rating, to beat off competition from several other top rated sustainable buildings, and was one of only 16 developments to receive an award at the ceremony. The awards recognise and reward those involved in the design and construction of the highest scoring buildings certified under BREEAM.

The centre was recognised for incorporating sustainable features such as biomass fuelled boilers, rainwater harvesting and natural ventilation.

Carol Atkinson, BRE Global Chief Executive, says: “This facility will bring a great deal of pleasure to the residents of Bletchley for years to come and it is a tribute to those involved in the project that they have achieved such an excellent standard.”