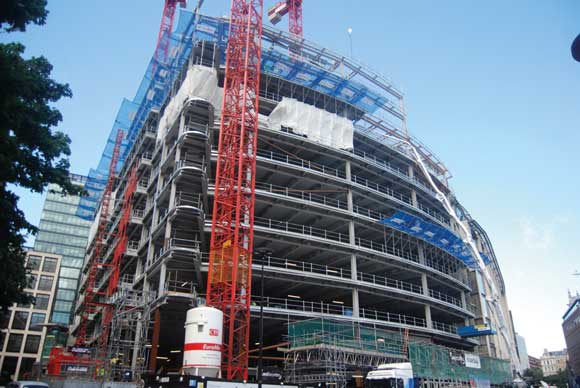 The corner cantilever is hung from the rooftop

A 17-storey cantilevering section of the building is hung from a large rooftop girder to create a column-free entrance area for a City of London office scheme. Martin Cooper reports.

One of a number of City schemes currently under construction is One New Street Square, located just north of London’s former newspaper hub of Fleet Street, and a stone’s throw from the new Crossrail station at Farringdon.

Occupying a tight plot bounded on three sides by roads, the scheme consists of what appears to be on plan two interlinked wedge-shaped structures rising to 12 and 16 floors respectively.

Inclined roofs, sloping in opposite directions and accommodating plant areas, top both wedges.

However, in reality there is no structural split and the floorplates are continuous across the entire footprint up to floor 11, after which the floorplates reduce with terraces up to level 12. Thereafter one half of the building rises to structure’s maximum height.

“The flat iron plan forms were generated by the alignment of the lateral assessment area of the Primrose Hill viewing corridor towards St. Paul’s Cathedral, and the site’s dramatic position within the local townscape, in particular its appearance from Ludgate Circus, Temple Gardens and adjacent streets,” explains Robin Partington & Partners Architect Niall Monaghan. 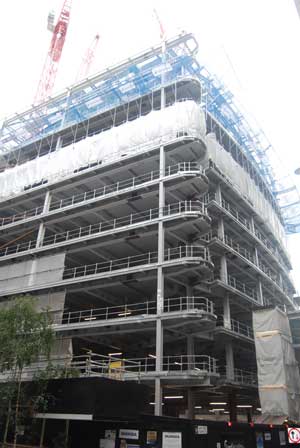 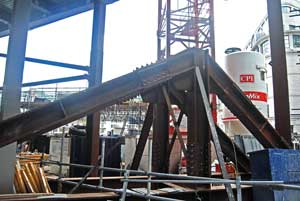 Aside from one ground floor retail unit, the scheme will offer more than 20,000m² of prime City office space.

The building’s main entrance will be on its southeastern corner along Shoe Lane. This part of the scheme features the standout element of the development as a 14-storey high cantilever ensures there are no perimeter columns obstructing the entrance.

To accommodate this feature the entire corner of the building’s steel frame is supported by a hanging column suspended from the underside of floor 15 down to first floor level.

“This proved a challenge as the first to 14th floors had to be erected prior to the installation of the transfer girder at 15th floor level which supports the cantilever,” explains Severfield Contracts Manager Martin Clyne.

“We worked closely with Waterman and Skanska to develop the hanger detail as this was a critical area on the project.”

A number of design workshops were convened to focus on this important detail, before a compound plate girder was decided on as the best option.

This plate girder was fabricated, and will be delivered to site this month (October), as five individual sections. Once on site, these members will be craned into position and bolted together in the final rooftop position to form one 20m-long 37.5t girder.

As there is no permanent column from ground floor to first floor at this corner of the structure, an additional transfer system had to be developed to temporarily prop 14 floors of cantilevering structure.

“We had to design and install a temporary column with a jacking system to support the 14 floors until the hanging column was finally connected at floor 15 to the plate girder,” adds Mr Clyne

The grillage weighs 21.5t and measures 11.7m long by 1.9m wide and 3m high. It was fabricated and delivered to site as one assembly and lifted into position by one of the site’s three tower cranes. This operation was carried out on a Saturday to minimise disruption to traffic and operations on site.

The remainder of the steel frame is a fairly typical commercial structure featuring Fabsec cellular beams throughout to accept all of the building’s services. Perimeter columns are spaced at 12m centres, aligned with a 1.5m space planning grid, while internally the spans to the centrally positioned core are up to 13.5m long.

The vast majority of the steel frame begins at ground floor level, with the perimeter columns supported by the site’s retaining wall.

However there are eight internal steel columns that punch through the ground floor and are founded on the two-level deep basement’s lowest slab. These steel members are located within the lower 12-storey high part of the building and     are necessary as this area has one zone that extends northwards either side of a party wall.

The perimeter columns here are too far from the core to accommodate one column-free span, so intermediate members had to be designed into the overall structural design. There is no ground level retaining wall to support these columns, which are located within the floorplates, so they had to extend down to the basement.

Summing up, Mr Monaghan says: “Both concrete and steel primary frame options were considered, however, to minimise foundation loads and given the long spans required, a steel frame solution with composite metal deck slab and composite steel beams with integrated services was considered most suitable.”

One New Street Square is due to be completed in June 2016. 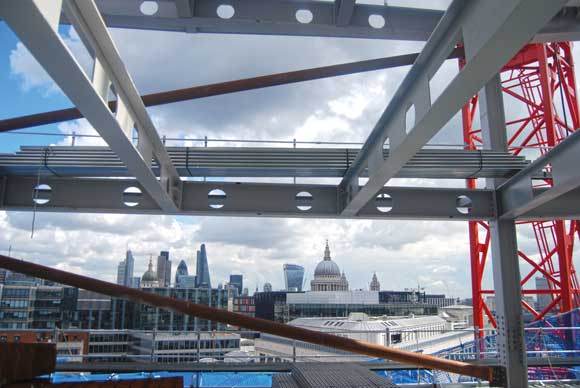 The upper office floors provide views across the City

The plot of One New Street Square was previously occupied by two buildings, one an office block, the other the International Press Centre. Both were demolished under a separate contract prior to Skanska starting on site late in 2014.

“Our initial task was to dig out the two-level basement, which required underpinning, propping the entire site and installing a new retaining wall,” says Skanska Project Director Tim Halford. “Approximately 400t of steelwork was used for the extensive propping system.”

The concrete works that form the two subterranean levels and the core were then completed prior to the steel erection programme kicking off.

Because the site is so confined, Skanska decided that scheduling the major trades one after the other was the best option so as not to have too many workers on site at any one time. This tactic also ensured the tower cranes could be used pretty much all the time by the concrete contractor and then by steelwork contractor Severfield.

As the site has three tower cranes, Severfield used two for the erection process, while the third and largest tower with a 32t lifting capacity was used primarily to unload deliveries from trucks parked in the project’s pit lane located along Shoe Lane.

“Working in this way Severfield has been able to erect the steel as planned on a just-in-time basis and with no road closures,” says Mr Halford.