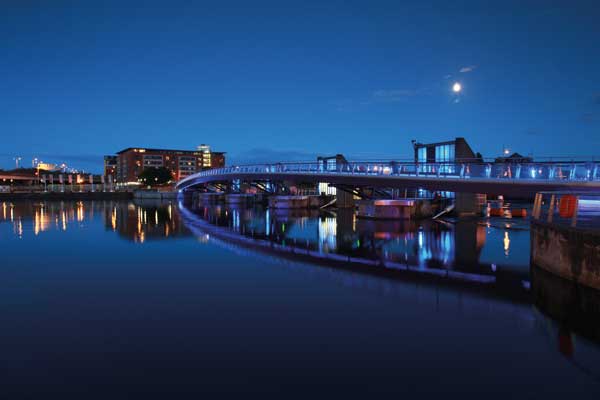 Around 16,000 people every week now use Belfast’s new footbridge that connects Donegall Quay with Queens Quay.

“We needed a structure that was lightweight, durable, robust, slender and curved in both elevation and plan. Steel was the obvious choice,” explains AECOM Senior Structural Engineer James McCann.

One of the main construction challenges on this project was the erection process and the need for a crane, which was suitable to lift 25t sections of the bridge deck at a reach of around 70m. As a result a 1000t-capacity crane had to be used for the main bridge deck lifts.

The overall length of the footbridge is 120m and it is 8m wide at the widest point. The total tonnage of structural steel for the project was 270t. 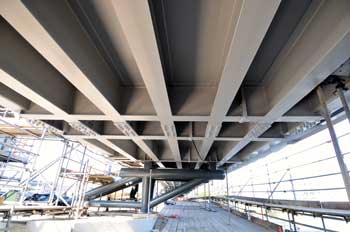 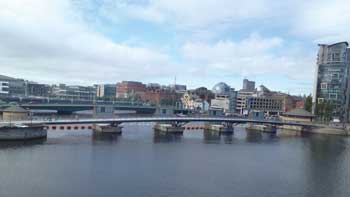 The bridge is connected to the existing ‘Pier Houses’ via four steel truss-type frames or ‘trees’, each of which is unique as a result of the bridge bring curved in two directions. The ‘trees’ were all made from CHS sections, which were laser cut using files produced from the Tekla 3D model.

Each of the ‘trees’ has four feet, two at the front and two at the rear. The ‘trees’ are anchored at the rear into the inside of the existing reinforced concrete ‘Pier House’ using two M76 tension rods, which were adjustable to aid levelling and alignment of the bridge deck after erection.

The four ‘trees’ were the first parts to be erected, two set in from each side of the river.

According to steelwork contractor M Hasson & Sons, the next process was the erection of the bridge deck sections. There are a total of nine deck sections, which are all unique, with the largest being approximately 17m long.

The main framing of the deck sections were made from a combination of 610mm × 229mm × 101mm UBs for the internal beams and 500mm × 300mm × 16mm RHS (rectangular hollow sections) for the perimeter beams.

These are at approximately 1m centres to correspond with the handrail posts. The deck plates are all 15mm thick and fully welded to the framing beams and act as part of the main structure. Due to the size of the large crane it was necessary to erect all of the bridge sections as far as the halfway point from one side of the water before moving to the other side and repeating the process.

The deck sections over the ‘trees’ were set in first to create the main supports and then the infill sections erected into the gaps.

“The most crucial infill section was the final one in the middle of the bridge, which joined the two halves together and fitted easily. To facilitate access to the bolted splice locations the deck plates were site-measured and then welded in situ,” adds Mr McCann.

Challenging survey, design and co-ordination were required in order for the bridge to be supported from the existing ‘Pier Houses’ that were part of Lagan Weir.  The complex fabrication and erection of the support ‘trees’ and bridge deck were superbly executed by the steelwork contractor, say the judges.