The Ardley Energy from Waste Facility near Bicester has been designed to sit low on the landscape and is built from materials reflecting the plant’s modern technology.

The completed building is up to 229m-long, varying from 38m to 70m wide and between 15m and 35m high. Steel was the natural choice for the main frame due to the curved shape of the building, together with the clear height and internal space requirements.

Although the structure appears to look like one building, internally and under the cladding it is split into several zones which allowed different designs to be incorporated, resulting in over 2,000t of structural steelwork being used.

Some areas were constructed from ground level and had clear spans across the structure, while other areas were built from concrete supporting structures. With the internal processing plant taking up most of the internal areas, the use of computer modelling was crucial to make sure there were no clashes between key plant, equipment and their secondary supports and the main frame. 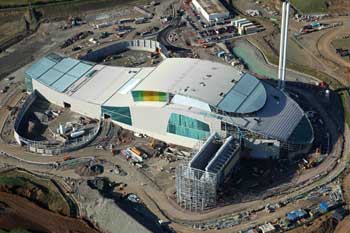 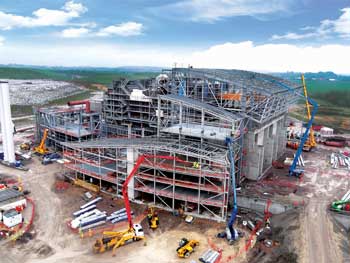 Within the facility’s waste bunker, the crane beams and all connected steel members had to be designed and fabricated in accordance with Execution Class 3 requirements due to the high fatigue requirements caused by crane movements.

As the internal process plant and associated secondary steelwork for access and support were constructed in advance of the main frame enclosure, the use of modular roof assemblies, some weighing 40t, had to be used. They allowed the 35m-high roof to be infilled with steelwork, which in turn supported the cladding systems.

The majority of the project’s steelwork was hot-dip galvanized to provide the necessary corrosion resistance, as well as providing a finish that had low maintenance requirements due to the difficulties in accessing the members after construction.

Other areas, mainly accommodation areas or rooms with daily occupancy, were painted with intumescent coatings to achieve the specific fire resistance requirements.

“For the cladding supports we supplied and installed the cladding purlins and rails, but had to work with the suppliers to provide higher than standard grades of finish to the cold rolled materials due to the corrosive atmosphere within certain areas of the building,” explains Bourne Steel Divisional Managing Director Nick Hatton.

A large and highly complex industrial plant has been enclosed by an undulating structural steelwork envelope.  Site logistics and difficult construction phasing resulted in great challenges to the fabrication and erection, which required modularisation and bold management. The construction above column-free spaces to such a complex timetable was impressive, sum up the judges.