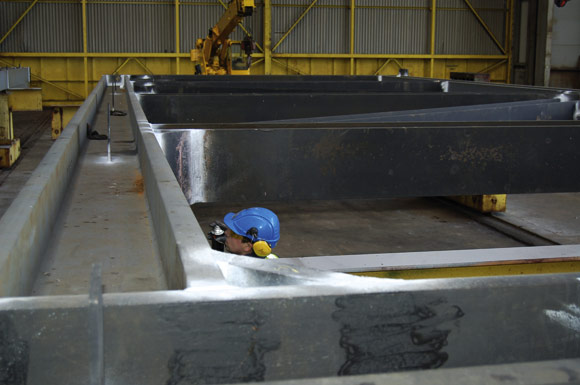 Seven large trusses were fabricated at the Harland & Wolff shipyard

Use of a shipyard for fabricating trusses has enabled the construction team to meet a tight construction programme on a major commercial and retail development. Martin Cooper reports that steel is playing a key role in the transformation of Belfast’s waterfront.

A hundred years ago Belfast was Ireland’s largest city and boasted a thriving economy based on shipbuilding, heavy engineering and linen production. However, as many of the UK’s major industrial cities have found out, prosperity doesn’t last forever as modern technology has replaced many traditional trades and jobs.

Years of under investment, a steady industrial decline and the well-publicised Troubles, combined to undermine Belfast’s confidence. However, during the last decade the city has experienced something of a renaissance. Northern Ireland’s capital city is currently in the process of reinventing itself as a weekend getaway destination and venue for trade and business conferences.

Central to Belfast’s grand plan is a vast regeneration project incorporating the Laganside waterfront, areas of the Harland & Wolff shipyard and the city’s main retail district.

Part of this overall scheme is the £300M Victoria Square project which will eventually consist of 75,000m² of retail space, basement parking for more than 1,000 vehicles, leisure facilities including a multi-screen cinema and 90 residential apartments.

Main contractor for the project is a joint venture between the Province’s two leading contractors, Farrans and Gilbert-Ash.

According to Finbarr McMeel, Project Design Manager for the joint venture, the job is essentially divided into five zones, three of which benefit from the quicker construction programme made possible by using steel.

Mr McMeel says that one of these areas, Zone 10, is the integral anchor of the whole project and incorporates the future House of Fraser department store, which on completion will be Northern Ireland’s largest department store. Being constructed entirely with steel from the lower ground level up, the building consists of four floors and a steel roof, sitting on two concrete formed park levels. 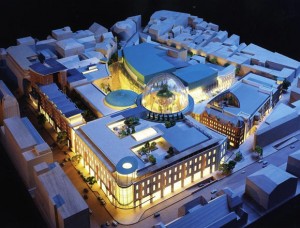 Victoria Square will provide Belfast with a new focal point 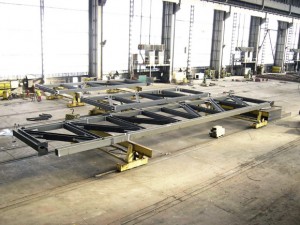 The largest truss weighs 100t and is 28m long 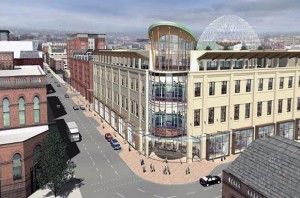 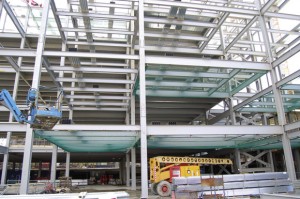 More than 2,500 t of steel has been delivered for the store 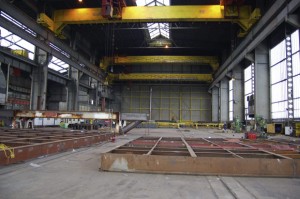 “We need to hand over the store by February 2007, a year before the rest of the project is scheduled for completion,” explains Mr McMeel. “They need the extra time to do their own fit-out.”

“We could never have expected to meet this deadline without using steel.”

By using steel the House of Fraser store will not only be completed ahead of the rest of the Victoria Square project, but it also gets the desired open plan design throughout its four retail levels.

Paul Johnston, Civil and Structural Engineering Director for BDP – the project’s structural engineer – backs this up and says the client was advised at a very early design stage that steel columns and beams were the only way to deliver his requirements.

“The store itself is basically a traditional steel structure, although there is a steel elliptically- shaped rotunda to be built into the building’s roof at the corner of Victoria and Chichester street,” says Mr Johnston.

Main steel contractor Fisher Engineering says it has supplied 2,500t of steel for the store’s beams and columns, while a further 17,000m² of metal composite flooring has also been delivered.

Another crucial element of the scheme, which also relies on steel, is the retail service yard. Situated adjacent to the House of Fraser, the yard will have four levels of residential units built above it, but to allow trucks to enter an unobstructed area with no supporting columns, seven large trusses will support the cavernous structure.

According to Mr Johnston the project’s funder, German bank Commerz Grundbesitz, insisted the yard contained no columns, thereby eliminating any chance of a truck hitting an obstruction.

“Supporting four levels of flats, the steel trusses are huge,” comments Mr Johnston. “There is no other material we could have used to get the required spans.”

The steel trusses are in fact so big they are being fabricated at the nearby Harland & Wolff shipyard (famous for building the RMS Titanic). Fisher Engineering says delivering the complete trusses from its yard in Enniskillen – which is approximately 90 miles away – would have proven to be a logistical nightmare. As space on-site is at a premium, the truss elements were delivered to the shipyard and welded together there.

Once complete, the plan is to truck them en-masse to Victoria Square over a couple of weekend nights. A 1,000t capacity mobile crane will be on-hire for the weekend to lift and place the units. According to Fisher Engineering, the local authority has already agreed to close all relevant roads for two nights.

“This isn’t the first time we’ve utilised the shipyard,” says Fisher Engineering, Managing Director Ernie Fisher. “It’s conveniently located close to the city centre and they’ve the craneage and space to carry out this kind of steel fabrication work.”

The seven I-beam trusses vary in size, from the largest which is 28m-long  x 6m deep and weighs close to a 100t, down to the two smallest units with 16m x 6m dimensions and weighing in at 35t each. The remaining four trusses weigh 65t and will measure 24m x 6m.

Once on site the trusses will all be positioned 12m above ground level, giving a 6m clearance below, and all will be positioned 90-degrees to the adjacent road. The trusses are mounted on bridge bearings. This was decided at the design stage as the best way of providing free movement without transferring tension to other parts of the structure.

Known as Zone 50, a distinctive dome (Faberge egg-like) will be the final piece of the project to be completed. Situated in the middle of the pedestrianised scheme, the glass dome will offer a focal point to the entire retail development, as three glass-covered streets within the development converge beneath it.

According to Mr McMeel, the dome support and outer rings were originally designed to be formed with concrete. However, this proved to be very problematical and using steel, he says, has not only simplified the job, but the time scale for completion has been shortened.

Housed within the dome will be a striking modern steel sculpture. Five lily pads will be arranged around a tripod stand, to a height of approximately 20m. Each steel lily pad weighs 3t and measures 7m x 5.5m. Fisher Engineering estimates it is supplying in the region of 200t of steel for the dome and sculpture alone.

The top lily pad will also act as viewing gallery, offering shoppers a vista of Belfast city centre and the adjacent Lagan River.

The third zone making extensive use of steel is the project’s leisure complex. Although this area is essentially a mixture of concrete and steel construction, Mr McMeel says steel trusses were essential to provide the open plan design and roof needed for the multi-screen cinema complex. Consequently everything from the second floor up is constructed with steel columns, beams and trusses.

According to Mr McMeel the steel trusses will speed up the construction process for this area as they will be trucked on to site in small sections and spliced (bolted) together on-site.

These trusses, once complete, weigh approximately 15t each and are 24m-long x 6m deep. “We are supplying nearly 900t of steel for this zone,” says Brian Keys, Fisher Engineering Contracts Manager.

Although these units are being fabricated at Fisher’s depot, Mr Keys says for logistical reasons the trusses have to be delivered in small sections. The only slight problem Mr Keys foresees is supporting the sections before they’re erected so as not to damage the flooring.

“We’ll probably have to erect a temporary structure for the trusses and we’re also conscious of having to keep the sections within the tower cranes lifting capacity,” he adds.

All in all, Mr Keys says the job will go to plan, and by using steel on this area of the job, will again speed up the whole construction process.

The entire Victoria Square development is scheduled for completion by early 2008.