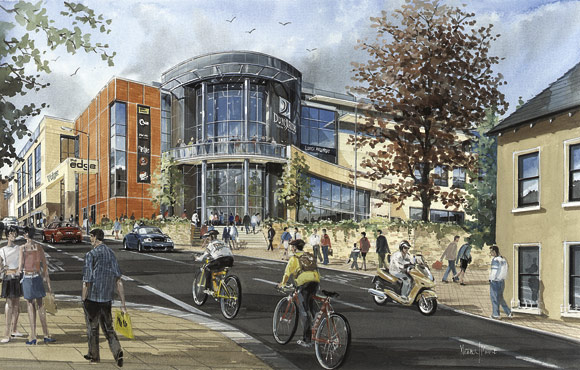 A new system for speeding the often critical process of constructing stair and lift cores won wide acclaim on its first outing, in a multiplex cinema  in Ireland, reports David Fowler.

Speeding up the process of building the stair and lift cores of multi-storey buildings could bring about significant savings on the overall programme. The first application of a system designed to do just that has succeeded dramatically on the 275,000m² Dundrum retail, office and residential development on the outskirts of Dublin. A stream of other projects is expected to follow.

The new product, Corefast, is a development of Corus’s established Bi-Steel system, in which two steel panels linked by friction-welded rods to form a ‘sandwich’ is filled with concrete after construction. Bi-Steel was originally developed for applications in industry. Research and development to make connections between modules easier and quicker to undertake on site has made the system cost-effective for civil and structural applications.

The €400M Dundrum Town Centre development is a prestigious new retail and leisure complex. It is arranged as a number of separate but linked buildings; Corefast was used on one of the satellite structures, the six-storey Cinema building. As well as a 12-screen multiplex cinema at the basement and first levels this also accommodates a pub, a restaurant, and retail space for a House of Fraser store on the top floor. 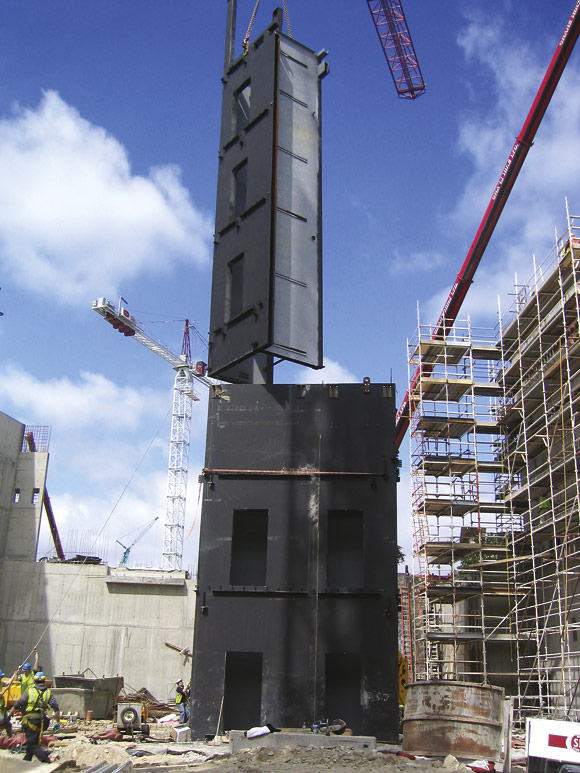 Three-storey core was erected in just four sections. Erection of rest of frame could start immediately 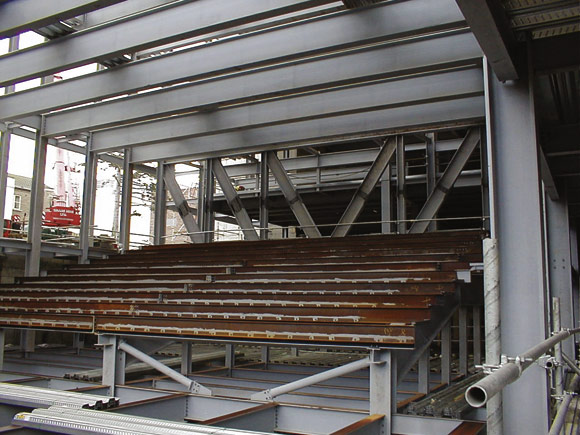 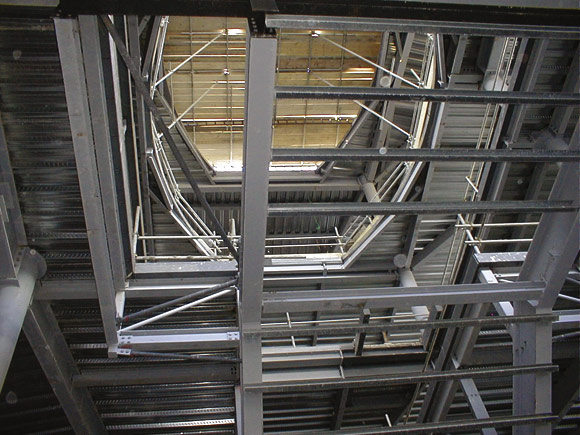 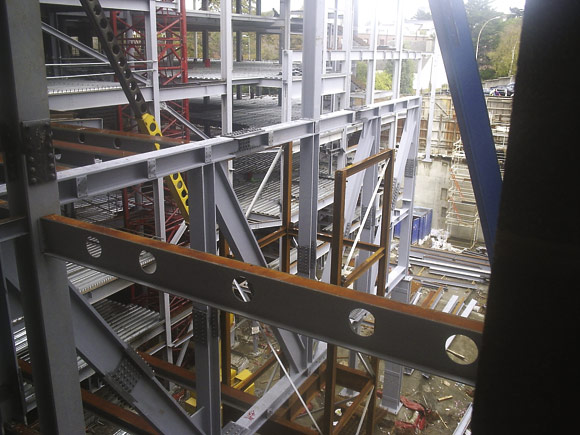 The building is steel-framed with composite floors. Pat Duffy, Project Engineer for structural engineer TJ O’Connor & Associates, says: “It’s a very unusual building, with irregular floor plans, a rotunda on one side, beams meeting at different angles and little repetition.”

Some of the beams span up to 18m, and because the bigger auditoriums are on the lower levels a number of complex lattice-girder transfer structures are needed, with spans of up to 20m.

The acoustic separation between the cinemas and the surrounding shopping and restaurant areas had a major impact on the detailing of the structure. “There was a significant amount of work in accommodating the acoustic requirements,” says Mr Duffy. For example, the seating terrace support beams connected into the main frame steelwork at different levels and in some cases varying angles. “The bearing details each had to be considered separately,” says Mr Duffy. However, he adds: “The steel contractors took it all in their stride.”

In common with many projects, the stair and lift core on the cinema building was on the critical path. Mr Duffy says there were a number of reasons for seeking an alternative to a reinforced concrete core.

“The main driver to look at alternatives was the programme. Steel erection would have been delayed because a concrete core has to be complete from top to bottom before the steel contractor can start on site.”

In addition, because the architect wanted a scenic lift, meaning that, in effect, one core wall was missing, there was a problem with lateral stability. “It would have been necessary to increase the concrete section considerably to get enough lateral support,” he says. “So we spoke to Corus, who said they could make it work at the size shown on the architectural drawing.”

The method was to use the Corefast system. Corus’s Bi-Steel division supplied modules to steelwork contractor Fisher Engineering, based in County Fermanagh. Fisher assembled these into larger units, prefabricating door and window openings where required and attaching all the necessary brackets and cleats. Site welding was kept to a minimum.

“A lot of co-ordination was involved,” says Mr Duffy. “We consulted with Otis, the lift manufacturer, at a very early stage so that we could include their setting-out information on Corus’s, Fisher’s, and our drawings.”

The entire 22m core was ultimately supplied to site as just four units, coated with intumescent paint inside. Erection of each module took around two hours. The whole core was completed in five working days over two and a half weeks, six weeks quicker than a conventional core would take. Once all four modules were in position the horizontal joints were site-welded. The vertical joints used the Corus Surefast connection system.

The core was initially attached to the foundations using cast-in holding down bolts. This  provided adequate stability during construction without the need for propping. The concrete infill was done in two stages, the first pour being completed before the installation of the last two core modules. The second pour was carried out when the main frame and top floor decking was in place to provide a safe working platform.

Mr Duffy says the installation went very smoothly, with the only snag being four holes for safety lines which had to be enlarged from 27mm to 35mm. “All the fixings were in the right place and all the beams connected in,” he says. “It was very quick to erect, even though everyone was exercising a lot of caution because it was the first one. On a future project, where the contractor had done it before, it would be even quicker. The quality, the alignment and plumbness, were very good.”

Ernie Fisher, managing director of steelwork contractor Fisher Engineering, says: “We were pleased with how it went. We would prefer to work that way than to fix to a concrete core. You can detail in the exact position of the connections for incoming steelwork rather than having to leave pockets in concrete. It was much faster for the erection of the rest of the steel frame,” he says — though he adds that it is probably preferable, as on this project, for the core and the rest of the steel frame to be the responsibility of a single contractor.

TJ O’Connor’s Mr Duffy adds that in the light of experience at Dundrum he would consider Corefast to be potentially beneficial on any project where timing was crucial, and particularly where there was no substantial reinforced concrete work other than the core, such as retaining walls or underground structures.

Of the Dundrum cinema building he says: “We all learned a lot. Everyone invested a lot of time and effort to make sure it all went well on site… there was a lot at stake. But it turned out very well.” 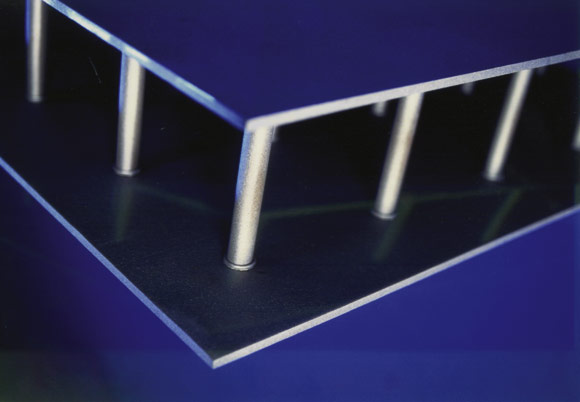 Bi-Steel was originally developed some 10 years ago for high load applications in industries such as petrochemicals and defence. It consists of two steel panels connected by an array of friction welded steel rods. The space between is filled with concrete to form an extremely strong composite structure.

Originally, larger assemblies were constructed by welding Bi-Steel modules  together. Corus undertook research and development to allow simpler mechanical or bolted connections to make Bi-Steel cost-effective for markets such as construction — in shear walls, for example. The result, introduced in 2003, was called Surefast.

Corefast was a further development with the specific application of stair and lift cores in mind. As at Dundrum, for this application the Bi-Steel panels are formed into bigger assemblies and delivered to site as prefabricated modules which can readily be fitted together. Door and window openings can be pre-formed and even staircases can be pre-installed.

Bi-Steel Construction and Industrial Manager Scott Kent says Corus can supply the plain modules, which is likely to be preferred if the client is a steelwork contractor. However, if the client prefers then Corus can offer a complete turnkey solution covering material supply to installation as well as subcontracting the fabrication and erection work.

Kent says the system should be cost-effective for six storeys upwards. The size of the module as delivered to site is only limited by what can be transported and by site crane capacity. Typically a module is around 13m or three storeys in height.

Bi-Steel recommends building three to six storeys of core and leaving this unfilled while the rest of the building is erected around it. However is is possible to erect the entire core in advance of the building frame, subject to design checks. The concrete infill is not normally needed for stability until the cladding is fixed.

System benefits include speed, the ability to erect on average one storey a day taking the lift off the critical path. As at Dundrum, large openings can be accommodated in the lift shaft. In addition the core walls need only to be half to two-thirds as thick as a concrete core of equivalent strength. “This can represent a considerable lettable area,” says Mr Kent.

Following Dundrum, Bi-Steel has received a number of enquiries for using the system and has been investigating which of them would be practical applications. The first is likely to go on site in spring this year. “From then we expect a steady stream of work,” he says.

Dundrum Town Centre, 8km to the south of Dublin city centre, will mark the first venture into Ireland by such retailers as House of Fraser and Harvey Nichols. The 11ha, €400M development will  feature a landscaped civic square with a restored mill pond, the multiplex cinema, and a theatre as well as 100 retail outlets on three levels, integrated around an existing residential area. The retail outlets are due to open early next month (March) with the cinema following in autumn.