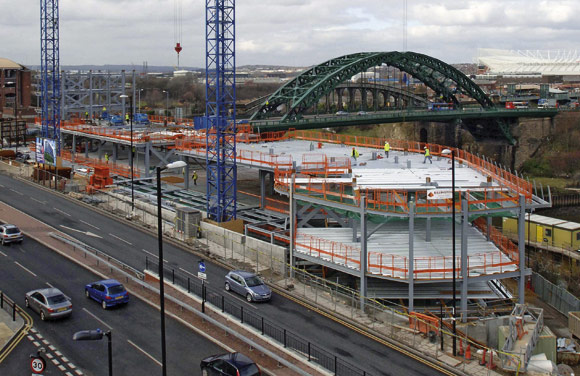 The Echo building will boast views across the River Wear

Rising up on the site of a former newspaper office, a new steel framed residential block is set to become one of Sunderland’s most prominent landmarks. Martin Cooper reports from Wearside.

The name Sunderland was once synonymous with shipbuilding and football. Although the city’s once proud shipyards ceased manufacturing twenty years ago, and the local football team has known much better seasons, Sunderland is currently undergoing an image makeover.

High-tech industries have moved in to replace traditional manufacturing trades, the local university has expanded with the construction of a new campus and new theatres and art galleries have all contributed to give the city a new vibrancy.

Sunderland is also undertaking a regeneration programme, primarily along the Wear River which bisects the city.

A number of river front businesses have relocated to out-of-town locations in recent times, including the Sunderland Echo. The local newspaper vacated a large and unloved 1960s concrete building which has recently been demolished to clear the way for the new Echo Building which is set to become one of the most prestigious residential addresses in the North East.

Covering a plot approximately 100m x 20m, the site is adjacent to the Wearmouth Bridge and within easy walking distance of most of the city’s amenities. 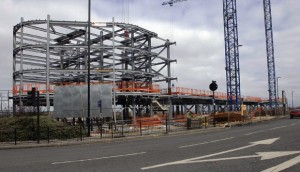 The building is being constructed in phased developments, three levels at a time

Provisionally named Echo 24, the building will consist of 179 apartments on 11 storeys, a single commercial level at ground level and three underground floors of car parking.

The block has been designed as a braced steel frame with multi-deck composite floors, sitting on top off three steel framed car park levels, which are partially underground as the structure is built on a sloping site.

Steelwork contractor Billington Structures began erecting steel at the end of January and expects to complete the main structure in August. The company will eventually fabricate and erect more than 1,500t of steel for the job. Billington’s contract also involves erecting a curved steel roof, which will be bolted together from fabricated steel sheets.

Once the old building was demolished and new foundations installed, the three car park levels were constructed. Apart from concrete retaining walls, the car park levels are part of the overall steel framed building.

Above the car park, at ground level, there is a retail level. Dave Thompson, Project Manager for main contractor Tolent Construction says from here on up the building is being constructed in a series of phases.

“Once the ground level concrete slab was formed, steelwork for residential levels one to three began,” explains Mr Thompson. “After these levels are complete the slab for level four will be poured allowing steelwork to be erected to level seven while simultaneously Tolent can work on the floors below level four.”

Each poured slab acts as a ‘crash barrier’ stopping any objects falling on workers pouring and fitting out the slabs below, and giving machinery such as access platforms a firm base to work on for steel erection.

Working in this way, Billington and Tolent are able to organise the infrequent concrete deliveries around the more frequent steel deliveries. “This is very important,” Mr Thompson says. “There’s only one access road to the site and any infringement or traffic disruption isn’t looked on kindly by the local authority.”

The phased construction method will continue in this manner, with residential levels seven to ten being completed next and finally level 11, which is in fact two levels as it contains 11 duplex apartments. Mr Thompson estimates each construction phase is completed every five weeks.

The approximately 100m-long building is architecturally split in half by a glass atrium which extends from ground level to the roof on the south face, but only up to level three on the north facing river facade. 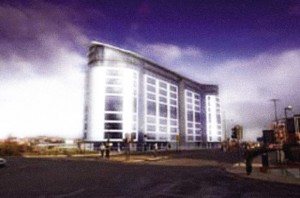 Echo 24 is set to be a Sunderland landmark

“To give the ground level retail floor a more open feel, the building is braced in lateral directions and intermediate columns begin on the first residential floor,” Mr Horne explains.

All columns supplied by Billington for the project are 356 x 406UCs at the lowest level, reducing floor-by-floor to 203 x 203UCs on the uppermost floor. A variety of steel beams will be used with the largest at 10.2m-long and weighing 3.5t each.

These large transfer beams hold the slab and columns above the retail level and in affect run beneath the first apartment floor, with rows of these 3.5tt members spanning the entire length of the building.

An interesting architectural feature of the building, Mr Horne says, is the fact that the north facing duplex level is slightly set back by 2.5m, and consequently internal columns become external columns for the uppermost floor.

At the beginning of 2007 Billington is scheduled to return to the site for the installaton of the curved steel roof and a 5m-wide galvanised steel balcony around the retail level to provide a pedestrian promenade.

Although other materials for the structure were looked at during the planning stage, Mr Thompson of Tolent says steel has meant the project is progressing quickly and a phased hand-over of apartments is due to begin early next year.

“Access to the site is restricted and by using  steel we have reduced deliveries,” Mr Thompson says. “Concrete wasn’t really an option as there wouldn’t have been room for pumps, formwork and all the other associated kit.”

Comprising two and three-bedroom apartments and priced in the £200K and upwards bracket, the units have been selling off-plan like the proverbial hot-cakes.

A spokesperson for the appointed estate agent for the project, Sanderson Young, says more than 70% of the apartments have already been sold and the development is set to be a city landmark and one of the most desirable addresses in the area.