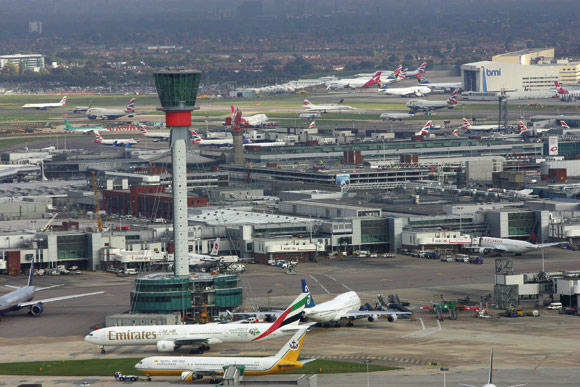 Speed is everything at a modern airport which is why designers were swayed by the fast construction time of steel for a new control tower at Heathrow. Being able to produce a more slender structure was another major plus point, reports Martin Cooper.

Designed by Richard Rogers Partnership, the £50M air traffic control tower is set to become one of west London’s most distinctive landmarks. It is said to feature the very latest in air traffic technology and offers controllers a 360-degree cone vision – said to be the best viewing of any control tower in the world.

According to NATS, the old tower was basically in the wrong place and too small to meet the increased demands expected once Terminal 5 opens in 2008.

Taking the new terminal into consideration, a more centrally located tower was deemed necessary, one that could overlook the entire expanding airfield. So a position close to Terminal 3 was picked as the airport’s most geographically central position.

“Most of the work could only be carried out at night, when the airport wasn’t functioning, Mr Whitten says. “Logistically we had to assemble parts of the tower individually overnight, trucking in steel sections each time.” 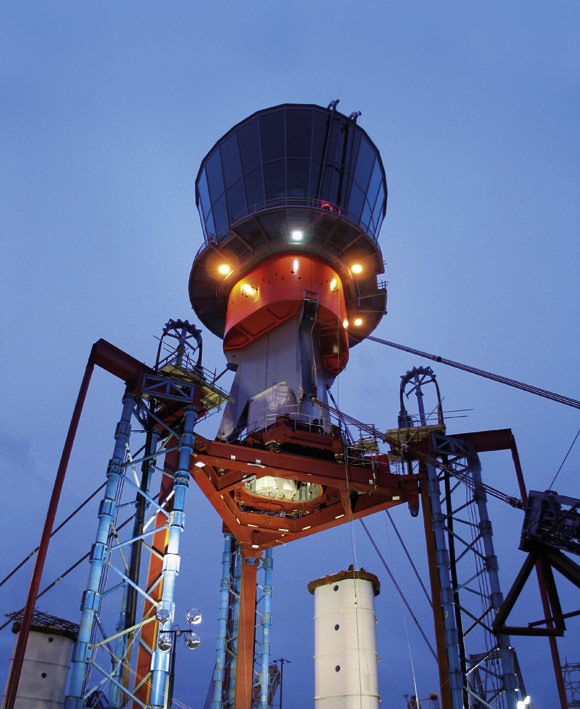 The tower’s cab was prefabricated off-site 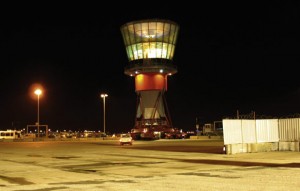 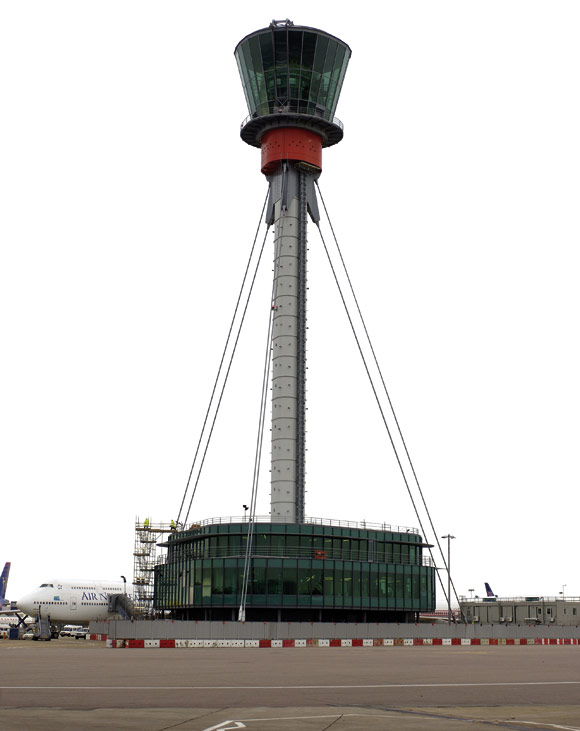 Mr Whitten explains that any other material, such as concrete would have resulted in a much larger tower mast and a longer construction process requiring huge numbers of deliveries airside to tower site.

Richard Matthews of Arup and Engineering Leader for the project says during the planning stage a slender design was chosen to lessen the environmental impact.

“A cable stayed structure lends itself to steel,” Mr Matthews says. “If we had used a traditional cantilever concrete tower the mast would have been much wider.”

The finished control tower has a base diameter of 4.8m, and Mr Matthews reckons with concrete the base would have been closer to 15m.

The weight of the structure also played a critical role. To minimise any impact on the airport’s busy operation the tower’s cab was pre-fabricated on a remote site just inside Heathrow’s southern boundary. Once complete it was transported 2km across the airfield to its permanent position. Weighing 862t, the fully equipped cab’s journey by specially equipped lowloader was one of the heaviest transportation jobs ever to have taken place at an airport.

“Constructing the cab and then moving it would never have worked with concrete,” Mr Whitten explains. “It would have been too heavy.”

“And building the cab off-site allowed the foundations to be laid at the same time; the project was a model in parallel construction,” Mr Matthews adds.

Importantly, building the cab at its permanent location would have meant taking a number of aircraft stands out of operation and resulted in considerable impact on the day-to-day operations of the airport. Prefabricating it at a separate site caused minimal disruption and allowed steel to be delivered throughout the day, something which wouldn’t have been possible close to Terminal 3.

The 30m-tall cab’s insulated membrane roof structure was also assembled at ground level to reduce the risk associated with working at height and to allow concurrent assembly of the supporting structure.

A specially designed temporary steel frame attached at the base to lower its centre of gravity and provide the stability was used to transport the tower’s roof safely. It was lifted into position using a 500t capacity mobile crane, and the temporary works enabled appropriate controls to be introduced for its safe installation. Once in position, the prefabricated roof was supported by temporary hydraulic jacks situated inside the cab. This allowed the load to be transferred from the crane to the permanent steel glazing mullion supports prior to being bolted into place.

The tower’s steel cab and tripod (the tripod takes the supporting stay-cables) was fabricated and assembled in late 2003 and then moved into positioned in November 2004.

Then during the spring of 2005, the tower was progressively erected to its 87m height using a hydraulic jacking system that allowed seven steel mast sections to be installed beneath the cab.

The seven steel mast sections consisted of one 80t 14m-long section – the base – and six 60t 12m-long pieces. Each of these mast sections was individually trucked into the site during the night when the airport operations are reduced.

Each individual jacking process allowed one mast section to be inserted and bolted into position. In this way, the mast was progressively erected to its final 87m height, with the tower’s cab already in position.

Every one of the steel mast sections has a triangular profile with a maximum dimension of 4.8m. Fabricated initially by Watson Steel, the giant hollow “Toblerone” shaped pieces were then fitted out with an internal steel staircase, associated landings and lift shaft at Kvaerner in Sheffield. All of this internal steel work was also supplied by Watson Steel. Kvaerner were also employed by Watson for the final assembly and machining to length of the mast sections.

Mr Whitten explains that each section had to be road transportable, and consequently the longest section is 14m. “Each mast section also includes a myriad of service holes of varying sizes.”

Once the final mast section was bolted into position the temporary guys remained in place while the three-storey base building was erected.

Enclosing the steel mast, the base building consists of steel columns and beams. Mr Whitten estimates that approximately 250t of steel work was supplied for this part of the structure.

The final piece of the construction jigsaw was the removal of the temporary guys and the installation of the supporting 150mm diameter cable stays which are attached to the tower’s tripod section.

Now complete, the new tower comprises a full height glazed visual control room supported by a steel mast and three pairs of cable-stays anchored to the ground. The steel mast provides access to the control room via the internal lift and staircase plus one external lift.

“We initially looked at a number of materials, but no other product but steel would have allowed us to work at two different locations and get the mast fitted out off-site before it was installed,” Mr Matthews sums up.