The Next big thing 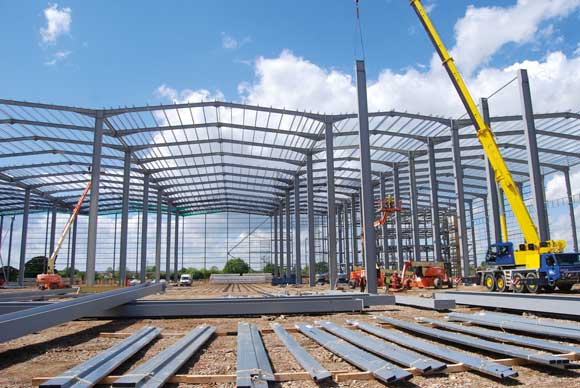 A large 25m-high distribution centre for Next is rapidly taking shape on the outskirts of Doncaster.

One of the largest jobs under way in this buoyant marketplace is a new distribution centre and offices for Next. Occupying a footprint of 58,000m², this huge structure is under construction at IDI Gazeley’s 115-acre G.Park in Doncaster.

As with the majority of distribution centres, the Next facility is a steel-framed multi-span portal frame measuring up to 380m in length and with spans of up to 37m. One end of the structure features an attached five-storey office block built around precast lift cores.

A steel solution for the construction of this large distribution centre was the preferred option for a number of reasons, most notably the speed of construction, the long span qualities needed and cost efficiency.

“The client wanted this bespoke building to look modern, clean and attractive. It needed to meet the demands of the current business with a view to future flexibility and expansion,” explains SiCa Partner Simon Noblet.

“The building design has evolved from, and is subservient to, the sophisticated materials handling equipment within. It is also hoped that this new warehouse will be a pleasant place to work in with first-class facilities for both warehouse and office staff.” 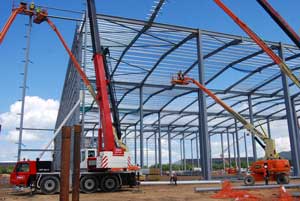 Columns are up to 25m high 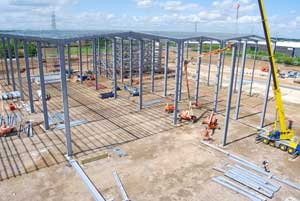 Coordination between steel deliveries and the erection has been key

The steel frame’s columns are set at 8m intervals, which correspond with the internal racking system’s geometry. Likewise the portal spans have also been designed with the building’s internal functions in mind.

Four of the portal frame spans are 29.3m, but along one elevation there is a 37m span, which has been designed to accommodate a large multi-storey mezzanine structure.

This wider 37m span will also accommodate the facility’s bespoke docking system where truck’s trailers are disconnected outside the building and then automatically transported inside for loading.

Between the 37m span and the first of the four 29.3m portals there is one narrower 18m wide portal. This portal was made smaller because of the project’s footprint constraints.

Concept design for the project was by Adept Consulting Engineers, however detailed design of the complex steelwork was carried out by Billington Structures.

“We’ve also designed flexibility into the steel frame,” explains Adept Consulting Engineers Project Manager Erol Erturan. “The mezzanines have been erected as a two-storey structure, but a third level, if required, can be accommodated in the future as the distribution centre has a 21m height to the underside of the haunch.”

Stability bracing will also render the internal mezzanine floors independent of the main building, enabling them to accommodate a complex system of tracks for an automated handling system.

The structural design includes the overall building being split into five separate independently stable zones by party walls, which will ensure that the warehouse remains operational in the event of a fire in one of the compartments.

The compartments are not all the same size and the two largest are five spans wide and accommodate the Centre’s high bay racking system, which will be serviced by robotic cranes.

The project also includes a conveyor link bridge from the north eastern corner of the building to transfer stock to the existing Next warehouse, across Holme Wood Lane.

The bridge will be a four span 120m-long structure formed with a series of trusses to accommodate the double deck configuration. The lower deck will feature conveyor belts for transporting goods, while the upper deck will be a pedestrian thoroughfare for the workers.

Billington CEO Mark Smith, said: “The construction of a distribution warehouse on such a large scale involves a great deal of complex planning.

“The fact that Bowmer & Kirkland has once again chosen Billington Structures to provide the structural steelwork for one of their most significant and prestigious projects, and indeed clients in Next, is testament to Billington’s quality, reliability and performance.”

Summing up the project Bowmer & Kirkland Project Manager Ben Howard says: “Erection of a 25m high distribution facility, with ancillary offices and building services, doesn’t come without its own challenges.

“Early access dates and a tight overall schedule dictate a correctly sequenced approach by ourselves, which guarantees a defined outcome for our client.

“Utilising specialist contractors in their own fields early on is essential for the co-ordination of design, erection sequencing and programming alongside interfacing elements. This gives us the best opportunity for a achieving our project goals.”

The Next distribution centre is due to be complete by early 2016. 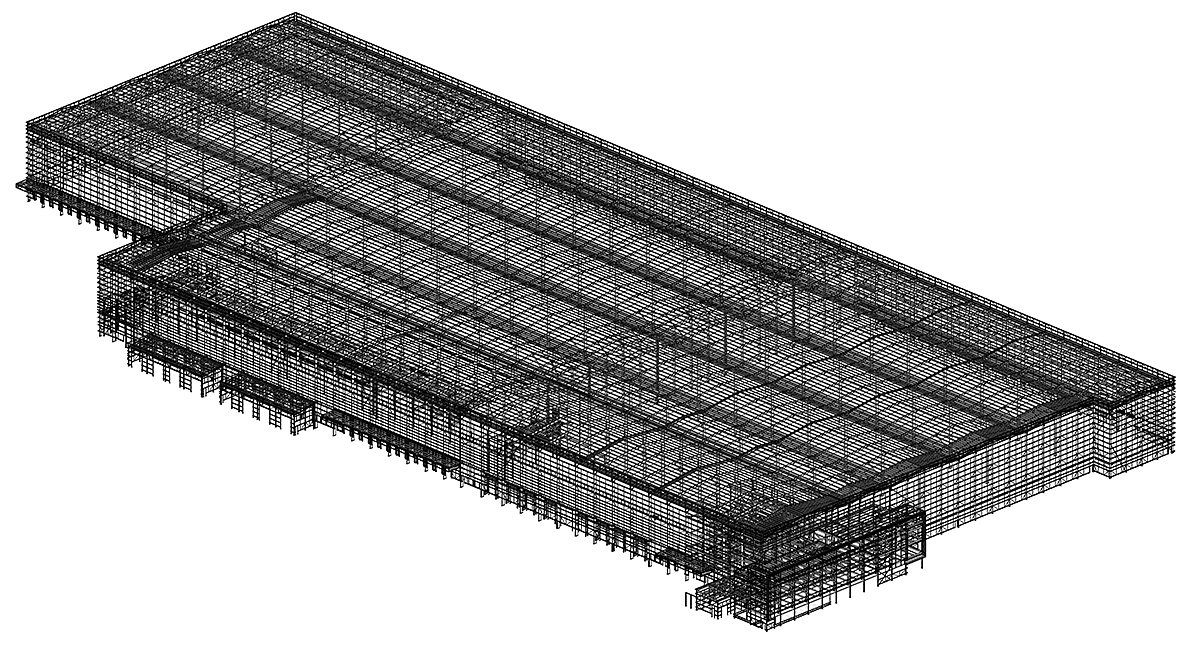 Billington Structures erected the main frame for the Next distribution centre in 14 weeks. In order to not clash with the site’s other trades, the company then erected the mezzanine floors on a return visit later in the programme.

Prior to the steel erection starting, Billington had already begun its onsite preparation work and had started stockpiling steelwork.

“The columns are 25m long and up to 9t each, so we could only transport them on a truck to site two at a time,” explains Billington Structures Contracts Director Brian Turton.

“That’s why it’s important to have steel deliveries carefully co-ordinated and steel stockpiled on site in the respective working areas… to ensure that we could give continuity for the erection teams on site.”

The portal rafters were brought to site in two sections and then erected in pairs. Using two mobile cranes, the rafters were lifted into place, bolted to their respective columns and then bolted together at midpoint before being released from the cranes.