Posted on May 13, 2020 by NSC in Projects and Features, This month's featured stories 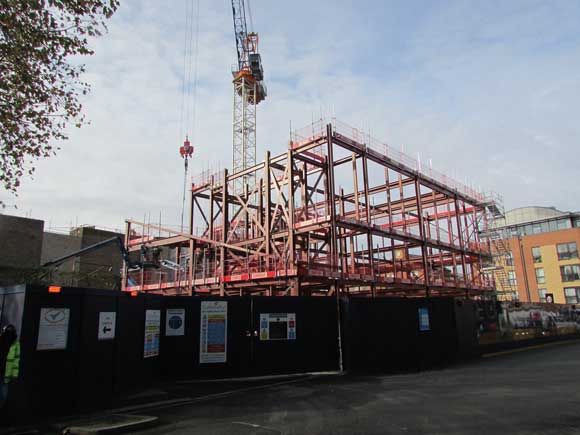 The theatre forms part of the much larger regeneration programme for the Somerleyton Road area of Brixton.

A lightweight framing solution, which could also efficiently provide long spans, meant structural steelwork was the ideal material for a new theatre in Brixton, south London.

The Ovalhouse has been designed by Edmund Wilson of Foster Wilson Architects as a fully-accessible space for both artists and audiences. It will contain two theatre spaces, rehearsal studios as well as high-quality training facilities and spaces designed to be used by the local community.

Ovalhouse, which is currently based in nearby Oval, has built its reputation on supporting new artists, working with young people and communities, and putting on shows.

Deborah Bestwick, current Director of Ovalhouse, says: “We’re bringing theatre back to Brixton. It is wonderful to see the structure go up and the space take shape. We look forward to welcoming new friends as audiences, participants, trainees and new staff members.

“The theatre will offer a new generation of theatre companies and artists a space to develop their work in Brixton and beyond. We are hugely grateful to our funder Arts Council England and partner Lambeth Council, and to the charities who have kick-started our fundraising campaign including Cockayne, The Wolfson Foundation and The Garfield Weston Charitable Trust.” 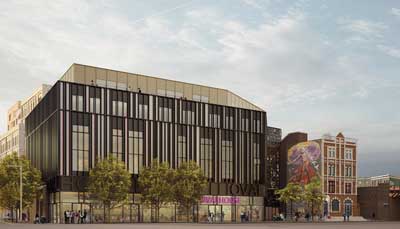 Visualisation of the completed theatre. 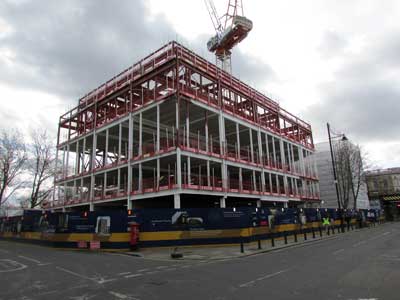 The design incorporates a steel braced frame, with much of the bracing located in the cores. 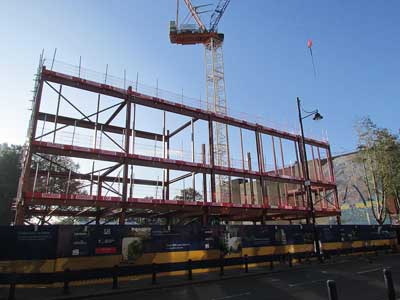 Steelwork was chosen as it provided the most efficient solution for the theatre’s complex design.

According to Foster Wilson Architects, the design of the new theatre building is purposefully robust, with exposed materials, such as the steel frame, that are capable of adaption to individual performances, in keeping with the spirit of studio theatre.

Externally, the design of the building relates to the industrial architecture of Brixton and the early street lighting of nearby Electric Avenue, with a new anodized aluminium facade that incorporates a range of lighting and signage.

“Using structural steelwork was the obvious choice for this project as a lightweight frame was required because the Victoria underground line runs directly below the site, preventing any piling,’’ explains Conisbee Associate Denis Kealy.

“We also needed a framing solution that could efficiently provide the long spans and column-free spaces within the building.”

An 800mm-thick ground-bearing raft foundation was deemed to be the best solution for the site, onto which a concrete box basement was constructed, with the main steel frame starting at ground floor.

Overall, the steel frame is braced for stability, with most of the bracing located in lift cores, as well as in one elevation that abuts an adjacent building and has no windows.

Steelwork supports precast planks to form the floors and this solution was chosen as the underside of the flooring will be left exposed in the completed building, along with some steelwork elements, to fulfil the architectural vision.

The design of the building’s frame includes a number of spaces of varying sizes on each floor, most of which require transfer structures to take into account the changing column lines.

The most significant parts of the steel frame form the main theatre, which is a triple-height space on the ground floor. A total of four Vierendeel trusses span the performance area and create the column-free space. The trusses are 11m-long × 4.9m-deep and each weigh 11t when fully-assembled.

As well as forming the roof the main 200-seat theatre, the trusses create a gantry for maintenance walkways and scenery storage within their depth, while also supporting the floor above.

“The trusses are working very hard, they support third floor precast planks that sit on the top chord as well as supporting a line of columns that extend up to roof level, which are positioned roughly at mid span,” says Mr Kealy.

Space was at a premium during construction, and bringing the trusses to site was a challenge as there was not enough room for them to be delivered in one piece.

“The trusses had to be brought to site piece-small, assembled within the theatre’s footprint and then erected using a 250t-capacity mobile crane,” says Mifflin Construction Contracts Director Dave Ornsby.

Cross sections of the theatre, highlighting the numerous spaces accommodated within the building.

The main theatre is an acoustically-treated box-in-box, with a double row of columns and acoustic pads on all connections, which will prevent any noise escaping or getting in.

A similar acoustic treatment approach has been taken with the structure’s second and smaller theatre space, which is also located on the ground floor.

With no requirement for a gantry, the single storey-high second theatre has been formed with a series of 8.5m-long UB sections that span and support the ceiling.

Adjacent to both theatre spaces on the ground floor, the main double-height foyer is another column-free space formed with a series of 8.7m-long UB sections.

Highlighting the complexity of the structure’s steel frame, there are two double-height rehearsal spaces sitting at second floor, adjacent to the main theatre’s gantry level.

The fourth floor accommodates open-plan offices and features the project’s longest spans. Again, a series of UBs form the 12m-long spans of these spaces, while also supporting columns on the uppermost floor that divide meeting rooms from a kitchen and a production studio.

For the installation of precast elements and the steelwork erection, Mifflin Construction primarily used the site’s tower crane. The exceptions to this were the areas around the tower crane, where 60t-capacity and 95t-capacity mobile cranes had to be used, as minimum radius could not be achieved by the tower crane itself, as it was too close.

The Ovalhouse is scheduled to open its doors in spring 2021. 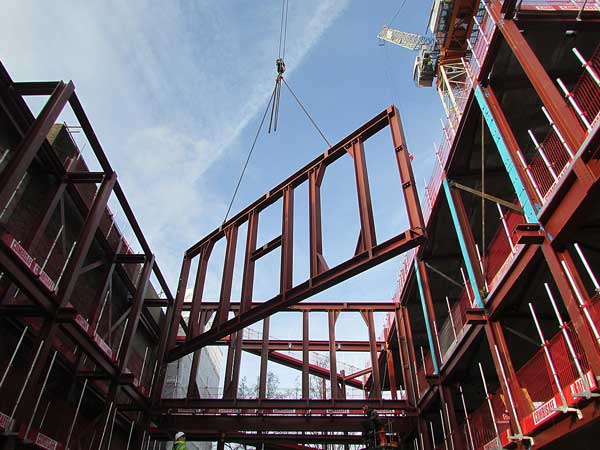 David Brown of the SCI offers some comments on the design of Vierendeel trusses.

The primary reason for choosing a Vierendeel truss is the opportunity to use the space within the depth of the truss – at the Ovalhouse, the space is used for all the essential paraphernalia which must be located above the performance area. The term “truss” is hardly appropriate as a Vierendeel truss is a continuous frame, with rigid joints at the nodes. The bending moments within the frame increase towards the supports, so Vierendeel trusses are often characterised by vertical members which increase in size from the centre of the span to the supports, to accommodate the larger moments. It is generally not convenient to change the depth of the chords, so these are usually the same size throughout.

The joints between the chords and vertical members will be modelled as ‘rigid’ in the numerical analysis and it is important the real details deliver this assumed behaviour. The joints must obviously be strong enough, but must also be sufficiently stiff to behave as rigid joints. Often, joints in Vierendeel trusses are fully welded, but this was not possible at the Ovalhouse as the truss had to be assembled on site. The haunches shown in the photograph give greater resistance for the bolted connections between the most heavily loaded vertical members and the chords.

Vierendeel trusses are often one of the possible solutions to questions set in the Institution of Structural Engineers examination – so knowing how to determine an approximate bending moment diagram could be a useful skill. A simple approach is to assume a point of zero moment at the mid-point of every member. A worked example of this method can be found in older versions of the Steel Designer’s Manual.

A simple approach to the analysis has particularly relevance for a Vierendeel truss – named after Arthur Vierendeel, a Belgian Civil Engineer and Professor. He is credited with the following opinion: “When constructing in metal the dimensions must be determined a priori by aesthetic considerations and only afterwards should mathematical formulas be used”. One wonders what Professor Vierendeel’s view would be of the modern dependence on software to analyse the form of structure that carries his name.

Advisory desk articles 293 and 294 discuss the joints in welded Vierendeel trusses with particular reference to the web panel zone within the joint.