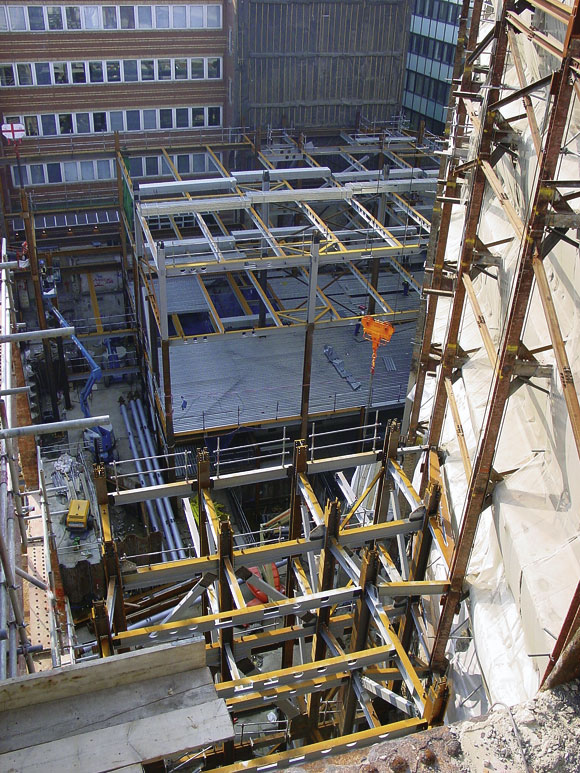 The retention of London’s historical architecture is today paramount in developers plans for new buildings. Where once old buildings may have succumbed to the demolition contractor’s wrecking ball, many older buildings now have preservation orders and refurbishment is the order of the day.

Nowhere is this more evident than in the City of London where new office space is at a premium and a number of recent developments have seen listed facades retained with a new – and sometimes higher – structure erected behind.

John Robertson Architects states that the redevelopment of 16-18 Finsbury Circus and the adjacent 18-31 Eldon Street is however much more than a facade retention job. The design strategy is essentially the amalgamation of what were three disparate buildings into one unified ‘ring of development’ potentially creating one corporate headquarters building.

This project involves the redevelopment and restoration of two Grade II listed buildings in London’s Finsbury Circus Conservation Area. The client, Prudential Assurance, was granted planning permission by the Corporation of London in February 2004 and was strongly supported by English Heritage and City Heritage.

The Finsbury Circus structure is a grand Edwardian crescent terrace and was originally designed by Gordon & Gunton Architects in 1915 and completed in 1926. The building’s Portland Stone facade and its main staircase are key features of particular architectural and historic interest within the Grade II listed building, and the main challenge is to knit new elements of the building into the retained existing structure.

Overall the site originally contained three interconnected buildings: the listed seven-storey buildings on Finsbury Circus; 18-25 Eldon Street which was a Victorian building and has been completely demolished, and 26-31 Eldon Street, a Portland stone faced Grade II listed building which is being retained.

The £50M scheme comprises 17,500m² of offices around a central atrium and 900m² of retail space fronting Eldon Street. This will create a new nine-storey office block with basement covering the entire site.

John Fuller, Project Manager for Bovis Lend Lease says a steel frame for the new build section was initially looked at during the conceptual stage. “Overall using steel was considered as the best option,” he says. “Especially as the existing structure is steel framed, so steel to steel connections is a more practical solution. The choice of steel assisted a quicker construction process.”

However, marrying a new frame to an old steel framed structure is the most challenging aspect of the structural works on the project, Mr Fuller says. 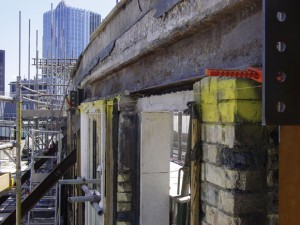 The Finsbury Circus Facade is being retained 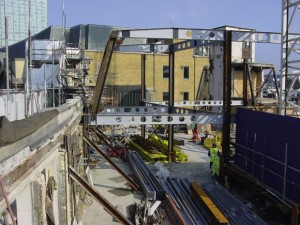 The three separate buildings will be combined into one

The first major part of the work was to provide temporary support for the existing Finsbury Circus and Eldon Street facades and retained listed structure behind. The retained structure was braced with steelwork to ensure stability was maintained during demolition.

Rod Potts, Bourne Steel’s Divisional Manager comments: “Although the Finsbury Circus frontage is being retained, some major works have been undertaken to raise the existing floor height.”

The idea is to have a regimented 3.43m floor height throughout the project to match the existing storey heights. To bring the retained Finsbury Circus building into line with the new structure the screed has been removed from the existing concrete floors to reduce their levels while a number of supporting beams has also been reduced.

In the centre of the retained structure there were a series of fireplaces and chimneys which began at basement level. These have been removed and their large supporting beams which measured 700mm deep have been replaced and reduced.

“Once the chimneys were removed it wasn’t necessary to have such large supporting beams,” Mr Potts explains. “The chimneys went back two bays and the first beam of two on each floor is being reduced to that the floor height is increased,” he adds.

Because these beams are connected to the retained facade it was impossible to remove them so Bourne Steel is inserting channels either side of the beams and then cutting away approximately 300mm off the bottom flange. The second supporting beam on each floor is being replaced with a new slimmer beam measuring 280mm deep that is being raised up into the depth of the slab.

The other major element connected to this part of the project has seen the original floorplan demolished down to the sixth storey and a new seventh floor and roof added. This will then marry into the overall floorplan of the new building. The original roof of this building housed a small plant room, and this will be moved to a new section of the Eldon Street building.

Barry Dobbins, Regional Director of Waterman says this part of the project called for some lengthy surveying and analytical calculation of the structure to ensure the load capacity of the existing columns and floor plate would cope with an extra floor.

He says strengthening was needed to the columns in the form of additional plates to supplement overloaded columns.

Mr Dobbins adds that using steel has brought more flexibility to the project. “As well as knitting together old and new, steel has also allowed the floor build to be more compact with all services accommodated between the beams.”

Running parallel with the Finsbury Circus building, Eldon Street originally consisted of two separate buildings. The facade of the listed building at 26-31 Eldon Street is to be replicated on the adjoining new structure with a Portland stone facade to match the existing facade. A new central bay entrance hall will provide access from this side of the development.

The new build section along Eldon Street and abutting the Finsbury Circus structure is a traditional steel column and beam structure consisting of eight-storeys and a steel-framed roof which will be glass clad. Set around a trapezoidal 11m x 18m atrium the new structure has a predominant grid plan of 6m x 4m with 415mm deep fabricated beams with 250mm deep penetrations.

Mr Potts explains that Bourne’s contract also includes erecting steel decking for the new build section, and building a novel arrangement to allow cherry pickers to stand on the decking without causing any damage.

“We’ve made five sets of supporting frames from 305UCs which constrain the wheels of the picker and prevent any damage to the decking,” he says. “We only have three pickers but making five frames means we can always move a picker to a spare frame.”

The cherry-pickers have initially erected steelwork up to the second storey by working at basement and ground level. As Mr Potts explains, the frames will be used on the second level to allow erection up to the fourth storey, with the process repeated on the fourth level and the sixth floor.

Importantly, Mr Dobbins adds the new structure, although basically a free-standing building, takes all of the lateral stability for the entire project. This called for some intricate foundation works as the new piles had to avoid existing pad foundations.

Two artesian wells were also discovered under the demolished section and these had to be capped with new piled foundations – mostly steel ground beams – built over them. Bourne erected raking columns around the perimeter of the site at lower basement level to avoid transfers which would have otherwise impacted on the below ground headroom.

The project is scheduled for completion by September 2007, when central London will acquire a modern office block built around and incorporating restored listed features.