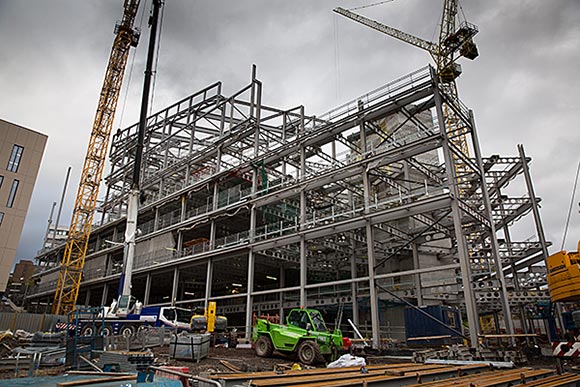 Long spans and the ease of internal reconfiguration over the life of the building were key reasons for choosing a steel solution for a research facility in Glasgow. Martin Cooper reports.

To help boost economic development, top researchers, engineers and project managers from academia and industry are being brought together to work in a state-of-the-art building at the University of Strathclyde in Glasgow.

Known as the Technology and Innovation Centre (TIC), it will provide office, conference facilities and laboratory space for students, academics and industry experts to work jointly on solutions to challenges in sectors as diverse as power and energy, renewable technologies, photonics and sensors, advanced engineering, pharmaceutical manufacturing and bio-nano systems.

The TIC has already attracted major industrial partners and at £89M, the project is the University’s single biggest investment in its research capacity. It is anticipated it will become the cornerstone of Scottish Enterprise’s new International Technology and Renewable Energy Zone – a global economic hub bringing innovative businesses into the heart of Glasgow.

The building is a nine-storey, steel framed wedge shaped structure occupying a sloping brownfield site. Conditions proved to be challenging at first, due to the topography and the water environment which included run off from excavations and some localised perched water. This lengthened the groundworks programme and also meant the steelwork erection had to be sequenced accordingly.

“Initially we had to concentrate on erecting steelwork on the western elevation where groundworks had been completed,” says Alistair Forsyth, Lend Lease Structural & Civils Package Manager. “Once this preliminary work had been completed however, we were then able to bring both sides of the structure together and erect steel in a more traditional floor-by-floor method.”

The steel erection programme is being carried out using a combination of two tower cranes, supplemented by a couple of 70t capacity mobile cranes. Mobile elevating work platforms (MEWPs) are also used by the erectors and, to give these machines a safe working surface, halfway up the building the sixth floor slab has been reinforced to accept extra loadings.

“Working off of this slab, MEWP operators will have the reach to erect most of the upper steelwork,” says Mr Forsyth. “However one part of the uppermost ninth level will require the MEWPs to be positioned on runners fitted to the seventh floor.”

Using three cores for stability, the steel frame is generally based around a 9.5m × 6m grid pattern in laboratory areas and a 12.7m × 6m grid in office areas. Cellular beams have been used throughout the floor plate in order to integrate all of the ducting in what will be a heavily serviced building.

The northern or top third of the wedge shaped building is nine levels high, but the structure slopes down towards the south and the pointed tip tops out at seven floors.

The north block of the TIC will house most of the facility’s laboratories on levels 4, 5, 6 and 7. The steel frame and precast slab in this area has been stiffened as far as is practically possible in order to achieve the very onerous vibration requirements specified for the laboratories. The slab is thicker at  300mm, compared to 150mm elsewhere within the building and additional secondary beams have been employed at 2m centres.

“Heavier steel sections and a thicker slab have been used in this area to make this part of the floor plate approximately six times stiffer than would be normally required for static loadings,” explains Angus Macdonald, Struer Project Engineer. “This additional mass and stiffness has been provided in order to support a reasonable standard of instrument performance. The current design will generally deliver a floor response factor of 1.0 at mid span locations and a response factor of 0.5 or better at column and core locations.” 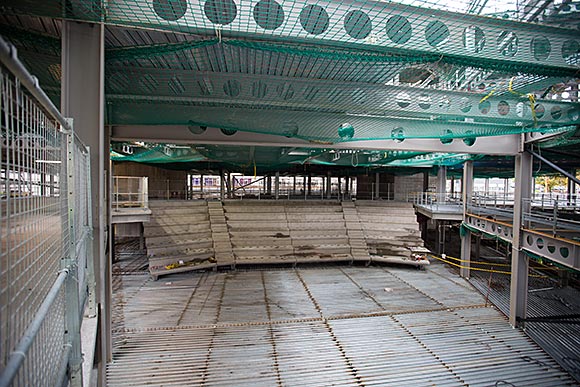 The central portion of the structure contains a 450-seat auditorium located at level two. Allowing the auditorium to be column free, a pair of 25m long double height trusses have been installed at levels 4 and 7. The two trusses were bolted together during the installation process to form one large five-storey element.

“We had to bring the main booms of the trusses to site in 20m and 5m lengths, which were temporarily supported by props during the erection process,” explains Robin Hamill, Fisher Engineering Project Manager. “Only when the adjoining floors were complete could we remove these props.”

The large truss is supported by fabricated plate columns, brought to site in 16m lengths weighing close to 6.5t.

A large open space above the auditorium’s roof will have a glazed roof to form a central atrium allowing natural daylight to penetrate the building’s interior.

Either side of the central void the side elevations of the structure will house the building’s offices. With a similar steel grid pattern to the laboratory zone of the building, many of the office spaces also feature clear spans in the order of 12.7m.

“Flexibility as well as the required long spans were two of the main reasons for choosing a steel frame solution for this project,” says Mr Macdonald. “The TIC’s requirements may change in time and so laboratories and offices may need to be enlarged or service risers may require to be reconfigured and this is much easier to do with a steel frame.”

Both of the elevations accommodating the offices culminate at the wedge’s tip that overhangs a double height open space in front of the TIC’s main entrance.
This same double height space then extends internally from the entrance all the way along the ground floor western elevation.

Summing up Mr MacDonald adds “Steel’s flexibility and adaptability has allowed us to make changes to the design at a very late stage. For example riser positions are still being finalised late into the programme and changing the design to suit these changes would not have been anywhere near as easy with a concrete frame.”

The TIC is due to be handed over to the client near the end of August 2014. 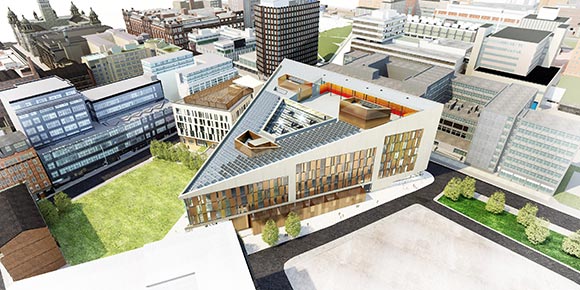 Visualisation of the completed TIC

What’s in the basement

Because of the sloping site the basement covers approximately half of the building’s footprint. Steelwork starts at this subterranean level and the frame also supports a retaining wall that surrounds the three elevations.

The basement will house some plant equipment (the majority is accommodated at rooftop level) a 150-seat auditorium and a series of secure laboratories.

The nature of the research to be undertaken in these laboratories requires them to have 400mm thick reinforced shielding walls and a moveable lead roof to ensure the environment remains sterile at critical times. An overhead gantry crane will be installed above the shielding walls in order to allow equipment to be installed and moved.