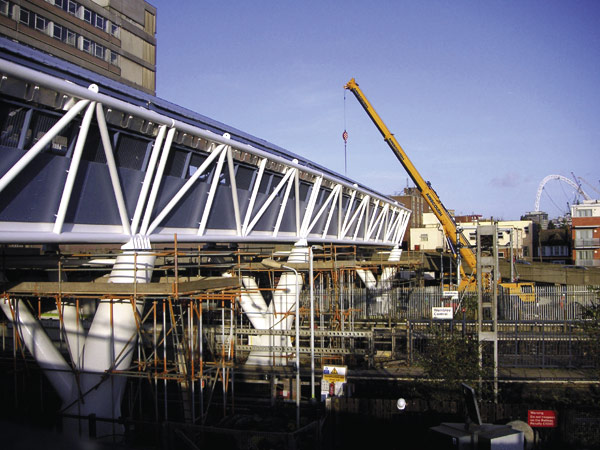 Rowecord Engineering has installed a 200t covered footbridge to serve the new Wembley Stadium. The structure forms part of a project for the London Development Agency to improve Wembley’s railway station and its facilities.

The bridge is over 50m long and in section is an unusual pentagonal shape. The aesthetic design was carefully considered to ensure it matched the design of the stadium, so was constructed using white steel tubular trusses and a clad pitch roof.

Rowecord used a 500t telescopic crane, in two three-hour rail possessions, to erect three bridge spans, each one over 23t. The bridge, which is covered on all sides due to safety over the railway, will be used for access to the stadium via Wembley High Street and the railway station.

Rowecord’s Contract Manager Wayne Powlesland said: “The Wembley footbridge is an attractive and practical solution where pre fabricated steel modules can be erected in a short period of time.”