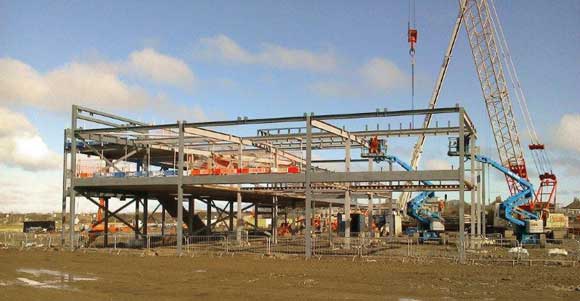 The steel frame erection programme gets under way

Due to open in the autumn of 2016, the campus will feature classrooms, staff rooms, offices, a sports hall, a library, swimming pool and a fitness suite alongside three outdoor sports pitches that complete the scheme.

hub North Scotland Chief Executive Angus Macfarlane says his organisation is committed to delivering a first class facility that will be an integral part of the Wick community for generations to come.

The project is divided into two structures, one solely for pupils and other a shared pupil and community space.

The main school structure’s design is based around a three-fingered teaching block (two for the secondary pupils and one for the primary school) all interconnected at one end by a 120m-long circulation ‘street’ block that also connects into a sports hall. 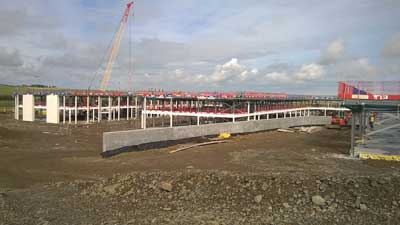 One of the teaching wings incorporates a retaining wall

Both of these large buildings have been built with structural steelwork, with the team citing a number of reasons for this design choice.

“The location and logistics played a key role in choosing steel for this project. All materials have to arrive via a long road journey and steel is easily transported,” says hub North Scotland Project Director Ian Leslie.

“In an area prone to strong winds it was also important to choose a material that is quick to erect as there is usually only a very short window of good weather.”

As well as suiting the location, a steel design offered further benefits to the overall scheme, which includes a couple of areas (the pool and sports hall) with long spans that are much easier to construct with steel.

A steel frame is also lighter than a concrete frame, which meant shallower foundations were needed, which in turn made the scheme more economic.

Construction work began in September 2014 on the previously greenfield site, which is close to Wick High School – one of the schools that will decamp into the new building.

“This gave us a hard surface on which to place our accommodation units, while at the same time we laid gravel around the site for access and pedestrian routes, all of which has helped us maintain a clean and dry site throughout the programme.”

Programming and design work dictated that steelwork contractor BHC began its steel erection programme with the teaching blocks. More design work was required with the more complex pool/library structure and Morrison Construction also wanted the pool to be dug out prior to the steel frame being erected.

Model showing the three teaching wings, the connecting street and the adjacent library and pool structures

Steelwork for the teaching blocks and the connecting ‘street’ is based around perimeter columns predominantly spaced at 8.1m centres. Bracing for the school teaching blocks is mostly located in stairwells and lift shafts, instead of the classroom partitions, which means these walls could easily be removed in the future to create larger spaces if necessary.

Although the majority of the ‘street’ is two-storey, accommodating staff rooms and offices on the upper level, there are some double height spaces for circulation routes and dining areas.

Both of the two-storey teaching finger blocks for the secondary pupils are 72m-long, while the primary block is slightly longer at 113m.

“The last 30m of this block is single-storey,” explains BuroHappold Engineer Kathleen Higgins. “There is a large outcrop of rock in this area so a retaining wall replaces the lower level of the structure which negated a lot of excavation work.”

As well as the sports hall, which has maximum spans of 19m, the other area of the project with this kind of steel usage is in the separate school/community block.

This structure, separated from the school by a distance of 5m, has a two-storey element housing the library on both floors, and a fitness suite situated on the upper level above a ground floor plant area.

Adjacent to this area, the steel braced structure accommodates a large 25m wide double height space for the swimming pool.

As with the sports hall, BHC installed deep spliced UB sections for these long span roof areas. This made the steel members transportable for their long journey from BHC’s central belt fabrication yard. 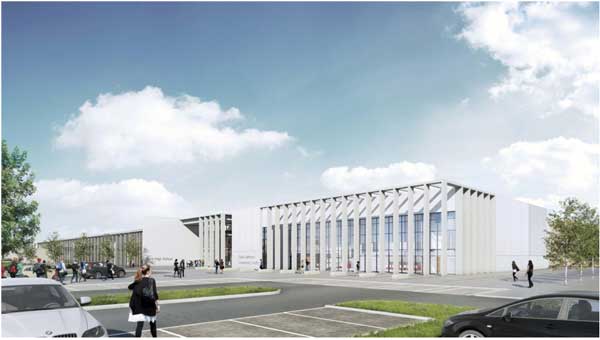 Recognising the best in public private partnerships (PPP), the Partnerships Awards are now in their 17th year and reward companies for working on new projects as well as on operational schemes.

hub North Scotland Chief Executive Angus Macfarlane said: “We are delighted to have received this recognition from the Partnerships Awards, which is a tremendous endorsement for the team responsible for delivering the Wick Community Campus for local residents. It is not only a reflection on the quality of the project, but also underlines the benefits and strength of the hub model – which has partnership at its core.”