Posted on January 3, 2017 by NSC in Projects and Features, This month's featured stories 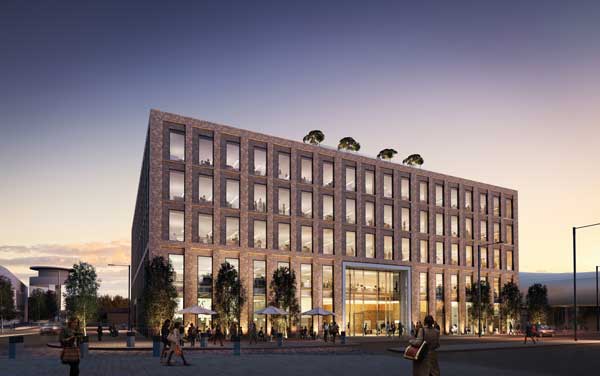 The building is located opposite the railway station

The steel-framed Porter Building is one of the most prominent schemes in the wide-ranging redevelopment of Slough town centre. Martin Cooper reports.

The most visible development to those arriving by train is the Porter Building, a five-storey office scheme under construction directly in front of the main entrance to Slough railway station.

Landid has significant expertise in delivering vibrant, new commercial-led regeneration projects and it wanted a design that would fulfil both the aesthetic and functional needs of today’s occupier.

“The design called for an aesthetic based on the idea a “modern warehouse conversion”. This is carried through to the detail of the scheme with expressed columns, beams and exposed soffits,” says tp bennett Director David Blair. 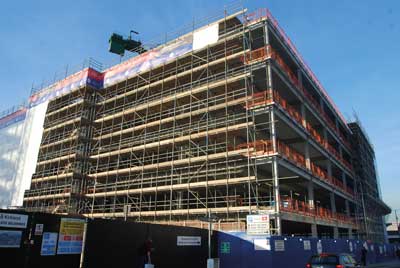 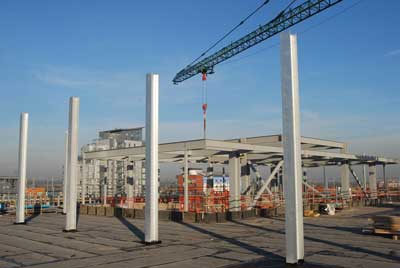 “Combining these with large floor-to-ceiling windows enabled the floorplates, which are up to 18m deep in places, to benefit from a sense of space and quality of daylight far beyond the norm for speculative office developments.”

The building has been designed as a steel-framed structure based around a regular grid pattern of 9m × 9m. The building features a double-height ground floor that accommodates a large column-free entrance lobby, a retail outlet and a business suite.

The entire southern half of the ground floor is occupied by a 100-space car park that incorporates a mezzanine deck to create a two-level facility.

Although the overall grid pattern is not entirely ideal for a car park, the offices dictated the design. For efficiency, the whole building is on the same grid as changing the car park to a more traditional 7.5m × 7.5m would have meant installing costly transfer structures on the underside of the first office floor.

Above ground floor there are four floors of offices constructed around a central atrium that will have a glazed roof. The building’s rooftop will contain plant areas and a roof terrace entertainment space.

“Steelwork supporting metal decking was the best solution for this scheme as it satisfied all of our client’s requirements,” says Cundall Structural Engineer Emma Kent.

“It provided the column spacings to create the large open modern offices and it is a light form of construction that only required pad foundations; an economical option compared to other piling solutions.”

As the project is a speculative build, flexibility was also a consideration and another reason for opting for a metal decking composite construction solution.

“In the future tenants may wish to add staircases to link floors or extra risers may need to be installed. Creating the necessary openings is much easier in metal decked flooring,” adds Ms Kent.

Work on this building began in January 2016, with main contractor Bowmer & Kirkland (B&K) inheriting a cleared site as demolition of the previous office block was already completed under a separate contract.

“It’s a very tight site with very little storage space for materials,” says B&K Project Manager Carl Woolley. “We are surrounded by roads on two sides and another construction project on the other sides [see box], while the proximity of the railway means our crane capabilities are reduced.” 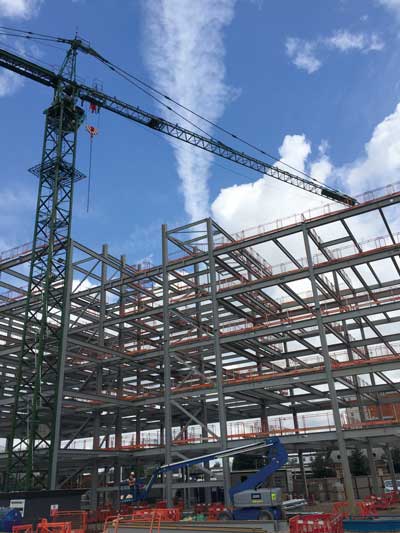 “Planning at an early stage was paramount due to access restrictions, the confined site location and the fact that the structure fills up the entire project footprint,” comments Leach Structural Steelwork Director Eric Leach.

Using the site’s tower crane and one mobile crane, working in conjunction with various sized MEWPs, all of the steel was erected by machinery positioned on the ground floor.

However, in order to give this machinery enough space to manoeuvre around the site, all of the pad foundations had manhole rings installed on to their tops and the space in between was then backfilled to create a level surface.

‘Without this work there would have been a serious lack of space as the protruding pads are all 4m in diameter and spaced at 9m centres,” says Mr Woolley.

Leach then erected the building in a phased sequence, completing the front elevation first and then working around the block in a clockwise manner. In this way entire elevations were freed up for follow-on trades, while Leach worked on the next phase.

As the building is designed around a regular column grid pattern that runs throughout the structure, including the car park, the only elevation that differs is the front.

To create a large clear entrance area one perimeter column has been omitted along with two internal members, and a series of 18m-long plate girder transfer beams have been installed.

To reduce the loadings and deflections imposed on the frame by the project’s panelised masonry cladding, all of the perimeter columns are 500mm × 300mm rectangular hollow sections, while elsewhere 533 UB sections have been used.

Summing up Mr Blair says: “The selection of the steel frame provided a number of benefits that enabled the project to meet demanding programme, cost and efficiency constraints.

“From an architectural perspective the use of a steel frame provided a unique opportunity. From the outset, it was an aspiration that the building design and branding articulate the rail heritage of the site.”

The Porter Building is expected to complete in August 2017. 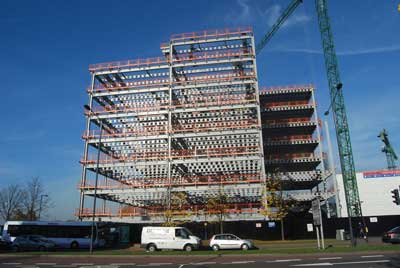 On an adjacent plot to the Porter Building, another commercial development in rising up as part of Slough town centre’s redevelopment.

Under a separate contract from the Porter Building, Bowmer & Kirkland has subcontracted Billington Structures to fabricate, supply and erect approximately 1,150t of steelwork for the 10-storey high Two Brunel Place.

Constructed around a steel braced core, the steel-framed structure begins at basement level and comprises internal spans of up to 16m.

For service integration and efficiency Billington has used cellular beams throughout the project, utilising both Westok produced members as well as its own fabricated beams.