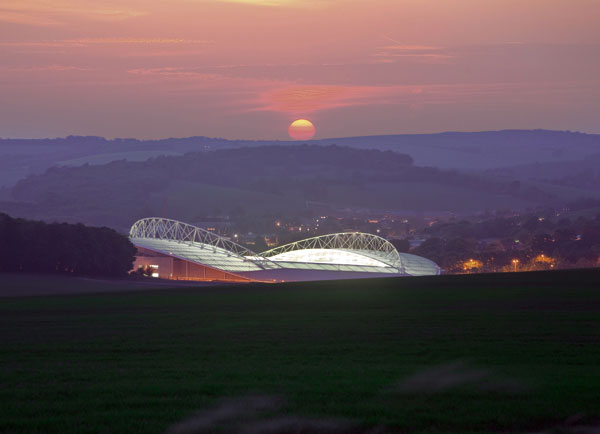 One of the longest running stadium sagas in English football has now ended with the completion of the American Express Community Stadium. Brighton & Hove Albion will kick off this coming season in a new 22,500 seater stadium after a torturous 14 years of ground-sharing and numerous public enquires which finally resulted in work beginning at the Falmer site.

Martin Perry, Chief Executive at Brighton & Hove Albion FC describes the construction of the new stadium as a dream finally being turned into reality. “We’ve fought long and hard for this project. There have been a few false starts along the way but now we can definitely plan ahead for life in our new stadium.”

Steelwork provides the signature element of the project, in particular the roof which is an undulating and sloping structure said to reflect the local land fall of the South Downs. Two large 170m long arched roof trusses span either side of the stadium, above the West and East Stands. The smaller North and South Stands have conventional cantilever roofs, but all four sides are interconnected. 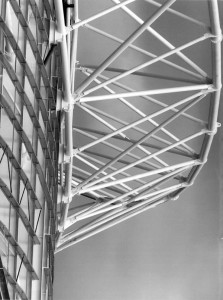 The roof trusses were delivered to site ‘piece small’ and then assembled into three liftable sections each weighing approximately 120t. These sections were then lifted onto a pair of 20m high temporary trestles located at ‘third-points’ on the concrete terracing.

Holding the truss in position at either end are two heavily reinforced ‘thrust walls’ which have been partially buried into the ground. Cast-in plates connected to steel bearings, weighing seven tonnes each and designed to resist a thrust of 20,000kN (2,000t) – connect to either end of the steel truss.

“Only when the entire roof structure was completed could it be de-jacked and the temporary trestles removed from below the west and east roofs, allowing the ‘thrust walls’ to take up the load,” adds Rob Hazell, SKM Project Manager. This process was carefully controlled with each iteration of the de-propping carefully monitored against predicted loads and movements.

Initially the weight of the roofs were transferred onto sets of jacks installed on four temporary trestles. The roofs were then lowered in approximate 20mm increments at each of the four trestles in turn. Extreme caution was required to ensure that the loads remained equally distributed between the trestles and that temporary forces being induced into the truss members above each trestle did not approach the safe capacity.

The judges say this is a well conceived and executed steelwork project, demonstrating close and effective cooperation in the team, bringing success for client and public.