Football club gets a home from home

When it opens this summer, Rotherham United’s new stadium will see the club return to its home town after a four year exile. Martin Cooper reports on the part structural steelwork has played in this soon to happen homecoming. 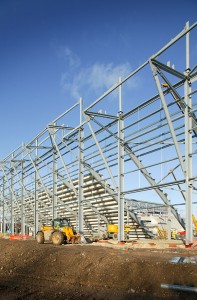 Main columns at the back of the north stand will be connected to, and support, roof masts.

The forthcoming 2012-13 football season will see Rotherham United FC (The Millers) once again playing its home matches in its own stadium in the South Yorkshire town. In July a new 12,500 seater capacity ground will be officially opened and Rotherham United’s homecoming, after four years of exile in Sheffield, will be complete.

Built on the site of the former Guest & Chrimes foundry, the new football stadium forms part of a larger regeneration project, taking place on either side of the River Don. This has already included the construction of the new Borough Council Civic Buildings (reported in NSC March 2011), which are situated adjacent to the stadium.

Building on a former industrial zone usually means the preliminary works include some sort of site remediation. This was the case on this site, but the biggest task was to raise the level of the entire site by two metres, a job which required the importation of 54,000m³ of inert material.

“The area suffered some serious flooding in 2007 when the River Don burst its banks,” explains Gary Oates, GMI Construction  Senior Project Manager. “In order to protect the site we had to build up the site and install gabian support walls along the project’s riverside boundary.”

With these important preliminary works and the installation of steel piles finished, Elland Steel Structures began its steelwork erection programme during week six of the project. 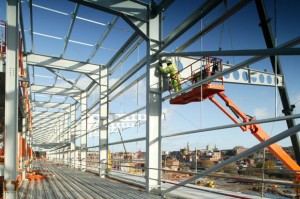 “We have a tight schedule to meet and the coming football season won’t wait for us,” says Mr Oates. “But by using steelwork for the project we are assured a quick construction programme.”

The stadium consists of four interlinked, but structurally separate stands, built with steel columns and rakers which support precast terrace units. Covering two of the stands (west and east) are cantilever roofs formed with cellular rafters, while the two end stands (north and south) have roofs supported and stabilised with 4m high masts and connecting backstays.

The 3,500 seat capacity west or main stand houses the majority of the stadium’s 3,000m2 commercial space as well as two floor levels of executive boxes and hospitality suites. For this stand, and all of the stadium’s structures, a grid pattern of 7.6m and 7.1m has been used for the steel frame.

“These are optimum grids for a stadium giving each seat enough width and also allowing for the minimum distance requirement between exits,” explains Alan Liddell, 3e Project Engineer.

Only two areas deviate from these grids and these are the west stand’s first floor function rooms and second floor executive boxes. Here larger open plan areas with 15m spans have been formed with the insertion of long cellular beams; basically the longer sections miss out one column line.

Steelwork’s flexibility has come to the fore as all eight of the executive boxes can be converted into one large room as they are divided by moveable partition walls. In all, this stand has five internal floor levels, all containing concessionary areas and toilets.

Forming the main stand’s cantilever roof are a series of 20m-long cellular beams, bolted to large 610 x 305 columns, situated towards the back of the terrace. These tapered rafters were brought to site by Elland Steel in two pieces, assembled on the pitch and then lifted into place as completed sections.

The rear portion of the west stand’s roof is clad, while the front 8m wide section will be covered with a translucent material, allowing natural daylight to reach all areas of the pitch and so helping the grass grow. The north and south stands both have the same 50:50 mix of cladding and translucency, while the east stand’s roof is completely covered in the see-through material. 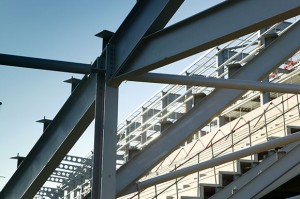 Steelwork has assured the client of a quick construction programme.

The other (north, south and east) stands are all slightly smaller than the west, each accommodating approximately 3,000 seats. In order to make the size discrepancy from the west stand to the north and south ends a feature element, these end roofs have five steps, each descending by 1.5m and so lowering the roof levels to meet the smaller east stand.

Two of the most visually striking features of the stadium, at least if viewed from above, are the 245mm diameter tubular masts and back stays which support the two end roofs. There are 14 masts per stand, one on each primary grid line and they are integral to the roof’s overall structural stability.

“The back stays are made from tubular steel up to 245mm diameter,” says Mr Liddell. “Connected to the rear columns, the stays act as the primary restraint to the cantilever roof system, providing support for gravity and wind uplift loads.”

As well as steel erection and metal decking installation, Elland Steel is also supplying and lifting into place the precast terrace units and stairs. At most times, the company had four mobile cranes on site, a 25t and a 50t capacity unit for the steelwork, and a 50t and a 100t capacity crane for the precast installation.

Steelwork erection followed a sequential programme with the majority of the west stand completed first, followed by the south stand going up while the main stand’s roof was completed. The north and east stands were then completed after the south stand structure was finished.

Precast installation followed on behind the steel erection and once each stand’s rakers were in place, the terrace units were lifted in. Elland Steel is scheduled to complete its work this month (February).

Rotherham United’s new stadium, meanwhile will be handed over on 9 July, in time for pre-season friendlies and the start of the new football season. 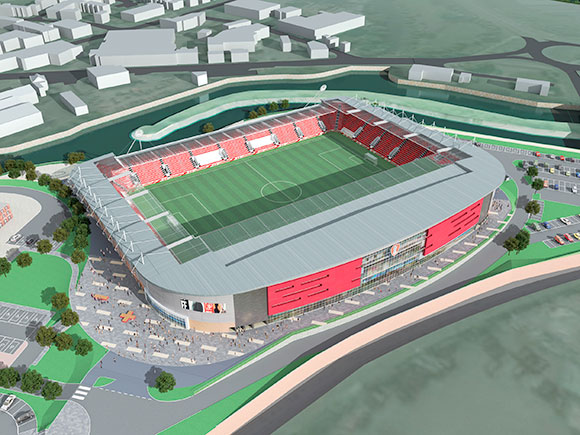 Impression of the completed stadium