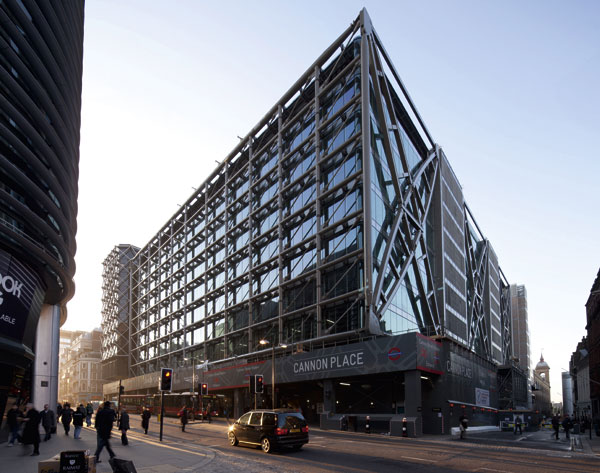 A highly innovative steel design was required for an eight-storey commercial project sitting atop a major London rail terminus and underground station.

As with most construction projects in the City of London, Cannon Place had to cope with a host of challenges such as limited space, busy surrounding streets and, uniquely in this case, a functioning railway station in the midst of the site.

Sitting above Cannon Street Station, one of the capital’s busiest rail terminuses, a new eight-storey office building has been constructed along with a new concourse and tube station entrance.

“The project’s location was one of the main challenges,” says Giles Fazan, Hines Construction Director. “We had to keep everything open to commuters and this was achieved by doing much of the work during nighttime and weekend possessions.”

Before work could start on the new structure an existing 15-storey office block situated above the station had to be demolished.

“We then had to programme the next stage to suit the best way of keeping the station functioning normally,” adds Andrew Veness, Laing O’Rourke Project Director. “A new deck was installed during nighttime shifts to avoid any passenger disruption, using a series of 21m long Fabsec cellular beams.”

This new station roof or deck has been described as resembling a giant table as it is supported by four large 17m long steel columns which were threaded through the station platforms. 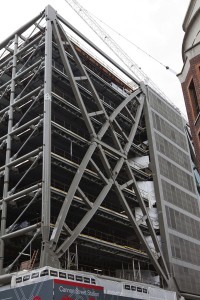 “We needed a lightweight solution and that’s why we chose steel for the framing material,” explains Mr Veness. “The cores are also steel because we needed a lighter solution as they are founded on old foundations and we had to limit the loads.”

The tabletop deck, which measures 67.5m along its north and south elevations, supports the majority of the steelwork for the new structure.

Watson Steel Structures’ steel erection programme, initially involved erecting the central area of the building (above the tabletop) up to the topmost eighth level. Once this was completed, two 21m wide x 67.5m long cantilevers were erected to the north and south elevations.

There were 12 hydraulically computer operated jacks positioned on each elevation and as the two cantilevers were progressively erected, the increased loads meant the jacks absorbed the extra loads and deflected them into the already completed parts of the structure.

The east and west elevations of the structure both feature three large cross bracings, known as X-frames, formed by two 16m long beams bolted together in the middle. Meanwhile, the front elevations of both of the cantilevers are formed by storey high trusses which help keep the spans rigid and pick up the loads from the secondary beams and transfer them to the X-frames.

In summary the judges say, the structural concept was heroic, the appearance is striking, and the site constraints were remarkable. A huge challenge, outstandingly well answered with steelwork.