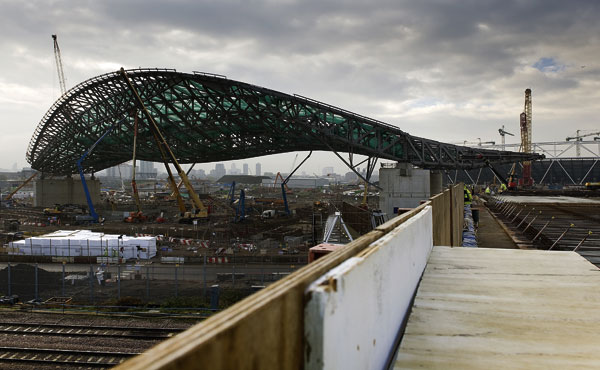 Comprising of a stunning waveform roof which sweeps upwards in a smooth curve, the Aquatics Centre will be one of the centrepieces of London’s Olympic Park.

This is a heroic engineering achievement which has overcome severe programme and constructional problems, say the judges. A necessarily complex structure delivers the form and shape at the heart of what will become the emblematic and beautiful icon of the London 2012 Olympics.The 11,000m² roof structure of the Aquatics Centre spans a column free area measuring 160m long and up to 90m wide. It is supported on bearings on two just concrete cores, 54m apart, near its northern end and on a concrete wall at its southern end.

More than 3,200t of structural steel is contained in the roof, of which 2,000t are fabricated plate girders.

Forming the roof are a series of long span trusses spanning lengthways over the main pool hall. They span between two transverse trusses, one mounted on the southern supporting wall and another spanning between the northern cores.

The main trusses lie in a fan arrangement to create the plan shape of the roof. The centre fan trusses cantilever northwards beyond the north transverse truss to form an overhanging canopy above the public entrance plaza.

“We wanted to simplify the roof as much as possible for construction,” says Mike King, Arup’s Project Engineer. “It’s a complex structure and the main structural challenge is the fact that it’s only supported at three points.”

To construct the roof while causing minimal impact on the overall programme the steel structure was built in situ, with the trusses made from fabricated H-sections. The initial steel section to be erected was a primary truss which sits on the south wall and supports the fan trusses that span the entire length of the roof.

“Early in the design process we did consider building the roof with timber,” adds Mr King. “However, it became apparent that the structure has too many high forces in its geometry, particularly where the fan trusses are thinnest.”

The individual truss members were fabricated in Rowecord’s South Wales factories and transported to site on 512 separate deliveries being controlled by Rowecord in conjunction with the Olympic Delivery Authority logistics centre.

The major benefit of the chosen erection sequence was that while the trusses were being erected the two northern cores were also being constructed. By the time the roof reached the north end the cores were complete. Also, by this time the southern or first line of support trestles were dismantled, once the roof got to the middle point. This allowed main contractor Balfour Beatty to get started with the job of excavating the pool facilities.