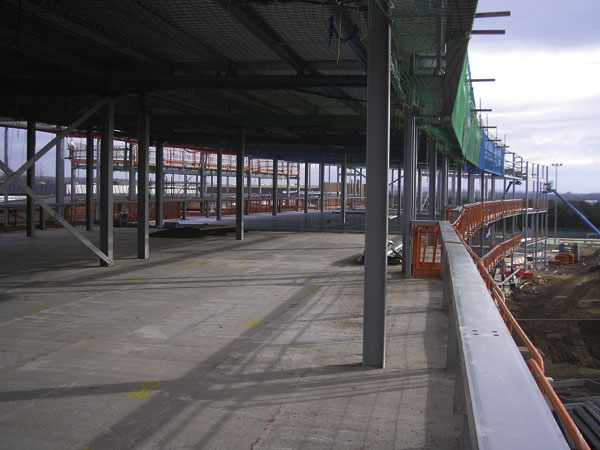 Steelwork has been completed for the new educational block at Washington’s Biddick School Sports College.

Barrett Steel erected approximately 300t of structural steelwork for the job, as well as edge protection, precast stairs, metal decking and the concrete to the suspended floors.

“The site was very confined as the new building is sandwiched between two existing blocks,” said John Brennan, Joint Managing Director for Barrett Steel. “Consequently Balfour wanted a subcontractor that could undertake as many of the sub-trades as possible in order to keep subcontractors on site to a minimum.”

To accommodate a sloping site the new building has a step in the ground floor slab. One end of the structure is two storeys high while the other end has three levels.

Prior to steelwork erection the ground floor slab was poured and readied by the groundworks team. This aided a speedy and easier steelwork programme said Mr Brennan. “We were working off a clean hard surface which allowed our team to finish ahead of schedule.”

Biddick School is due to open by Spring 2010.