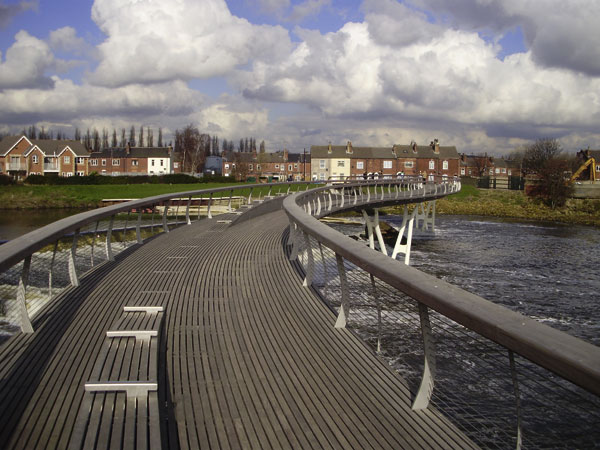 Spanning the River Aire, Castleford’s new footbridge unites the town and forms the first phase of a proposed riverscape masterplan.

Wakefield Council funded the £4.8M Castleford Footbridge along with Yorkshire Forward and English Partnerships with the view of creating a safe new pedestrian route between the town’s two riverside communities.

Wakefield Council appointed architects McDowell + Benedetti to design the bridge and as it had a fixed vision and the council had a fixed budget, the project was put out to tender as a designed bridge. Costain came on board as the main civils contractor and it in turn brought along engineer Tony Gee & Partners and Roewcord Engineering as structural steelwork contractor.

The erection process of the bridge was quite a challenge explains Graham Pugh, Rowecord’s Project Manager. “Access on both river banks for our cranes and for delivery of the bridge deck units was highly restricted. 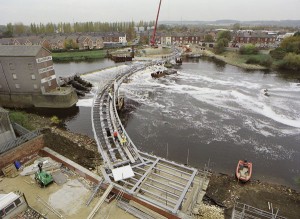 For maximum safety we wanted to limit the amount of work carried out over water, which meant delivering the deck sections to site in the biggest pieces possible, which in turn meant using some very big cranes to lift them into place.  Shoe-horning the cranes and lorries into place between people’s homes with inches to spare was, shall we say, interesting.”

The bridge is S-shaped in plan, 4m wide and stretches for 130m over three V-shaped piers. A twin steel box girder forms the spine of the structure and it varies in depth around the outer curve in order to counter the span differential.

Circular hollow sections, each topped by a tapering section that terminates in a solid steel machined fork-head, support the box girder deck.

The curved nature of the bridge presented a complex articulation to overcome as the support legs are inclined in two planes and the line of the deck varies over the connection. This challenge was overcome by utilising a complex arrangement of spherical bearings and bimetallic isolation.

The risk of bimetallic corrosion had to be considered in many connections. The bridge is a combination of S355 J2 steel and grade 1.4401 stainless steel, the latter being used for the majority of the architectural features. Isolation was achieved in most locations with nylon pads and top hat washers.

However, the pin arrangement required a harder wearing compound to carry the 100t design load and isolate the Duplex stainless steel pin from the mild steel machined head. This was achieved by inserting a fibre-wound bushing into the connection.

The bridge’s main beam was originally a multicell box girder spanning between piers. However, one cell gradually increased in depth and rose out of the decking to form seats between the piers. This provided the extra depth at mid-span to satisfy the maximum bending moment in the structure.

“We needed the extra depth for the longer spans,” says Architect Renato Benedetti. “The idea was to create public space in the middle of the river to which the benches were integral. We liked the synergy of needing the depth and turning it into a place to sit.”

The judges say the bridge is a triumphal demonstration of infrastructure improving the quality of life.