The Infinity Footbridge is a unique linkage for pedestrians and cyclists across the River Tees and forms an integral element for the area’s regeneration. The structure is formed of two graceful steel arches that flow into one another, spanning 60m from the south bank to the central pier and a further 120m to the north bank of the river.

The arches are fabricated to form trapezoidal hollow box sections which vary from 1,500mm to 400mm deep and 2,500mm to 200mm wide. The arches’ box sections bifurcate on plan over the central pier and are supported by four steel arms. The arms in turn land on two 3t solid machined pieces of high grade steel, forming the central nodes. 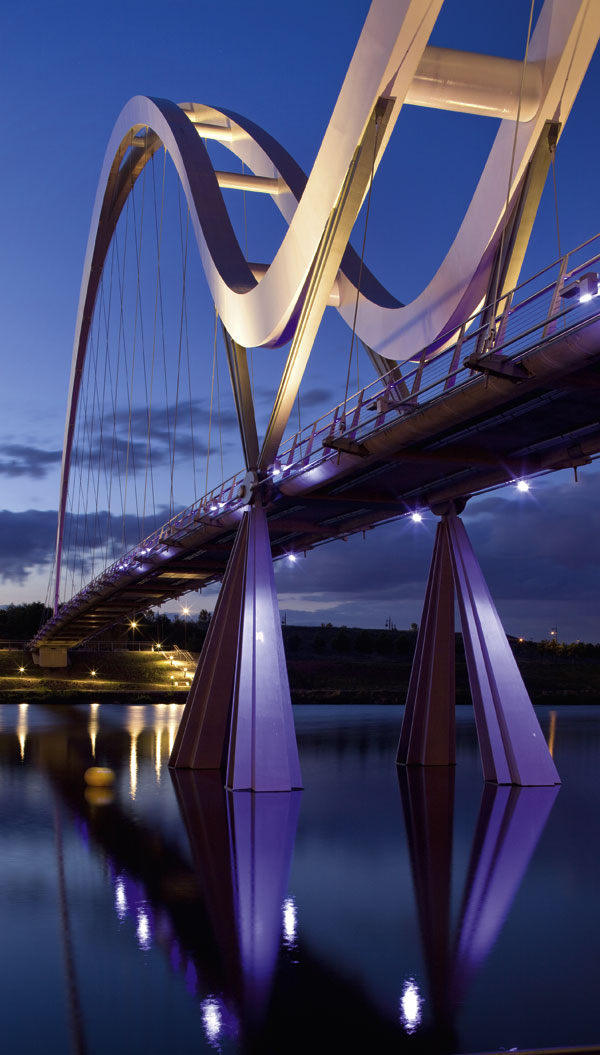 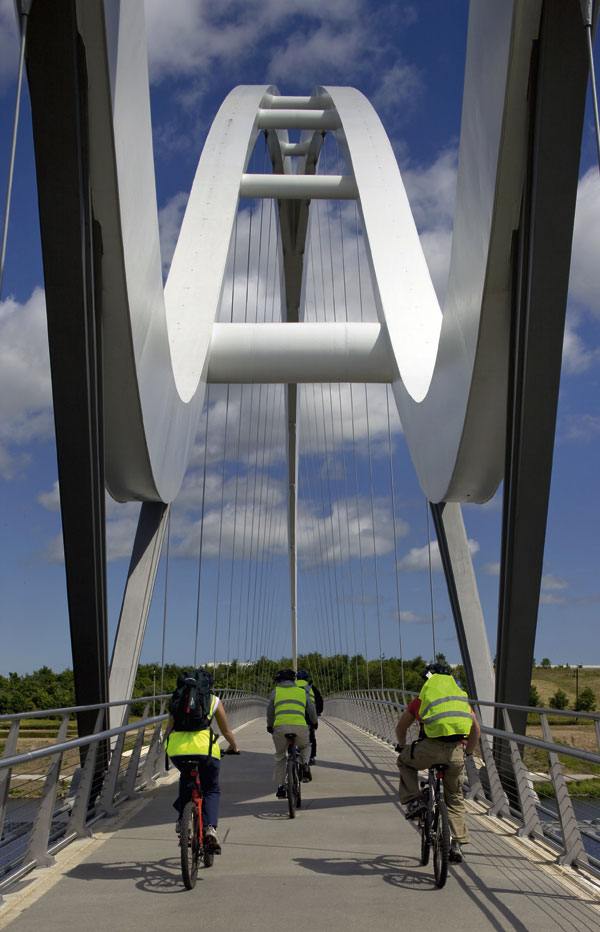 At its highest point the bridge stands 40m above the river and the structure was constructed from more than 300t of weathering steel.

The deck is made from precast concrete units suspended from the arch by hangar cables and post-tensioned along their length by a pair of longitudinal cables running either side of the deck. These cables also act as ties for the arch which resolve the horizontal thrust within the structure. The deck is finished with a stainless steel handrail which incorporates the bridge’s dynamic lighting system.

Working with 3D digital models was central to the design of the bridge. The shape of the arches was perfected using form-finding 3D analysis techniques, while the structural analysis model was linked through to the geometrical model, allowing simultaneous updates to both structural and visual models.

As the project moved into the construction phase several contractual barriers were overcome to allow construction information to be delivered in a single digital 3D model. This was used directly by the steelwork fabricator; the erection sequence designer; casting manufacturer; and for the fabricator of the steel moulds used for casting the deck units.

Through close collaboration between designer, contractor and fabricator, the design of the bridge was developed in order to both ease the fabrication and construction, while maintaining the original aesthetic quality.

Lifting the larger steel arch provided a special challenge. Sections of the arch were fabricated in Darlington by Cleveland Bridge and then carefully welded together on the river bank. In a single lift using the UK’s largest mobile crane, the large north arch was lifted into place causing minimal disruption for river users.

In summary, the judges say this is an inspirational project which fulfils the client’s brief for a landmark. The elegant structure clearly describes the forces on it, and its simplicity belies the technical complexities which were handled by good teamwork. This is steelwork at its most dramatic.