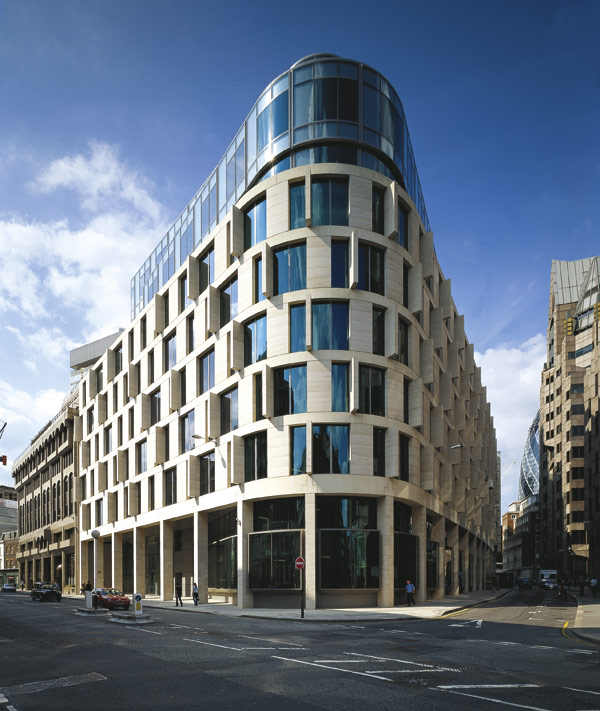 Plantation Place South is a major new high quality office development on a prime site at the heart of the City of London, the second of two adjoining buildings. The design for the 160,000 sq ft building includes the innovative use of load bearing stone for the envelope.

An outstanding feature of the design is the use of finite element analysis based software to produce a rigorous analysis of what would happen to the structure in the event of a real- world fire. Conservative assumptions were made in the analysis, such as that the sprinkler system is not working, which calculated where extra fire protection could usefully be applied, and where none is in fact needed.

Architect Arup Associates chose a steel frame as a safe and reliable method for the main framework, using a concrete slipform core. Comparisons were made with concrete alternatives but the small number of bays and consequent lack of repetition meant concrete multi bay construction was rejected 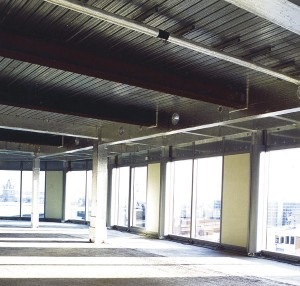 Concrete would also have created foundation loads 20% higher than for steel. The congested nature of the site also meant there would be little room for storing formwork for concreting; steel offered off site fabrication and just in time delivery. Overall, for the same floor depth steel offered a 6% saving in frame costs, 10% on foundations and 5% on programme time.

The ambition at Plantation Place South was not to save money on fire protection, stresses Dr Barbara Lane of Arup Fire:’We wanted to demonstrate that a building as complex as this one could be safely and robustly designed using the latest structural fire engineering techniques.’

Dr Lane explained that traditional fire engineering is based substantially on looking up a table and making sure a design complied with it. The traditional fire engineering approach assumes that all fires are the same, and that a fire in an office is comparable to one at an airport, for example. Dr Lane also argues that building regulations are derived from old buildings and ignore the fact that whereas an unrestrained beam will deflect at 450 degrees Celsius, a restrained beam will not deflect substantially until 800 degrees is reached. A frame also has a different response to fire than the traditional furnace tests suggest. Dr Lane and her colleagues drew on the known behaviour of steel in fires from a major fire at Broadgate and large scale fire tests carried out at Cardington. .

‘She explained: We calculated what happens in a real fire, using real temperatures. We then calculated the heat transfer through all the structural materials and then we were able to calculate the mechanical response of the whole frame. We then know where fire protection is needed, and also where it is not required.’

At Plantation Place South most secondary beams have been left unprotected as a result of the analysis. Core connections were also modified to accommodate thermal effects. Because of the increased emphasis on structural design Arup was able to demonstrate that the stability and compartmentation requirement would be met with the reduced level of fire proofing. Armed with this in depth understanding of structural behaviour in fires, Arup was able to satisfy all other interested parties that the solution was robust, including the client, the building control authority which was the Corporation of London, and insurers.