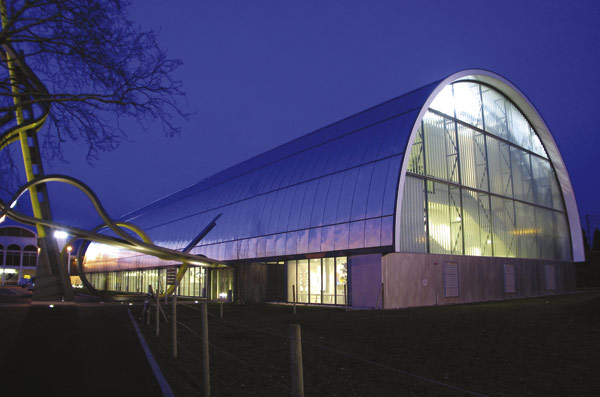 The architectural brief for a new structure to house the Milestones of Flight collection at the Royal Airforce Museum at Hendon in North London was to create a dramatic space to display some of the most important aircraft in the history of aviation – from the first gliders to the fighter planes of today.

The £7.2M new facility, conceived in 1999 to celebrate the 2003 centenary anniversary of powered flight – is supported by a £5.15M Heritage Lottery Fund award.

The requirement was not only to design a strong and substantial structure to display full size aircraft but also for a space in which environmental conditions, such as temperature, humidity and pollution levels are regulated to ensure the long-term preservation of the exhibits, some of which are extremely delicate.

Architect Feilden Clegg Bradley says the aim throughout was “to integrate sound principles of engineering while providing a practical and cost-effective design”. It also set out to produce a design that had the feel of an aircraft hanger yet retained “a warm and welcoming environment” that would not alienate or isolate the visitor. 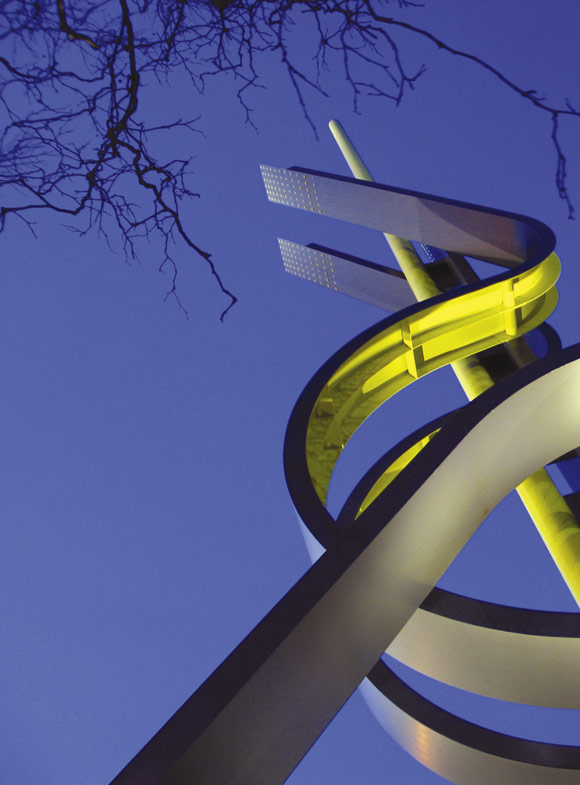 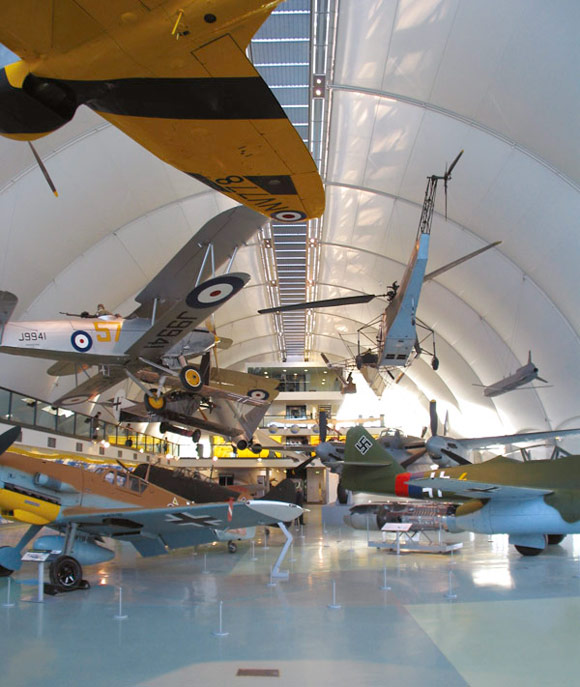 Engineering consultant Buro Happold’s resulting structure is made up of 13 arched steel trusses, spanning between reinforced concrete piers to create a 78m by 26m building plan. Each arch spans 26m and rises to 12m giving an almost semicircular profile.

This simple barrel vault is clad externally in stainless steel, evoking the sleek fuselages of modern aircraft, with a central roof light at the apex. Daylight falls on an internal lining made up of semi-translucent fabric panels. These not only conjure up the feel of early aircraft, but also act as an environmental filter preventing harmful ultraviolet light form damaging the exhibits.

The high degree of curvature in the roof arch minimises the loss of useful space along the edges of the building and minimises the horizontal thrust generated by the arches.

The judges praised the building as a “crisp solution to provide flexible space, which allows the suspension of aircraft in many different combinations.” The judges added that incorporation of the fabric liner “enhances the effectiveness of the space”.

The use of lightweight tubular steelwork, supplied by fabricator SH Structures, led to the design of an efficient two-pinned arch system – as opposed to a more common three-pin arrangement. This meant each arch could be assembled at ground level and erected in one lift – which allowed the 120t of structural steel to be erected in a month.

Structural steel also features prominently in a 35m-high sculpture by Japanese architect-turned-artist Kisa Kakakami which marks the museum’s entrance. Praised by the judges for the skilful fabrication needed in its erection, the “Sky Dance canopy” is made up of 20t of steel plate ribbon welded to a central cantilever post.

This is designed to be significantly stiffer than the ribbons, so that it attracts the majority of wind load and allows individual ribbons to be relatively lightweight.

There are five ribbons, each nearly a metre wide, made of 12mm thick plate with three web stiffeners forming a lightweight, but strong, open “E” shape.

SH Structures cut each stiffener to the specific curve of the ribbon, providing a profile onto which to weld the curved backing plate. The joints between sections were then site welded and ground flush to achieve a smooth finish.

Simon Greenish, the RAF’s Museum Development Manger, praised the project team’s “very client focussed approach”, which produced a “high value for money building”. This has proven phenomenally popular with the public – since the new structure opened visitor numbers to Hendon have increased by 50%.