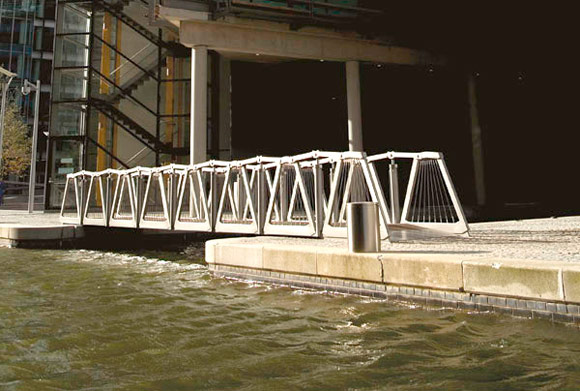 “A wonderful, joyful addition to the development around Paddington Basin” said the judges. Nonetheless, the unique bridge is rooted in function, its creator says.

Paddington’s Rolling Bridge was Thomas Heatherwick Studio’s highly original solution to the need to maintain continuity of the canal towpath and access to the canal basin for boats. Its eight segments roll up into a complete circle under hydraulic control, a process taking three minutes.

Thomas Heatherwick says: “As a project the bridge is close to the heart of the direction we’re interested in pursuing in the studio, in that it’s something that has a serious job to do.”

The idea went through numerous stages of evolution before reaching its final form. “Originally we were quite keen to have a mechanical bridge that rolls up by hand,” says Alan Jones, Project Director for structural engineer SKM anthony hunts. This would reflect canal heritage, where locks are usually hand-operated. “We were quite confident it could have been done, using serious gears and counterweights.” 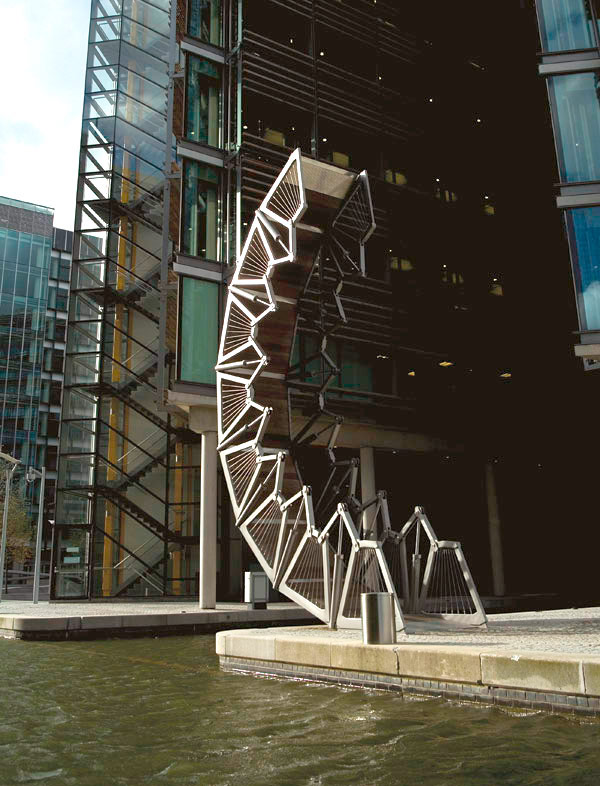 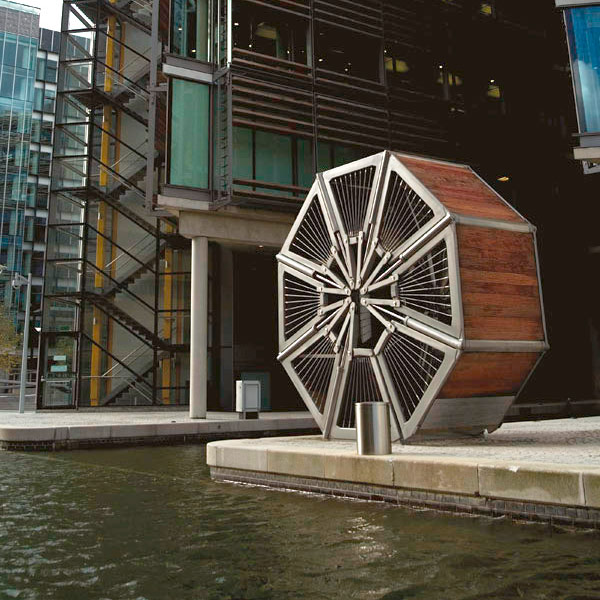 Then Mr Heatherwick decided that, for aesthetic reasons, the bridge needed to form a closed circle. This meant it had to curl up past its centre of gravity so that hydraulic power would be needed to open and close it.

“The other big change was in the way the bridge folds up and the arc it describes,” says Mr Jones. “In the original version, folding up one segment at a time, the mechanical action was not very smooth.” Instead, after much work, the solution was arrived at in which the whole bridge folds up as a unit in “a gorgeous curve”. He adds: “It’s less efficient because we’re lifting the whole bridge at once, but that changed it from engineering into a work of art.”

Bringing the idea into reality presented challenges for all concerned. From the structural design point of view, in the unrolled configuration the handrails act as the top boom of a simple truss. The handrails are pulled below the horizontal to lock the bridge in position. Fully open and fully closed, the bridge is stable without reliance on the hydraulics.

As the bridge starts to open it changes from a simply-supported truss to a cantilever, with a stress reversal between top and bottom booms. During the lift the hydraulic rams become an integral structural component. A number of segments experience another load reversal as the bridge rolls over centre.

The bridge was modelled at 30° intervals using the Microstation CAD programme and Robot analysis software.

The hydraulic design, by DJW Consulting, achieves the precise control needed over the motion of the bridge without sophisticated electronics, to achieve reliability while avoiding the need for an expensive maintenance schedule. The equipment is mounted in the basement of an adjacent building, so the bridge operates silently.

The structural frame is fabricated in grade S355 rectangular hollow section, with a hardwood timber deck. Fabrication, by Littlehampton Welding, required tolerances more usually associated with mechanical engineering. When closed the clearance between the handrail sections is less than 10mm. The first and last segments must come to rest with a parallel spacing of 20mm between the frame components to achieve the required rolled form. The bearings and stainless steel pins for each bridge segment are fitted to a tolerance of +0/-0.016mm.

Mr Heatherwick says of his work: “It’s always the function I’m interested in first. But if you can make things special they are more likely to survive intact in the long term. If someone considers it art, that’s a compliment.”