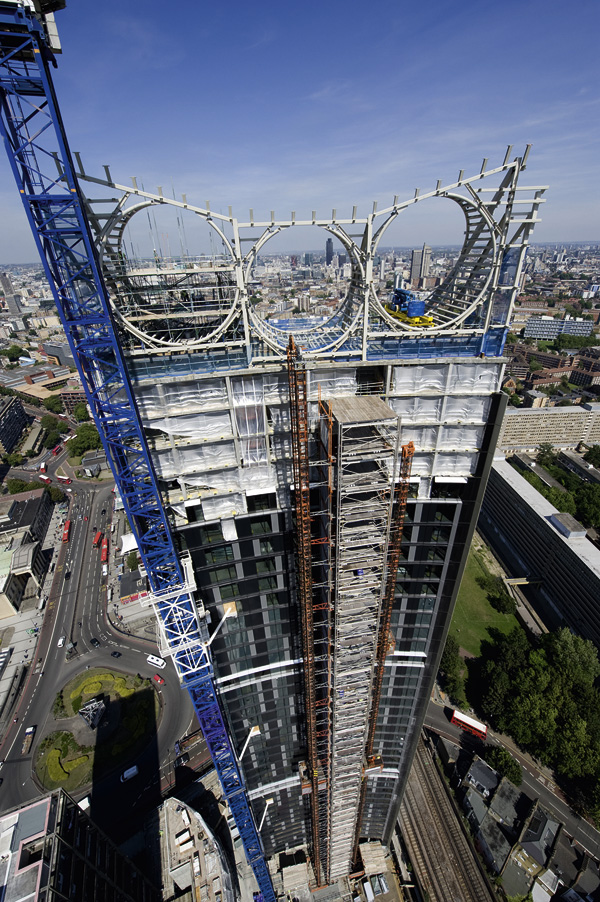 Steelwork for the uppermost sections of Brookfield’s 43-storey Strata SE1 tower in London’s Elephant & Castle has been completed.

The privately funded project will be the capital’s tallest private residential building and consists of 408 apartments, with the first 10 floors given over entirely to shared equity housing.

Topping the building will be three wind turbines, each with a maximum output of 15kW, designed to power the structure’s common areas. The turbines will be housed within the steel structure which gives the building a distinctive angled roof.

The roof structure is 17m high and the front is formed by four elliptical shaped CHS sections, while the rear has six circular openings.

Gyan Aryaratna, Bourne Steel Contracts Manager, said: “The curved members are joined with 66 beams which form the surface for the cladding. To accept this cladding, there are hundreds of brackets welded to the steel structure all of which are unique because of the shape.”

Working on behalf of main contractor Brookfield Construction, Bourne completed its steelwork programme in three and a half weeks. “Erecting 150m above the ground was a challenge as all steelwork had to be lifted up piece-small,” said Mr Aryaratna. “The largest steel element lifted to the roof was a 7.5t beam which forms a rooftop canopy over a window cleaning crane.”

To make sure the steel programme went to plan, Bourne trial erected the entire roof structure before dismantling it and transporting it to site in erectable pieces.