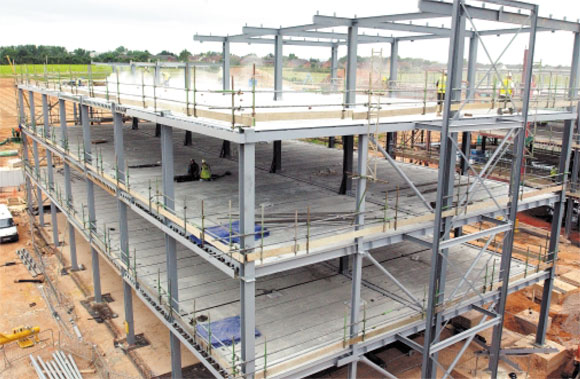 New offices are being built in Exeter for the Met Office. It is a major development, accommodating a large staff and a huge computer system in an environmentally sensitive layout. It consists of several buildings grouped around a “street”. Philip Wiscombe reports.

The Met Office headquarters in Bracknell will move to new offices in Exeter late in 2003 in a PPP project with Stratus (a Group 4 Falck/Costain-Skanska Joint Venture consortium) valued at £150m, including construction costs and the operation of support services for a fifteen-year period. The new building will be modern and environmentally friendly, bringing all the existing offices currently in Bracknell, under one roof. This will improve the effectiveness of operations, reduce running costs, and encourage the development of innovative products and services.

The external envelope reflects the science and function of the Met Office by connecting the internal and external environments in a stimulating way combining solid, transparent and fluid elements. As well as almost 13,000m² of office space, facilities at the £80million, three-storey, 31,400m² site, will include:

A major design criterion for the building is the achievement of BREEAM excellence (Building Research Establishment Environmental Assessment Method). Many of the materials being used are from sustainable sources and there is minimum use of non-renewable energy to service the heating, hot water, cooling, lighting, power, and ventilation. The recycling of energy and materials e.g. wastewater and rainwater and use of CHP (Combined Heat and Power) plant are a feature and the landscaping is designed to encourage flora and fauna.

The structure includes seven three-storey, and three single-storey, buildings, The new complex, linking workshops, support services, the heating and cooling plant, and emergency generators, and is due for completion towards the end of 2003.

The consortium was awarded the project after a rigorous, eleven month competition involving proposals from nine teams. The scheme was chosen despite stiff competition because it best met the wide-ranging criteria that were important to the Met Office.

In the design, the architects, Broadway Malyan, were trying to reinforce the culture of flexible working and interactive connection, which is essential in today’s business environment. 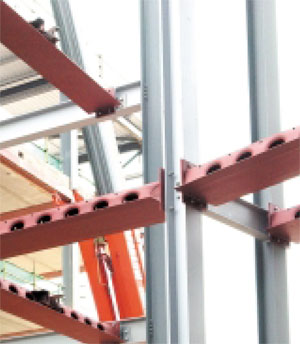 Deltabeams on link between blocks B & C

The design aims to produce an active and exciting working environment, where the internal layout allows guests and visitors to be an unobtrusive part of the dynamic heart of the Met Office.

The whole construction delivers a shallow, thermally efficient steel frame solution. The Thermodeck heating and cooling system that passes cold or warm air through the hollow cores of the pre-cast plank cores, requires an exposed soffit to work efficiently, the combined solution with Deltabeams make this possible. Deltabeam is a new composite beam system from BRC Special Products Warrington.

Beam-to-column connections are designed using the rules for Wind-Moment connections in the BCSA/SCI Joints in Steel Construction series. Deltabeam is a cellular welded box section with integral support ledges and punched webs which act compositely within the floor zone, as a support beam to flat slab construction.

The Deltabeams give the added advantage of a flat soffit without the need for fireproofing. This reduces floor depth, decreases the overall building height and simplifies under-floor services. The intermediate floor construction has computer decking directly onto the precast floor units. The Deltabeams make it possible to pass reinforcement through the beams, tying in the floor planks without the need for a topping.

Bourne Steel is responsible for the supply and erection of the structural steelwork. It is working on a sub-contract worth in excess of £4m which includes the supply and installation of 2,000 tonnes of steelwork and 22,000m² of pre-cast concrete floor planks and 1,000m² of metal decking. 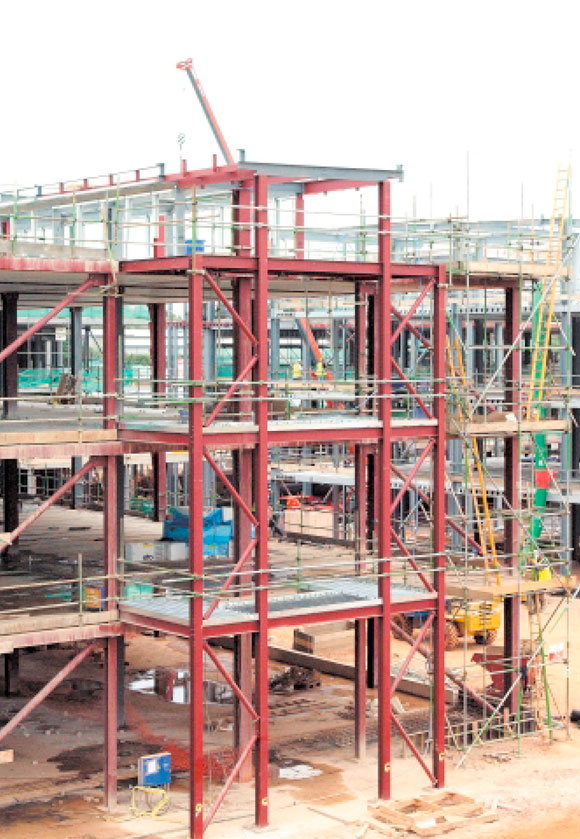 Block B under construction

Extensive use has been made of Wind Moment sway frames comprising UC columns and Deltabeams that support 8.825m span pre-cast floor units.

The fabric of the building will be used as a heat store or a means of cooling. During cooler summer nights, the hollow concrete floors are cooled by air drawn in from outside. The air inside the building is cooled during the day, by passing it through the slabs. In the winter, the well-insulated building retains its heat – a function enhanced by the heavy floor slabs.

The project will include two ‘supercomputer’ halls, an energy centre, an IT workshop, visitors/conference centre and a library. The buildings account for £79m and will house 1,150 people and the powerful new computer systems. Alan Douglas, Relocation Director for the Met Office, said: “The planned upgrade of the supercomputer (in 2004) will allow us to use higher-resolution models with improved computational and physical processing, enabling us to get more accurate forecasts of both near, current weather and longer-term climate trends. We would not have been able to consider such an upgrade without the new facilities.”

Each computer hall covers an area of 864m² and, in combination, will house one of Europe’s largest IT installations, including two supercomputers, hundreds of servers and the Met Office mass storage system, which is expected to hold a petabyte (one million gigabytes) of data.

By March 2004, a new supercomputer made up of 30 NEC SX-6 nodes will be running at the new site. This will deliver approximately six times the combined power of the Met Office’s two current Cray T3E computers. Weather forecasts will benefit from the extra power, which will mean increased accuracy and detail in the models run by the supercomputer. These models will, in turn, provide improved climate change predictions and forecasts of highimpact weather, building on data available from a new generation of satellites.

Philip Wiscombe is a Director of Bourne Steel Ltd.