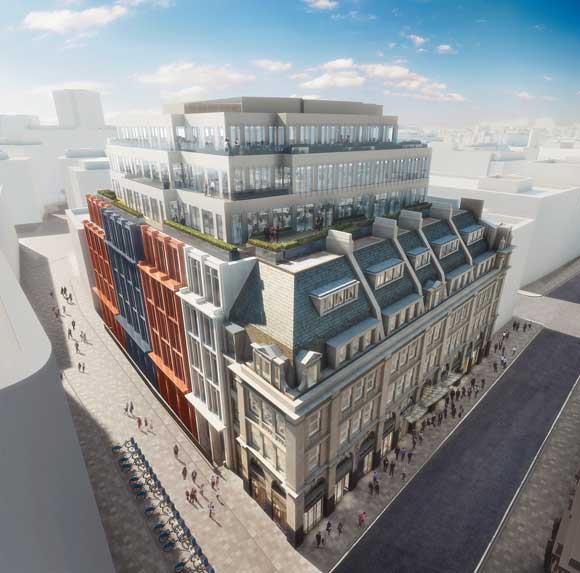 A modern steel-framed office and retail scheme in the City of London is being constructed behind two retained façades.

The four-storey façades of the previous building – Lonsdale Chambers – have been retained along the entire Chancery Lane elevation and a portion along the Breams Buildings thoroughfare.

Originally built in the 1870s, keeping these masonry walls and windows will add continuity to the surrounding streetscape.

“Retaining the façades was one of the planning stipulations,” explains Scott Brownrigg Assocaite Ian Wood. “They help make our new building less obtrusive, while also maintaining the look of the street.” 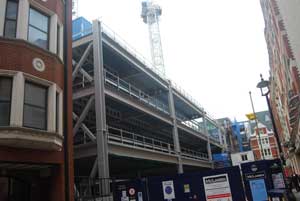 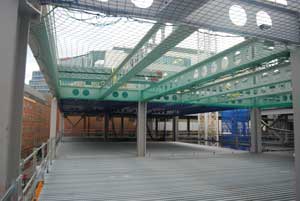 Long span cellular beams have been used throughout

“Above the façades the new steel-framed floors are set-back which reduces the impact from street level along Chancery Lane.”

Overall the new development comprises a basement, ground floor and seven upper storeys housed in a long span, steel-framed building with concrete floor slabs cast on metal decking. In order to maximise the floor-to-ceiling heights, the services have been incorporated into the structural steelwork zone by using Fabsec cellular beams throughout the frame.

The building’s steel-framed core is offset and disconnected from the building floor plate due to vertical service risers. The building’s stability is consequently provided by the structure acting as a sway frame to remove the need to install cross bracing and compromise the architectural scheme.

A centrally positioned atrium extends upwards from basement to roof level, where it will be topped with glazing that will allow natural light to penetrate the inner areas of the building.

The basement of the building will accommodate some retail space towards the Chancery Lane end, with plant areas located to the rear in a deeper part of the floor zone. The ground floor will house more retail space, the main office entrance lobby and storage areas for the office tenants, such as bike sheds.

From the first floor upwards the new building will consist entirely of office space, with the first three levels (first, second and third) eventually tied into the retained facades [see box].

The fourth floor will feature a new mansard design (again mimicking the surrounding buildings) while above this the building steps back to accommodate a large fifth floor roof terrace and smaller terraces above. Because of these outdoor areas, the topmost office floors (5, 6 and 7) have significantly smaller floorplates than the lower floors.

McLaren Construction began work on this project in August 2014 with the demolition of Lonsdale Chambers.

Early works included the demolition and stripping out of the original structure and installing associated temporary works to support the existing façades, basement retaining walls, pavement vaults and party walls of the adjacent properties.

Once the piling of the site, which required approximately 600 piles installed up to a depth of 22m, was completed the steelwork programme was able to begin.

Steelwork for the new frame begins at basement level and most of the 2,000t of steelwork Severfield has erected for this project was lifted into place using the site’s two tower cranes.

“The only exceptions were a couple of 20t beams installed at ground and first floor levels which were too heavy for the tower cranes,” says McLaren Construction Project Manager Gavin Turnbull.

“As there is no room for a mobile crane we had to split one beam into three sections so the tower crane could lift the pieces, while the ground floor beam was installed using a forklift and a block and tackle.”

These heavy beams form cantilevers; at ground floor where the frame has to avoid a subterranean obstruction and at first floor where a longer span is needed to accommodate the entrance.

Getting steel or any construction material to a site in central London is always a logistical challenge. On this project there is no space to store any material as the footprint of the site is taken up completely by the new building.

Steel was delivered on a just-in-time basis with at least two deliveries every working day.

“We had two offloading areas for the steel deliveries, one on Chancery Lane and the other within the site boundary adjacent to Breams Buildings, with each area serviced by one of the two tower cranes,” explains Severfield Project Manager Richard Grey.

“For the erection we split the frame in half, with each of the two areas supplied by one of the offloading areas and with its own dedicated erection gang.”

The steel frame is based around a fairly regular grid pattern offering column-free spans of up to 12m, all the way around the central atrium.

Aside from the first three levels of steelwork, the frame was erected two floors at a time, with Severfield also responsible for installing the metal decking which followed on behind.

Putting the finishing touches to the building, the cladding systems include fully glazed façades above the retained elements, while the remaining façade on Breams Building (excluding the retained portion) features curtain walling incorporating glazing and terracotta elements of blue, orange and white.

External works to the site include repaving footpaths to Breams Building and Little Whites Alley and high level soft and hard landscaping to the roof terraces from the fifth storey upwards. 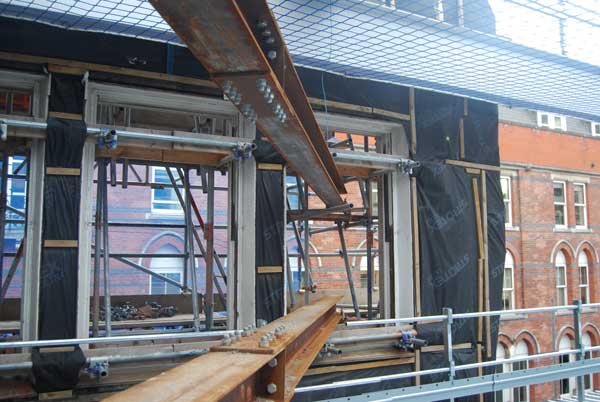 The steelwork erection was one of the key elements in keeping the project on schedule as a number of other vital trades and programmes were dependent on the steel completing on time.

The retained façades are supported by temporary propping systems around which the new steel frame was erected (pictured above). Once the floor slabs up to level four were cast and cured the façades were then tied into the new steel frame via a series of angles.

After this the propping was removed as the façades were then supported by the steelwork.

Further down the building each corner of the site was temporarily propped, while the groundworks and then steelwork programme was progressing. Only after the ground floor slab was cast could the basement temporary works be removed.