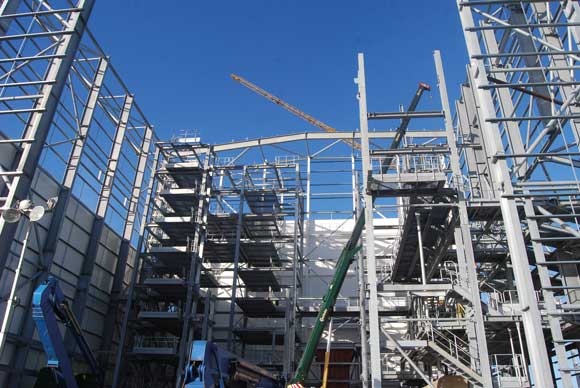 Once operational in 2017, the plant will have an electrical capacity of 44.2MW, fuelled annually by 250,000 tonnes of baled straw supplied by local farmers, as well as woodchips.

The plant is owned by a joint venture of Burmeister & Wain Scandinavian Contractor (BWSC) and a Danish infrastructure fund managed by Copenhagen Infrastructure Partners who together are investing around £160M in the project.

The biomass plant’s operation is based on energy technology developed in Denmark. The main part of the power plant is a boiler from Burmeister & Wain Energy (BWE), which is said to be the world’s largest water-cooled vibrating grate straw-fired boiler.

BWSC has in the last three years completed a similar project in Sleaford, Lincolnshire [see NSC Sept/Oct 2013], and it is currently constructing another biomass plant in the same county at Brigg [see NSC June 2015]. 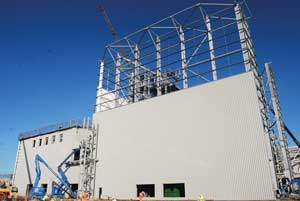 The turbine hall during the cladding process 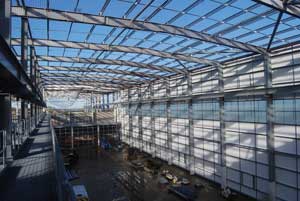 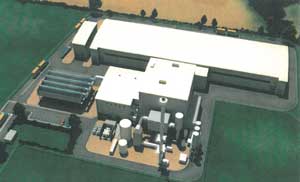 Visulalisation of the completed project

Construction work on the Snetterton project got under way in February 2015, with BWSC clearing the greenfield site, stabilising the ground and installing slab foundations.

A few months later Caunton Engineering was able to commence its steelwork erection programme, which includes constructing a boiler house, turbine hall with an attached office block, two straw barns, the roof of the woodchip barn and associated conveyor and chute supports, along with crane beams, stairs and platforms.

“Most of the access roads and slab foundations had already been completed when we started steel erection which made our work easier,” comments Caunton Engineering Site Manager Robert Aitman.

“The roads allowed us to bring steel on to the site easily, while the slabs gave us a firm and flat surface for the cranes to be positioned on during the erection process.”

Caunton erected a portion of the boiler house first as this is a critical part of the overall scheme. By only erecting three sides of this large steel frame, a gap was left so that the boiler and all of its large ancillary equipment could be installed.

“Once the installation work was completed, we then erected the fourth elevation and completed the roof over the boiler,” adds Mr Aitman.

The boiler house is 33m-high with the four elevations up to 35m-long. The building is a large braced frame with cross bracing inserted between the main columns, which are spaced at 5.7m intervals.

Because of their excessive length, all of the columns were delivered to site in three sections, which were then bolted together during the erection process.

The building’s roof is formed by five 35m-long rafters, which arrived on site in 17.5m-long sections, each weighing 4t. Using two 50t-capacity mobile cranes, the roof rafters were lifted individually and bolted together in the air while being connected to the supporting columns.

The turbine hall is a structurally independent building separated from the adjacent boiler house by a movement joint. Having the same width as the boiler house, albeit with a slightly lower roof, once clad the structures will look like one large building. 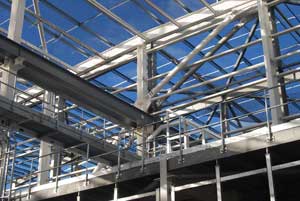 Caunton fabricated these two beams, which are both 33m-long and weigh 8t each. They were brought to site in three pieces and lifted into place individually and then bolted together once insitu.

“While the boiler was being installed we began erecting the two conjoined straw barns,” explains Mr Aitman. “We had to work in coordination with the project’s concrete team who were still installing parts of the slab.”

The two straw barns sit end-to-end and are structurally independent frames, separated by a row of double columns and a masonry blast wall.

The barns will take delivery of and store the baled straw from the local suppliers. A conveyor system and feeder, all erected by Caunton, will transport the straw into the adjacent boiler house.

Each of the identical 84m-long × 16m-high barns is a propped portal frame containing two 21m-wide spans. Again using a couple of 50t-capacity mobile cranes, the roof rafters were brought to site in three sections and spliced together during installation.

Summing up BWSC Director Christian Grundtvig said: “We are delighted with the acquisition of the Snetterton plant which adds a strong base to our portfolio in the UK and we are looking forward to making it a successful project.”