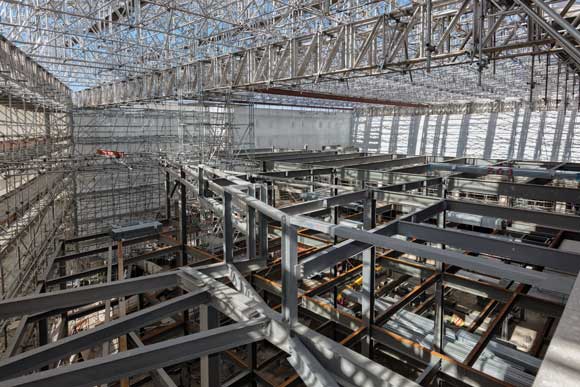 Installing new steel-framed floorplates into a refurbished 1960s shopping centre is helping to create a contemporary retail and dining quarter.

The town’s extensive upmarket retail offering will soon be enhanced when the Tunsgate Quarter project opens later this year.

This job involves the refurbishment of an existing 1960s reinforced concrete shopping centre, turning it into a contemporary destination with the addition of new steel floors.

Overall, the 7,400m² Tunsgate Quarter will comprise 26 units, 18 retail and eight restaurants. A new glazed roof is being added to allow natural light to flow into the central areas of the Quarter, while a feature steel staircase will link the new levels.

On the upper level, a series of flats, positioned along three sides of the Quarter, have been retained. The 12 existing flats are being enlarged to form 10 new apartments.

Stuart Harris, Commercial Director & Co-Founder of developer Queensberry says: “Guildford is an affluent town with an excellent retail offer, with Tunsgate Quarter at its heart. We are creating something very special and new that connects the High Street, Tunsgate and Castle Street.

“The interest and commitment from high quality operators such as The Ivy Collection, OKA, The White Company, Bobbi Brown Cosmetics and Loaf is clear testament to the sophisticated new retail and dining offer we are creating.” 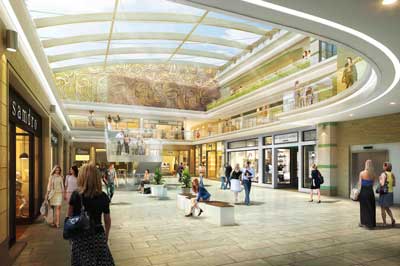 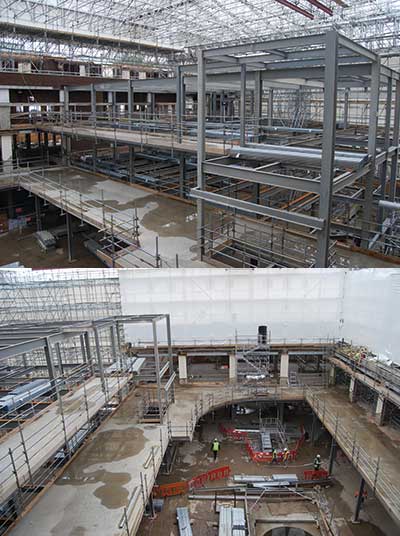 Work started on the project during October last year (2016), once the majority of the shopping centre’s tenants had vacated the premises. However, two units along the High Street are not affected by the construction and have continued to operate throughout the works.

ISG Project Manager Adam Wright explains the early part of the construction programme: “Basically it was a large cut and carve operation to the existing reinforced concrete frame.

“We have retained the façades and wings of the centre while demolishing internal parts of the scheme around the open central square, and enlarged one area with three new steel-framed floorplates.

“We have also removed the existing roof and glazed atrium and taken out most of the staircases.”

Using structural steelwork to create the new floors was always the preferred method for the scheme. The design required a lightweight solution, one that would not overload the existing foundations.

“Fortunately, the original foundations were over-engineered and so we have been able to increase their loading by adding three floors where originally there was just a single level,” says Jubb Engineering Project Engineer David Friend.

The foundations may have been re-used with no extra work needed, but the basement columns that support the new steel floors have had to be strengthened. This has been done by installing twin steel channels bolted to either side of the existing concrete columns.

One of Guildford town centre’s most popular car parks was housed in the Tunsgate basement and work has progressed to keep this facility. Column strengthening work has been planned to avoid the restricted vehicle access points which are currently used for material deliveries.

As the new steel-framed structure is supported on the basement columns, the new steel build is based around the same 5.2m × 10.4m grid pattern.

Stability for the steelwork is achieved from being tied into the surrounding concrete structure and from being designed as a large portalised frame.

As well as adding floor levels to one side of the project’s open central square, steelwork has also been used to create balconies and walkways that link to the new levels from the existing concrete areas.

On a project where it has been important to keep the weight of the steel structure to a minimum, the walkways represent the largest and heaviest pieces that steelwork contractor Gorge Fabrications has had to erect.

The heaviest pieces are three 2t, 15m-long beams that form second-storey walkways around three sides of the square.

As with most town centre projects, logistics have played a key role on this job. The Tunsgate Quarter is hemmed in on three sides by roads, and existing buildings on the fourth elevation.

The close proximity of numerous neighbours, both retail and residential, has meant the project team has had to be wary of making excessive noise, while deliveries have to be planned around the need to avoid many of the surrounding narrow streets.

All deliveries have to arrive via Castle Street, where the existing entrance to the old shopping centre’s retained basement car park offers access to the construction site.

Once materials, such as the project’s structural steelwork, have been delivered, the project team was initially faced with the problem of how to move items around the site and, in steelwork’s case, how to unload and erect it.

“It is a very confined site with no room for a tower crane, so we’ve had to set up three gantry cranes for the majority of lifting duties,” explains Mr Wright.

One gantry crane has been installed to unload materials, while two others span the site supported from a giant scaffold system that overhangs the entire project.

Gorge had to bring all of the steelwork to site in the smallest possible loads. This helped with the unloading, but also allowed the sections to be manoeuvred through the existing concrete structure.

Once the steel was on-site the gantry cranes were unable to reach some areas of the project, so most of the steel lifting and installation work was done using mini spider cranes and small spider access units. These small machines proved to be priceless as they could manoeuvre within the tight confines of the job.

“It’s been a voyage of discovery as we have had to verify quite a lot of the design as the project progressed,” explains Mr Friend. “None of the original design or architectural drawings were available, so we only knew what we had to work with after the demolition work had been completed.”

The Tunsgate Quarter is scheduled to open in October 2017.