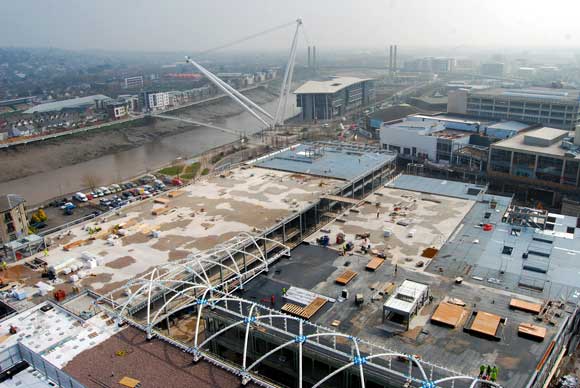 The large steel-framed Friars Walk development in Newport will create a new retail and leisure destination within a reconfigured city centre.

A central part of the city’s regeneration is Friars Walk, a retail and leisure scheme currently under construction between the River Usk and Newport’s existing main retail zone.

Director at Leslie Jones Architecture Brian Tracey says: “The scheme will revitalise Newport’s existing retail offer through the creation of modern space and the provision of new leisure facilities. Friars Walk has been purposefully designed to reconnect a disjointed part of the cityscape and create a cohesive, attractive and accessible urban realm.”

Friars Walk will deliver 36,000m² of retail and leisure space consisting of three main elements: a three-storey Debenhams anchor store, an eight-screen Cineworld complex and two main blocks of 37 double-height shop units set either side of a pedestrian covered street.

Topping the street is a curved tubular steel frame that supports ETFE lightweight cladding designed to accept the building movement differentials from the main steel frame. The tubular steel beams span the 11m wide street and are seated on large concrete plinths located on the roof of the retail units. 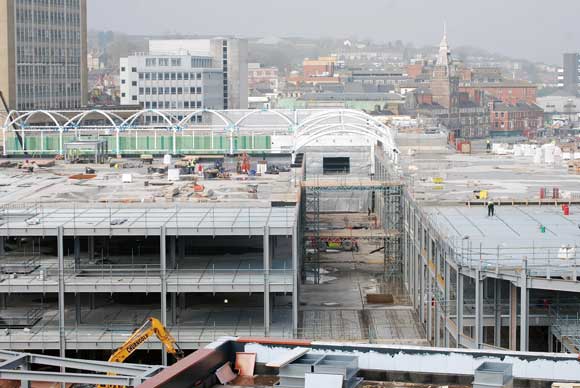 Steelwork erection has been phased around numerous groundworks

Although the Friars Walk scheme has been on the drawing board for some time, construction work only kicked off in early 2014. The site had already been cleared prior to Bowmer & Kirkland taking over, so after some initial groundworks the steel erection programme was able to start in June.

Steel erection began with the Debenhams store followed by the cinema complex, as these two structures have to be handed over first.

“Due to the various fit-out requirements, there are a number of different hand-over dates which we had to include within our steel programme,” explains Caunton Engineering Contracts Director Grenville Griffiths. “We also had to phase the erection of the retail area around sewer relocation works.” See box.

Steelwork for the three-storey Debenhams store is based around a 10m × 12m grid pattern. The adjoining retail mall, which features double-height shop units arranged in two large blocks either side of an L-shaped pedestrian street, sitting above a car park and large service yard, is predominantly based around a slightly smaller 8m × 7.5m grid. This column setting was chosen as the optimum spacing for both the car park and the retail accommodation above.

The only area in this part of the project that strays from this grid pattern is the basement service yard where a series of 25m span, full building height, Vierendeel trusses have been installed to create the large open area needed for delivery trucks.

The opposite end of the mall from the anchor store features a large public realm to be known as John Frost Square. The lower level that houses the car park under the mall features an array of restaurants around the square. Lifts and stairs link this area with the first floor retail zone and the adjoining cinema.

In order to construct the various sized cinema auditoria, the steel frame changes in this sector with a number of different spans.

Caunton completed the steelwork in April and Friars Walk is scheduled to open on 12 November. 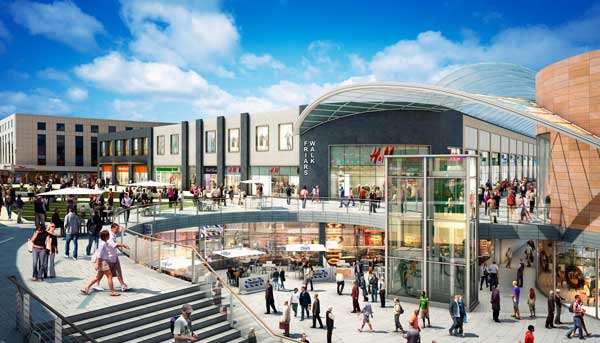 The entire project is formed by one large steel frame that is divided up into four building block units with designed movement separation joints at the interfaces.

The principal joints are to the Debenhams anchor store with the main retail mall blocks which has a central divide along the main high street, and the junction of the cinema block with John Frost Square.

Stability for the steel frame is gained from a combination of moment frames and bracing located in lift shafts and steel cores.

“Friars Walk needs to be delivered within a tight time frame. With this in mind, we designed the frame using steel as a user-friendly and adaptable product. This provided an agile frame for the exterior cladding, the design of which took inspiration from the surrounding Welsh landscape and Newport’s historic architecture,” says Director at Leslie Jones Architecture Brian Tracey.

“The exterior incorporates slate to the podium level while the retail and leisure blocks are clad in aluminium cladding and opaque glass, with brickwork to the street level façades.”

“We have two major sewers, each 5m deep, crossing the site. They both had to be replaced with one new sewer during our construction programme,” explains Bowmer & Kirkland Project Director Tony Rides.

In order to complete the relocation of the sewers without hindering the project’s tight deadline, the steel erection programme has been worked around these subterranean jobs.

The sewers run directly across the main centrally positioned retail mall, consequently Caunton has had to erect these areas in a phased sequence.

At five column locations ground level bridging beams had to be installed to span a sewer. This allowed the columns to remain true to the grid pattern, even though the piles were installed off-grid in order to avoid the sewer alignment.