Powered up with waste 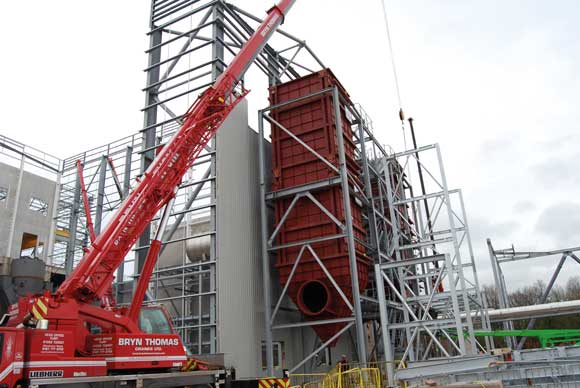 Steelwork is erected around the facility’s processing equipment

A new steel-framed waste-to-energy facility in Cheshire will help the nation reduce its reliance on landfill sites for refuse disposal.

As previously reported in NSC, the company’s other projects have included woodchip and straw burning biomass plants, all of which relied on steel-framed structures to house the process equipment and material storage.

The Hooton project is different as this is a waste-to-energy facility, the first non-subsidised merchant gasification plant in the UK, as well as being the first time the UK market will realise a gasification centre of this size, based on fluidised bed technology provided by Japan’s Kobelco.

The project is backed by UK investors and is said to be in line with the nation’s target of delivering efficient and environmentally-friendly energy, while reducing landfill use by 10% by the end of 2020.

Working on behalf of BWSC, Caunton Engineering is fabricating, supplying and erecting approximately 900t of steelwork for the project. Caunton has a strong relationship with the contractor and previously completed the steelwork packages for a number of its biomass schemes, including jobs in Brigg, Sleaford, Snetterton, Cramlington and Sandwich. 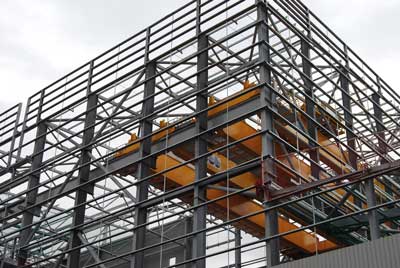 Crane beams run the length of the fuel handling building

The main structures are all interconnected but structurally independent

“It is a very tight site and the structures are all adjacent to each other on a relatively small footprint,” explains Caunton Engineering Site Manager Robert Aitman. “Site and erection logistics are playing a key role on this job as we have to work around the other trades, most notably the equipment installers.”

To this end, during the steel erection process Caunton is leaving large openings in the roofs and elevations to allow BWSC’s sub-contractors to install the plant’s large boiler and processing equipment. Once the majority of this has been installed, Caunton will infill the remaining steelwork areas, with the entire steelwork package due for completion in May.

The fuel unloading and handling building is 89m-long overall, and is split into two parts. The unloading area where trucks will deliver waste is 16m-long, while the area where the material is processed and sorted, in readiness for gasification, is much longer, measuring 73m.

The concrete substructure walls are up to 18m-high, and the steel columns then extend the building up to its maximum height of 37m-high.

The handling area’s columns are spaced at 7m centres and support a series of 26m-long box section trusses that form the roof and a clear column-free space. The trusses are tapered and measure 4m at their deepest point.

As well as supporting the trusses, the columns also support crane beams that run the length of the high-level area.

“We had to design the column/crane beam connections for fatigue as the overhead gantry cranes will be operating more or less continuously,” explains Caunton Engineering Project Designer Chris Martin.

These columns are also founded on tapered base plates that concentrate the loads into an area that is not wider than the supporting concrete walls.

Separating the handling building from the adjacent and structurally-independent boiler house is a precast concrete blast wall, positioned in between a double row of columns.

The boiler house is a large braced structure measuring 55m-long × 37m-wide and reaching a maximum height of 37m. There is also a low-level area of this structure, where the gasification process is undertaken and this area is 26m-high. An 11m-high truss creates this step in the building’s height.

Because the structure’s columns are 37m-long they were brought to site in three sections. The erection process for the columns had to take into account that one elevation of the boiler house, as well as the roof, would not be erected with the main frame, but installed later in the programme when the plant’s internal equipment was in place. Consequently, each column was erected with temporary props, which have to stay in place until the entire steel frame is erected.

Creating the roof of both parts of the boiler house is a series of 18m-long pitched rafters.

A further precast concrete blast wall separates the low-level gasification part of the boiler house from the project’s turbine hall.

A series of 20m-long spliced rafters forms the roof of the 21.5m-high turbine hall, creating yet another large column-free space.

This structure also includes high-level crane beams, but because this overhead gantry crane will only be used intermittently for maintenance, these supporting columns did not need to be designed for fatigue.

As well as the main frame steelwork, Caunton Engineering is also supplying secondary steelwork for the project, which includes walkways, staircases and platform structures.