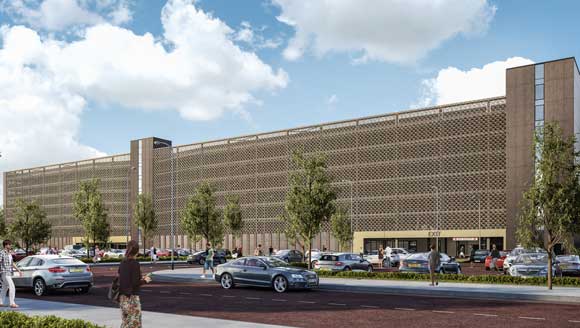 Visualisation of how the completed car park will look

Clad in order to reference the city’s maritime past, a new multi-storey car park in Liverpool has been built using a steel frame as the material offered the most cost-effective programme.

It is a steel-framed structure, based around a standardised column grid pattern of 7.5m along its perimeter, with one line of internal columns giving the car park two spans of 16m-long. The steel beams support metal decking and a 160mm-thick concrete topping to form the composite floors.

“We looked at all framing solutions, but went for a steel-framed option, with metal decked floors and precast cores as it was the most cost-effective method for this project,” says Willmott Dixon Operations Manager Peter Mason.

The damaged and, consequently unusable, car park left a large hole in the city’s car parking availability and Liverpool City Council wanted a replacement to be built as quickly as possible as the car park will not only serve the nearby Liverpool Arena and the waterfront, but also the wider city centre. 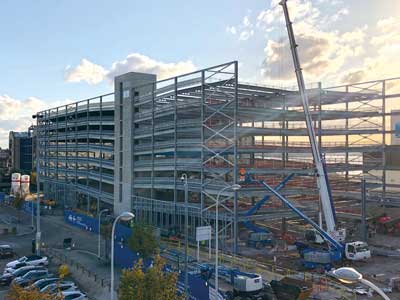 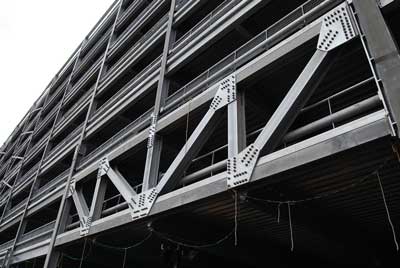 Large trusses form the access and exit points on the ground floor. 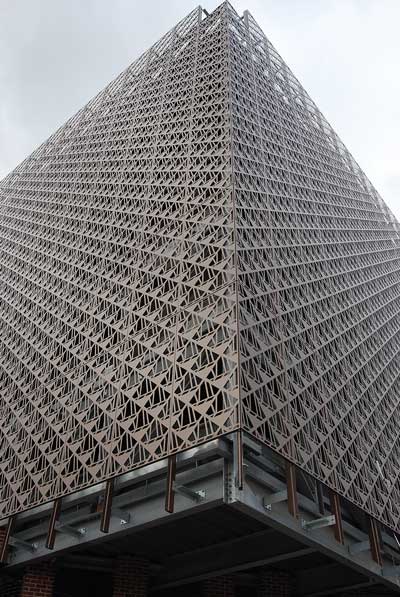 For this reason, speed of construction was another important consideration that had to be taken into account when choosing the frame’s material. It was decided that steelwork offered the fastest programme for the project team.

Main contractor Willmott Dixon started work on the new car park during the early part of 2019, having previously worked on the demolition of the adjacent damaged structure.

“One of the key drivers for us was to have a steelwork contractor on board that could cope with the car park’s fabrication complexities,” adds Mr Mason.

“All of the 16m-long beams are pre-cambered to create the 1:6 fall that each floor has from both perimeters to the of the centre of the structure.”

“Draughtsmanship was fundamental and Leach Structural Steelwork has proven to have been up to the task.”

As well as each floor having two cambers they also slope in the other direction as the car park has been designed as a Vertical Circulation Module (VCM), which is said to offer a more efficient solution for confined city plots. This design contains no external ramps as all of the circulation is via slopes within the floors, which in turn creates more parking spaces.

The steelwork programme was completed during a five-month programme, using two 60t-capacity mobile cranes and two erection gangs. They installed the steelwork in 10 phases – five on each side of the structure – with each phase built to the full height of the car park.

The perimeter columns are spaced at 7.5m centres, which was deemed to be the optimum distance to create sufficiently wide parking bays for most vehicles. To this end, there are three × 2.5m-wide parking bays between each set of columns.

Alongside the main steel frame erection, Leach Structural Steelwork also fabricated and installed the impact barriers and mesh screens. The barriers are fabricated from two CHS members, which are interlinked by channels. They were delivered to site in fully-welded 7.5m-long elements.

Within the footprint of the car park, there are five precast cores, two large ones containing both lifts and stairs, and in between three smaller stair cores. The precast cores were chosen for their speed of installation, but they offer no structural stability to the main frame steelwork, as this is all derived from cross bracings located at either end of the car park and in between the internal line of columns.

Delivering the steel to the site was a fairly routine procedure as the surrounding roads are wide enough for most trucks and the site initially had plenty of laydown space. However, many pieces of steelwork had to go on one more journey than they would ordinarily expect.

All of the project’s steel has been hot-dip galvanized, a process which was necessary because of the atmospheric environment that can be expected due to the site’s proximity to the River Mersey estuary.

“Ordinarily, the 16m-long beams would have been delivered to site after they’d been galvanized. However, we had to return them to our fabrication yard in order to cut holes in them to accommodate the car park’s sprinklers. This work couldn’t have been done prior to galvanizing as it would have damaged the steelwork,’ explains Leach Structural Steelwork Quantity Surveyor Patrick Rostron.

Aside from the main beams, the largest single elements in the car park are a series of trusses that form two large openings along the ground floor level, one for vehicle access and the other for exiting.

As ground floor columns had to be omitted to form these spaces, 15m-long × 3m-high transfer trusses were installed to form a bridge at first floor level and support the reinstated columns lines for the floors above.

The trusses were brought to site in individual sections, with each member installed during the erection programme. This proved to be a time-consuming process, especially as the trusses’ internal members are connected via gusset plates, some of which have up to 48 bolts.

This led the project team to change one of the trusses to a 1.8m-deep plate girder as this was quicker to install.
The steelwork will be left exposed and in full view within the completed structure, while from the outside, the frame will be visible through the cladding.

Summing up, LeachRhodesWalker Architects Managing Director Christian Gilham explains: “This is an engineering structure and so it was important to have the steelwork as a feature, which can be glimpsed through punched holes in the aluminium cladding.