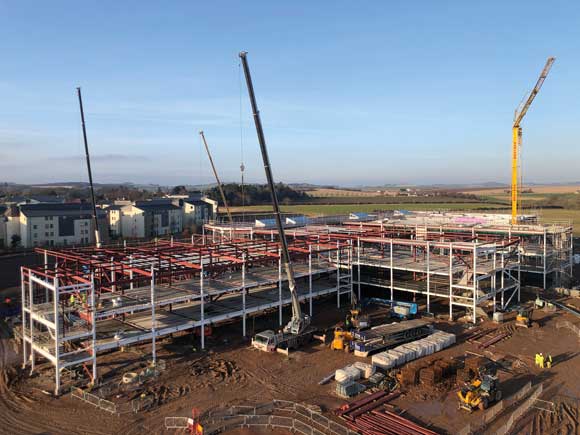 A tried and tested method, using steelwork in conjunction with precast flooring planks, is being successfully used for a sixth educational scheme in Fife.

FACT FILE
New Madras College, St Andrews, Fife
Main client: hub East Central Scotland, Fife Council
Architect: AHR
Main contractor: BAM Construction
Structural engineer: AECOM
Steelwork contractor: Hescott Engineering
Steel tonnage: 1,200tForming part of the £250M Building Fife’s Future Programme, which has seen five secondary schools and two primary schools built in Fife over the past 10 years, the new Madras College in St. Andrews will, on completion, bring 1,450 pupils together into one campus from the existing school’s two separate sites.
Madras College has a long and distinguished history and was founded in 1833 by Rev. Doctor Andrew Bell. The name of the college derives from the tutoring system Bell initiated while working for the East India Company in the city of Madras, which is today known as Chennai.

Both of the college’s existing sites are considered to be out-of-date and not suitable for modern teaching methods. The new 14,500m² college, located in the Langlands area of St Andrews, will consist of one large three-storey building with a focal courtyard, a connected two-storey games hall and a separate energy centre.

The main building will be surrounded by three outdoor social spaces alongside two all-weather pitches. 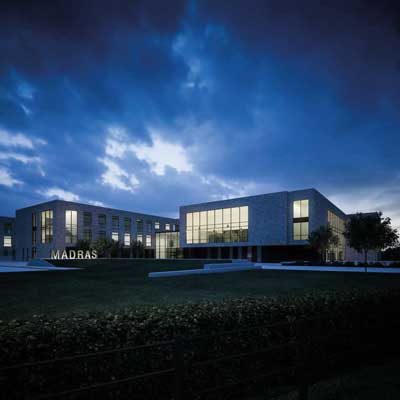 The completed college will accommodate students from two existing sites 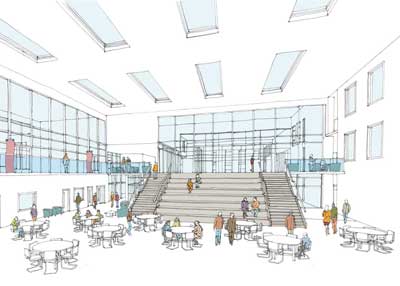 Impression of the completed dining area 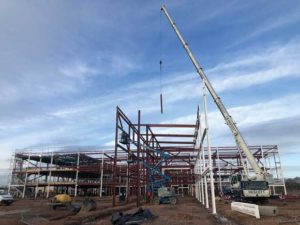 Steelwork was erected in six phases

The new school is being built on a greenfield site and forms one of the initial developments for a much larger masterplan for the area, which could include the construction of more than 1,000 new homes.

Prior to any steelwork arriving on site, BAM Construction had to engage in a major cut and fill, and soil stabilisation programme. The school’s grounds were then re-profiled to the designed levels, which then allowed 700 precast piles to be installed.

For design purposes, as well as ease of construction, the large college building was divided into six phases; two classroom blocks, a dining hall/library block, assembly hall block, a sports hall and the sixth phase consisting of link corridors.

The structural design consists of a steel frame supporting precast floor planks and a concrete topping. This solution was chosen for its speed and ease of construction, as well as for aesthetic reasons.

“The nature of the precast soffits allows an exposed finish to be adopted, where an acoustic ceiling is not required,” explains AECOM Senior Structural Engineer Calum Scott.

This form of construction is considered to be a tried and tested formula and one the client is keen to reuse. Most of the recently-completed schools in Fife have used the same construction method, including the Waid Community Campus in Anstruther (see NSC May 2016), which also had a project team that included BAM and AECOM.

All of the precast planks were supplied, delivered and installed by steelwork contractor Hescott Engineering as part of its overall package, which also included lifting precast stair units into place.

Although precast planks have been used to form the majority of the college floors, there were a few exceptions. In some areas, the planks could not be used as they would have been too difficult to install. This included a plant slab, where the presence of service penetrations made it more economic to use metal decking, and a small cantilevering area of the school library.

The design of the classroom blocks is based around a regimented steel column grid pattern. The perimeter columns are spaced at 8m centres and there are also two internal spans of 8m. On each of the block’s three floors, two rows of classrooms are separated by a 3m-wide central corridor, formed by two rows of internal columns.

Approximately, 180t of Westok cellular USFB (ultra shallow floor beams) have been used to span the corridors. This form of construction eliminates any significant downstands, with the beams residing within the depth of the precast slabs and in-situ structural topping.

This leaves service routes along corridors and into classrooms uninterrupted, further contributing to the potential for an exposed soffit aesthetic.

The cellular beams will be left exposed in the final scheme, but they will not be the only steel elements on show when the school opens. A series of 500mm × 250mm x16mm elliptical hollow section columns will adorn the school’s triple-height dining room.

Chosen for their aesthetically pleasing appearance, the columns support a series of 25.6m-long × 2.4m-deep trusses, which form the dining area’s roof. The trusses will also be on view to staff and students while they are enjoying their food.

Stability for the overall steel frame is derived from vertical bracings, and much of this is located in the classroom partition walls as well as in the stair cores.

As well as the dining area, another of the four blocks contains an assembly hall, which is another large column-free space. The hall is a double-height space and is formed by a series of 22.5m long rafters.

The college’s other large column-free space is the sports hall, which is separated from the other blocks by one of the project’s many movement joints. It is however, connected to an adjoining classroom block via a link corridor. A series of 16m-long beams forms the sports hall’s roof and open-plan space.

The New Madras College is due to open its doors to students for the autumn term in 2021.