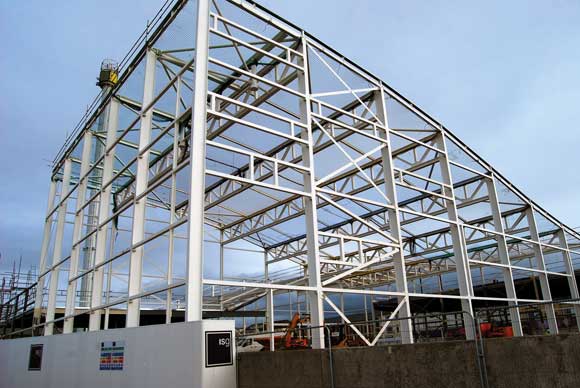 The project sits next to a former landmark viewing tower

Steel construction has come to the fore to create two large wedge-shaped halls, topped with wave-like roofs to house a waterpark and leisure space. Martin Cooper reports from Rhyl.

FACT FILE
Rhyl waterpark and leisure centre
Main client: Alliance Leisure
Architect: Space & Place
Main contractor: ISG
Structural engineer: Furness Partnership
Steelwork contractor: EvadX
Steel tonnage: 260tThe North Wales town of Rhyl is in the midst of a wide redevelopment programme of its promenade and seafront. The centrepiece of this work is a steel-framed waterpark, which on completion should help to boost the local economy by increasing visitor numbers.

Working in partnership with Denbighshire County Council, Alliance Leisure is developing the project and has appointed ISG to deliver the work as part of a long-standing framework agreement.

Located alongside Rhyl’s long and sandy beach and next to a local landmark known as the sky tower (a former viewing tower), the project sits on a plot once occupied by a Victorian pavilion and, in more recent times, a skate park.

Housed within a double wedged-shaped structure, topped with wave-like roofs, the contract will deliver a 1,200m² pool hall with flumes, slides and water play features, an adventure area containing a multi-level adventure play structure, a changing village and a café and bar area.

Externally, an existing splash pad will be retained but with additional water play equipment installed, various terraced seating areas and an external food and beverage pod.

One large steel frame houses the entire facility with a line of columns and a partition wall running down the middle of the building. This essentially separates the wet zone (aquatics area) from the dry multi-level play area.

Each of these zones is housed within a large column-free hall topped with a wave-like roof, with each one sloping in the opposite direction to the other. 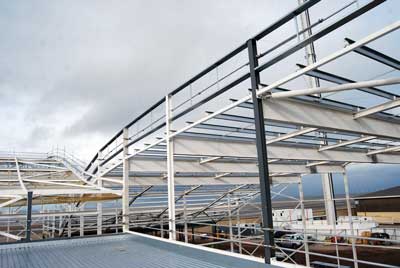 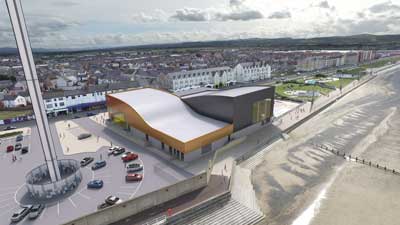 The facility will sit in the middle of a redeveloped seafront 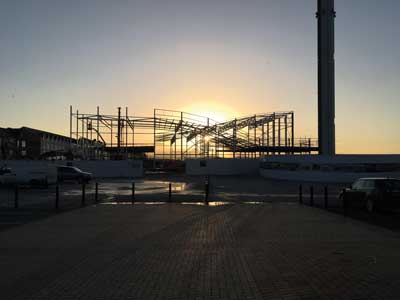 The steel was erected in six weeks

The wet zone’s wave descends from a high nearest the seafront and ends with a single-storey element with a flat roof which houses the café and bar.

On the opposite side, the dry zone’s wave ends with a similar single-storey flat roofed zone which houses changing rooms and plant rooms, as well as supporting further plant on its roof.

As well as being a nod to the waterpark’s location, the wave-like roofs, and in particular the wedge shapes, have been chosen for their efficiency.

According to the project architect, Space & Place, the two wedge shapes provide optimum volumetric arrangements offering better views through to the seafront, reducing the overall visual mass of the building and creating a more interesting architectural form.

The concept was then progressed with the introduction of opposing curved wave-like roofs to reflect the tranquility of the sea.

Locally-based EvadX was contracted on a design and build basis for the project’s steelwork, and once on site the company completed its erection work in six weeks. This work included installing approximately 600m² of metal decking for a plant deck.

Perimeter columns are generally spaced at regular 6m centres. However, due to the potential for excessive wind loadings because of the building’s seafront location, these members were changed from UC sections to UBs.

“Using UBs was an economical design procedure as it gave us a deeper steel member, which offered better resistance against the wind,” explains EvadX Project Manager Steve Morris.

“Because of the close proximity to the sea we have also had to paint the steelwork with a high-spec protective coating to prevent corrosion in this aggressive environment.”

To create the wave-like forms of the two adjacent halls’ roofs, a series of 28m-long × 500mm-deep trusses spans the wet zone, while 28m-long 838UB sections span over the dry zone. The steelwork is set in stepped formation, with shorter and higher supporting columns rising and falling to create the wave appearance.

“Trusses were needed to accommodate the wet zone’s ductwork and services,“ says ISG Project Manager Steve Lowton. “The dry zone has fewer services and these will be accommodated under the long-span beams.”

A couple of trusses support flumes and consequently they have been designed to accommodate the associated extra loadings of the water and movement. EvadX welded nodes to the underside of these trusses which will act as a connection to the flumes when they are installed by the specialist contractor.

EvadX used a single 50t-capacity mobile crane for most of the steelwork erection. Both the trusses and the 28-long roof beams were brought to site in two pieces, which were spliced together on the ground before being individually lifted into place.

“The form of the building has been designed as a modern structure, but also one in keeping with its surroundings, and as such we are using materials that are in keeping with the overall Rhyl master plan,” says Mr Lowton.

A 3m-high masonry wall skirts the structure at ground level where impact resistance is required. Above, generous elevations of glazing and polycarbonate translucent panels are fixed to three rings of steel box sections that wrap around the frame at 3m, 4.2m and 8.4m-high levels.

Alliance Leisure Senior Business Development Manager Julia Goddard says: “The development in Rhyl will completely transform the town’s leisure provision, creating a standout attraction which will draw an estimated 35,000 extra visitors to the area each year.

“Creating sustainable leisure facilities which inspire community engagement is always our ambition and this latest development project will certainly achieve this.”

The Rhyl waterpark and leisure centre is due to open in early 2019.