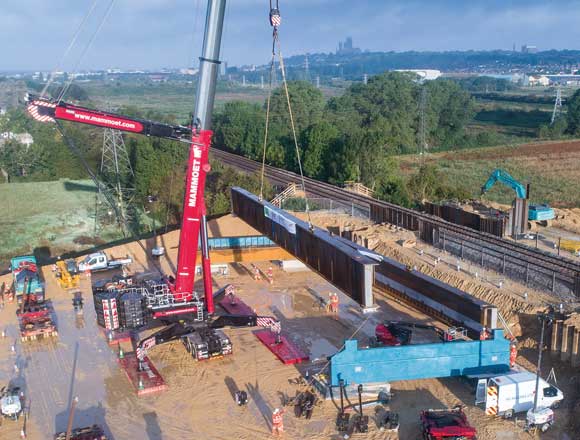 Forming an important part of the Lincoln A15 Eastern Bypass, a weathering steel bridge carrying two railway lines has been successfully installed.

When complete, it will link with the existing northern relief road, thereby becoming the next step towards creating a complete ring road around Lincoln.

One of the crucial elements of the scheme is the new bridge carrying the Lincoln to Spalding railway lines over the new dual carriageway.

A steel solution, using weathering steel, was chosen for its low maintenance requirements and cost-effectiveness.
Repainting the bridge at a later date for maintenance would have been logistically difficult, bearing in mind the necessity for a road and rail closure.

“Because we’ve used weathering steel, once this structure is erected there is no need for any future painting,” says Cleveland Bridge Project Manager Rob McBride.

In contrast to other steels, which always look their best immediately after being erected, weathering steel is said to improve after a couple of years’ exposure to the elements. It is not only on bridges that the material is used, architects increasingly specify it for use on buildings, fully exposed.

“The colour of weathering steel will change from grey blasted steel as it undergoes the rusting process to a light orange / brown and then a dark brown. Weathering steel contains specific alloy elements that produce a stable rust layer that develops over time to form a protective barrier which significantly reduces corrosion”, explains Mr McBride.

“The appearance of mature weathering steel bridges often blends in with the environment which looks aesthetically pleasing and surprises many people who think the steel will just look rusty.” 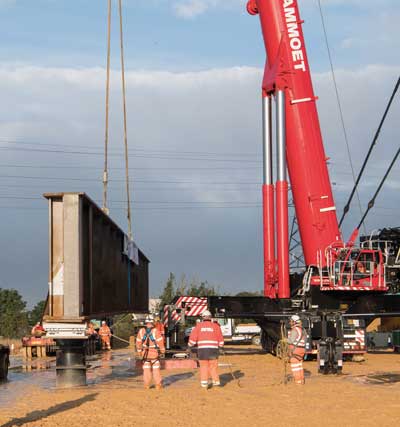 The installation was completed in 72 hours

There is also an environmental and cost advantage connected with using weathering steel. No painting in the future will obviously save money, but issues associated with VOC emissions from paint coatings are also avoided, which is good for the environment.

Cleveland Bridge was subcontracted by BAM Nuttall to fabricate and erect the critical rail bridge for its end clients, Lincolnshire County Council and Network Rail. A trial assembly was undertaken at Cleveland’s Darlington facility in order to identify and resolve potential snags, and to ensure the installation would go smoothly and to plan.

“In our substantial operational facility we were able to do a trial assembly, so we could check connections, alignment and reduce the amount of time spent on site doing remedial work. This increased cost-effectiveness and ensured a high-quality project outcome,” adds Mr McBride.

Additionally, as part of the company’s requirement to significantly reduce site time, Cleveland Bridge’s scope of works included both the waterproofing of the steelwork and concrete works, which were also done at its facility in Darlington.

Cleveland Bridge says it was engaged early in the design stage to ensure the optimum solution was developed for the bridge, which needed to have a longer span than the old structure as it carried the rail lines over a new and wider road.

“The new bypass was under construction simultaneously, so our work involved collaborating closely with all partners to ensure we met BAM Nuttall’s Beyond Zero sustainability objectives,” says Mr McBride.

Cleveland Bridge supplied a fabrication and assembly package which involved its engineering, project management and site services departments. The structural weathering steel was a grade that complied with BS EN 10025-5 and fabrication was in accordance with BS EN 1090-2 for Execution Class 3.

The bridge deck is 40.5m long, 9m wide and weighed just over 620t. All bolts used were weathering grade TCBs, chosen for their durability and slip-resistant characteristics.

The two main bridge girders were assembled and welded in the factory to form two 40m-long sections, each weighing 107t, which were then delivered to site as complete pieces. This created complicated planning for transportation as it necessitated road closures and required police access permissions.

However, this method improved installation speed and accuracy, while reducing the requirement for on-site services and works such as welding.

The bridge sections, including the two main girders and the connecting cross members, were installed using two cranes – a 750t-capacity unit and a 200t-capacity crane – to lift each section into place.

Supported on the cross members, the steel decking was laid diagonally to address the complexities of the camber.

To ensure as little rail disruption as possible was caused, the new structure was assembled close to the existing bridge to very tight tolerances. During a 72-hour rail blockade the old bridge was demolished and the new one slid into place.

Cleveland Bridge says this was a complicated process and was achieved via the accurate setting and loading of the beams, which required both its site team and clients to work as one team. The Lincoln Eastern Bypass LEB Railway Bridge was completed on time and within budget. Essential to this success was the collaborative working relationship with the client.

The entire Lincoln Eastern Bypass is due to open at the end of 2019.

Bridge girders on their way to site