On track for redevelopment

Posted on November 14, 2012 by NSC in Projects and Features, This month's featured stories 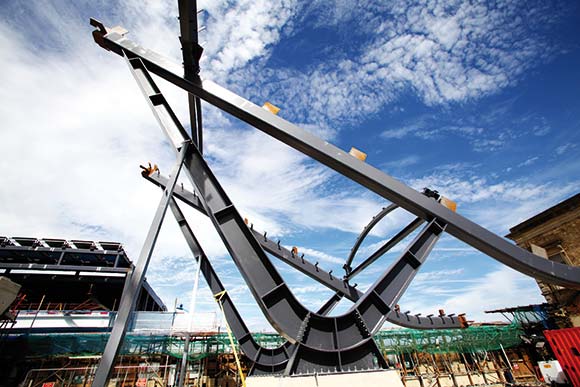 Supporting V shaped columns are a feature element of the project

One of the UK’s largest infrastructure projects is under way at Reading station. Reliant on steel construction, the work includes time saving modular offsite assembly and a new pedestrian footbridge which was launched across live rail tracks. Martin Cooper reports

Once renowned for the three B’s: brewing, bulbs and biscuits, Reading’s economy has in recent times undergone a transformation, and today a host of global IT and electronics companies have based themselves in the Berkshire county town.

Less than 40 miles from London and with good links to the region’s airports, the town’s population and its attractiveness as a location for UK headquarters are both expected to increase. 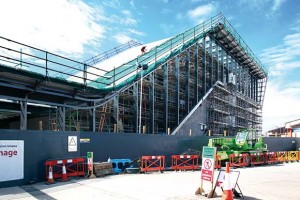 Reading is also one of the busiest parts of the UK’s rail network, and an on-going multi million pound redevelopment of its station is seen as a vital stimulant for growth.

The project will ultimately increase capacity at the station and reduce delays through a new track layout, new platforms and entrances to ease congestion, as well as a new viaduct to the west of the station.

Network Rail as part of the overall scheme has awarded a number of contracts and one of the largest, for the rebuilding of the station, has been assigned to a Costain/Hochtief joint venture.

Bill Henry, Network Rail Project Director, explains: “Five new platforms at Reading will increase capacity, enable us to get more trains through and will mean better journeys for passengers. The new station will be more accessible, more modern, and improve the experience of the 14M people that travel through every year.”

A large proportion of this contract is reliant on steel construction. Cleveland Bridge has fabricated, supplied and assembled a new footbridge, while the Bourne Group is erecting the new station structures at either end of the bridge. These are known as the new northern entrance and the western gateline. The company is also delivering and installing new modular canopy platform roofs, with the canopy system covering a distance of some 1.3km.

The Bourne Group started work on site last March with the erection of the northern entrance, a structure that will give Reading station a new second entrance as well as housing staff offices.

The northern entrance building has four levels and consists of 3,500 individual pieces of steel, weighing in excess of 600t. According to Kevin Clarke, Bourne Group Divisional Manager, the structure involved some tight tolerance 500mm deep fabricated mullions, composite floors, the use of large SHS sections, escalator support steelwork, movement joints and a complex mixture of both hot and cold rolled sections throughout.

The steel braced frame of the building is based around a regular grid and incorporates cellular beams – for service integration – throughout. 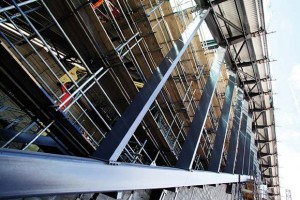 Prior to steel erection starting on this part of the project, the main contractor had already installed the ground floor slab. This aided the steel erection programme, as Bourne was able to use the level floor for its MEWPs (mobile elevating work platforms).

Bourne’s package also included the installation of precast stairs and lift cores for this building.

The superstructure of both the northern entrance and western gateline buildings consists of a steel frame with metal decking, utilising a large quantity of secondary steel to support roof cladding, soffits, internal ceilings, masonry, gutters and vertical façades.

For the western gateline building Bourne erected a series of supporting V-shaped columns, each weighing 6t and fabricated from tapered plate girders.

The V-shaped columns were delivered to site in three sections and bolted up during installation. Designed as an architectural feature element of the project, there are three V’s in the western gateline building and then a series across the platforms supporting the new modular canopies  – on platforms 7 to 15 – creating a clear uniform design.

The main roof rafters consist of three 650 x 450 x 36 RHS jumbo sections, which were curved and then welded at Bourne’s factory in Poole, Dorset, before being given an architectural finish and transported to site. 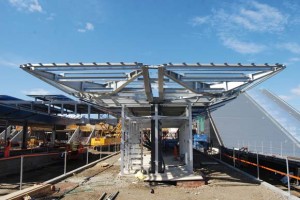 New canopies are being erected over existing and new platforms

New modular canopies are being fitted not just to the existing station platforms but also over the five new platforms being constructed as part of the redevelopment. The canopies are supported by a column and spine beam configuration. Once complete, Bourne will have installed a total of 450 canopy modules, adding up to a total of 1,144t of steelwork.

Each canopy module is bespoke and Bourne has used its expertise in this form of construction from its previous work at Farringdon and Blackfriars stations.

In order to minimise disruption at this very busy railway station, offsite construction is being utilised for the canopies.
Once each canopy unit (most measure 8m x 3m) has been assembled it is then handed over to Lakesmere, the cladding contractor, before being sent to site ready to be installed.

Both companies are sharing Bourne’s Poole facility for this integral work.

Prior to the canopy modules being erected the supporting column and beam steelwork is installed along the platform. This is generally done the previous day, but as Mr Clarke explains, the work can only be done during the night.

“Firstly, we have to wait until the platforms are ready and the old roofs have been removed from the existing platforms,” he says. “Secondly, most of this work can only be carried out during short four hour night time possessions.”

The project has also posed a number of other time restraints, such as the installation of canopies for platforms 5 and 6. These had to be completed before the Olympics, ensuring the Reading to Gatwick line was fully operational in the run up to the Games.

Logistics is playing a key role in the canopy installation, a process which will be ongoing into the New Year. For many of the platforms the process consists of an initial delivery of all canopies to Forbury, located a few miles down track from the site.

From here each unit is craned onto wagons, equipped with onboard cranes and delivered to site by rail for erection. Close coordination between the station’s signalling staff and Bourne’s project team has ensured disruption is being kept to the absolute minimum.

For the five new platforms the canopy installation is slightly easier as Bourne can get a mobile crane positioned onto the site. “There’s more space on that side of the station,” says Mr Clark. “So canopies are being lifted over the rails for installation, but again only at night.”

Passenger safety is of the highest priority and is being achieved through a combination of night time construction, the removal of any hazardous materials, as well as securing all working areas. Modular construction of the canopies has also helped lessen potential risks as it has reduced the amount of man hours on site by 80 per cent.

The project’s longest roof canopies, at 17.5m, have been installed on the station’s new footbridge, a structure which constitutes another steel construction aspect of the overall job and the part being delivered by Cleveland Bridge.

The 96m long x 30m wide pedestrian footbridge – which has an overall weight of 1,070t – will link the north entrance building to the western gateline, spanning and providing access to platforms 7 to 15.

Structurally, the bridge is formed by four lines of 1.4m deep plate girders running between the two new buildings, connected by 1m deep plate crossbeams forming the deck. The side and roof trusses of the footbridge are formed by 500mm x 500mm jumbo hollow sections. 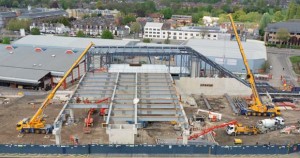 Because of the structure’s length and the fact that it spans a functioning and busy railway station, it was constructed in three separate stages, adjacent to the northern entrance building but also on its supporting piers.

Each of the first two stages, prior to being launched, were erected on the piers which span the five new platforms. Consequently, the steelwork erection was not being carried out over live railway lines.

Stage 1 and stage 2 were launched during July and August respectively. The launches were designed and carried out by Cleveland Bridge’s sister company Dorman Long Technology. The method relied on a series of strand jacks moving the completed structures, with the bridge supported during the operation by PTFE pads, placed under the outer girders and on top of the piers.

The initial portion of the bridge to be erected (stage 1) measured 50m x 30m and consisted of 550t of steelwork. Prior to the launch, metal decking, modular roof canopies and shuttering were installed, adding a further 200t of weight.
“This cut down on the amount of work which needed to be done over the railway tracks,” says Mr Binden. 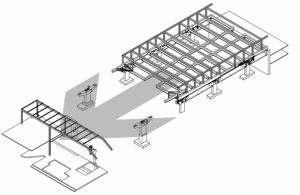 The first section of the footbridge was assembled on concrete piers and then pulled by strand jacks towards its final position adjacent to the Western Gateline building. This then made room for the second section to be assembled and consequently launched

Stage 1 was launched approximately 28m out over the railway lines, a procedure which took five night-time possessions to complete and had to be done before the Olympic embargo on works was enforced. While these possessions – 1am to 4am – were active, train services were still in operation on the adjacent lines.

This made the launch slightly more onerous as the very short possession window gave little actual launching time. However, things were different for the second launch.

“Network Rail was so impressed with the safety and the way we completed the first launch, it was happy for us to proceed with the second one, during the Olympic embargo and without having to stop when trains passed,” adds Mr Binden.

Before the second launch took place during August, stage 2 of the footbridge was assembled. The structure was built over the new platforms, on the piers vacated by the first launch. Slightly smaller at 24m long, this section was connected to the first stage and the combined structures were then launched 18m to the final position adjoining the western gateline.

The second launch was completed during night-time posessions, after which the entire structure had to be de-jacked into its final position, a procedure which took a further three days work.

Stage 3 of the bridge construction has now been completed and this consisted of erecting the 23m long infill area between stage 2 and the northern entrance. 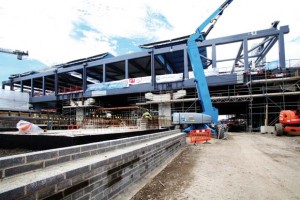 Two bridge launches were successfully carried out by Cleveland Bridge

Commenting on the work so far completed, Brian Fisher, Costain/Hochtief Project Manager, said: “Everything we deliver has to be done around an operational railway which obviously brings its own demands.

“We’ve worked hard with Network Rail to minimise disruption to our customers throughout this project, and the team should be commended for completing the challenging bridge launches without impacting our services,” adds Mark Hopwood, First Great Western Managing Director.

The Reading station redevelopment programme is scheduled for completion in 2015. 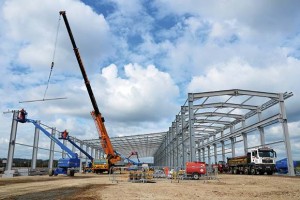 Reading’s existing train care depot will be demolished, as it is located in an area due to be redeveloped. The new facility will be capable of maintaining and servicing existing trains, as well as providing capacity for future rolling stock.

Caunton’s steel package also required the erection of seven ancillary structures, but by far the largest building of the contract is the train care depot which is a portal framed structure measuring 210m long x 37m wide, with a height of 11.2m.

A total of 820t of structural steelwork was erected for the depot and this included overhead crane runway beams, which span the entire length of the building, plus a thousand rail support stools, which carry rail tracks through the building.

Construction of the train depot facilities began last January and work is scheduled to be completed by August 2013.