All change for Reading station redevelopment 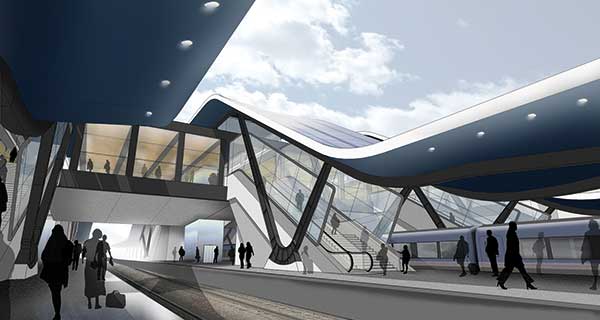 Work to enlarge and redevelop Reading station, one of the busiest parts of the UK’s rail network, is progressing on schedule with steel construction playing a pivotal role.

The scope of works to be carried out includes five new platforms and a new footbridge, a new north entrance building and western gateline building, as well as wider rail bridges for the station’s approaches. 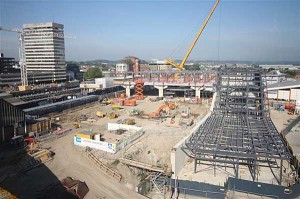 The steel-framed structure will provide access to platforms 7 to 15 and will connect into the station’s new north entrance building and western gateline building, on opposite sides of the station.

The bridge is formed by four lines of 1.4m deep plate girders connected by a series of 1m deep girders. The structure’s sides and roof are formed from 500mm × 500mm Jumbo Hollow Section members.

The structure is being built in three stages and assembled on a site adjacent to the railway lines. Stages one and two, measuring 50m long and 24m long respectively, will be launched out over the rail lines into their final position during two operations scheduled to take place in July and August.

The launch operations will be carried out by Dorman Long Technology, using a number of strand jacks, with the bridge supported on PTFE sliding pads under the outer girders at the pier locations.

Once the first two stages are in place, stage three consists of a final 22m long infill section which will be erected in-situ.

The total weight of the bridge steelwork is 1,070t.