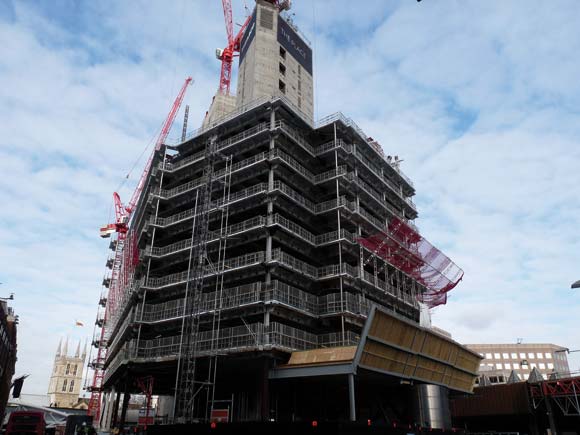 A large steel safety canopy, able to take loads of up to 8t, was installed above adjacent bus lanes

A steel frame has proven to be the right choice for a commercial project being constructed above an array of London Underground assets. Martin Cooper reports from The Place.

The South Bank area around London Bridge has changed out of all recognition over the last few years. Smart new steel framed office blocks and restaurants along the Thames waterfront have replaced dark Victorian warehouses, while adjacent to London Bridge Station developments have radically altered outdated rail infrastructure and the station environs.

The most eye-catching development is known as London Bridge Quarter (LBQ) which incorporates The Shard (the EU’s tallest building), improvements to the railway and bus stations, a new landscaped public realm, and last, but not least, The Place.

Designed by renowned architect Renzo Piano, The Place is an innovative steel framed headquarters building which will provide 40,000m² of efficient office space within a 17-storey structure (the building has plant levels on floors 18 and 19). 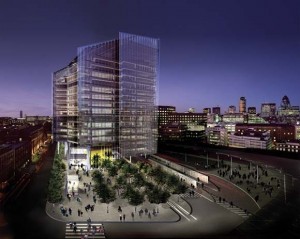 Artists impression of the finished project

Located in the heart of the LBQ and spanning three lanes of the new bus station, the structure has posed the construction team a number of unique challenges.

Below ground the building’s foundations are constrained by a host of London Underground assets, and this has demanded some innovative engineering solutions as pile locations are limited.

Meanwhile above ground, maximising the lettable office space, the building’s steel framed floorplates expand outwards at level 3, with the aid of cantilevering spans of 14m.

The spans are not regular, they are longer on the east elevation than on the west, and this means the building is out of balance. In the north-south direction it is out of balance as well, because of the limited columns. To stop the structure from tipping, the cores provide the lateral stability, resisting the gravity loads from the cantilevers.

This balancing act has been one of the biggest challenges, as the structure was subject to movements during the construction which also had to be accommodated.

“Steelwork was the ideal material for constructing this project,” says Flan McNamara, Sellar Project Managing Director. “It has given us the required efficient structure with long cantilevers, erected on a constrained site with minimal disruption to pedestrians and traffic. Below ground, steel plunge columns allowed us to conduct a top-down programme, while an on site archaeological dig was ongoing.” 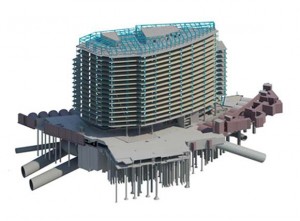 Pile locations were limited due to the amount of London Underground assets beneath the site. A lightweight steel frame has proven to be the correct solution.

Unusually for a structure of this height, the basement is no more than 50 per cent of the overall footprint. This is because Northern and Jubilee Line underground tunnels, escalators, vent shafts and escape stairs as well as the main London Bridge underground ticket hall, are all within the building’s footprint, sometimes only a matter of feet away from the basement walls.

With so many subterranean obstructions, column and pile locations were extremely limited and had to be carefully planned.

“Where we couldn’t pile we have installed non load bearing columns, more architectural than structural, to give the building a symmetrical look,” says Matt Massey, Mace Senior Project Manager. “In these areas the steelwork is all hung from the concrete cores.”

The early part of the programme witnessed a rather busy and congested site. After the majority of the footprint was cleared and the basement was being excavated, a team of archaeologists from the Museum of London came on site. The investigation unearthed a host of interesting finds including medieval remains and the walls of two Roman villas.

However, work had to continue around the dig and the installation of a total of 56 fabricated steel plunge columns allowed main contractor Mace to progress the project.

The slipforming of the two cores was completed on time as they are supported on 40 of the plunge columns. A number of large diameter bored piles have also been installed, including what is believed to be the UK’s biggest.

“This pile is up to 2.7m diameter and 58m long; it was installed during one 20 hour long operation,” explains Mr Massey. “It supports one of the main and most loaded columns in the building and it has to deal with loads of up to 32 mega newtons.”

With the cores complete steelwork erection was able to commence and one of the first tasks was to form the slab of level 0, which effectively made a bridge or crash deck above the museum workers, allowing them to continue working safely while The Place structure began to rise up in earnest.

Another early part of the steelwork programme was the erection of a temporary safety canopy around the elevations spanning the bus station. Safety is paramount, and this heavy duty system comprises 61t of steel and could withstand drop loads of up to 8t.

A phased steel erection programme was used, due to the complexity and the long cantilevers. 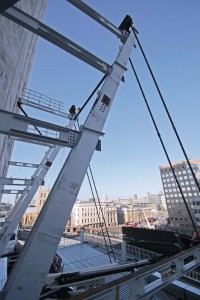 Steelwork was initially erected up to level 3 using temporary props, as very few of the columns (as previously mentioned) are load bearing. Above this, up to level 12 a temporary support system of Macalloy bars was used, holding the floors in place and allowing the props below level 3 to be removed.

The erection sequence involved Severfield-Reeve partially erecting the raking columns to level 8 and from these the Macalloy bars were suspended, holding each floor as it was completed.

“As each floor was completed we had to monitor and adjust the temporary Macalloy system,” says Richard Tarren, Severfield-Reeve Project Manager. “We had to keep to some extremely tight tolerances, otherwise the cladding programme would have been affected.”

The eastern side was initially erected to level 12 and then the western side followed. The remaining eight levels were then erected in a more traditional manner with the topping out being achieved last June.

“Only when level 12 was complete with the permanent hangers in place, giving us the permanent load paths, could the temporary props be released,” explains Jack Adams, WSP Technical Director.

The loads from level 12 and from the permanent hangers are applied to the core through steel beams which are fixed to the core with embedment plates.

One of the final steel elements to be erected was the winter gardens which stretch from level 3 to level 13 on the western elevation. This was simply bolted onto the already completed main frame in stages. The winter garden is supported on one Y-shaped column, positioned at ground level and brought to site in three pieces.

The Place is aiming for a BREEAM ‘Outstanding’ rating and is due for completion in mid 2013.