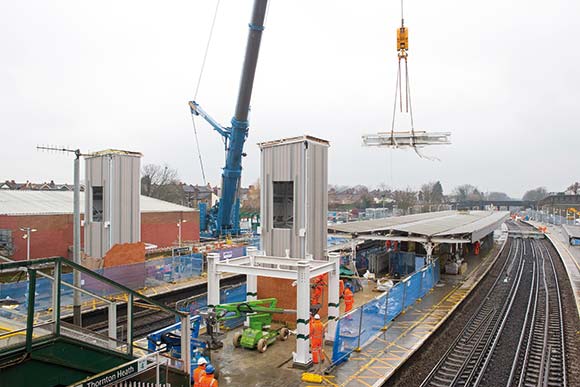 Steel members are cranked into position over rail lines

Prefabricated steel elements have played a key role in a station access improvement programme that was successfully completed during a 51-hour weekend possession.

Part of Network Rail’s £370M Access for All programme, steelwork installation has been successfully completed at Thornton Heath station in the London Borough of Croydon, south London.

Access for All is a major scheme to improve accessibility at 160 train stations around the UK and involves installing lifts, ramps and associated bridgeworks so passengers do not have to rely solely on stairs. Referred to as non-discriminatory access solutions, the programme also includes constructing longer platforms and more accessible toilets.

“With these sort of projects it’s all about reducing the amount of time needed for rail possessions,” says Derek Dowall, Spencer Group Project Manager. “Steelwork helps as it can be prefabricated into large elements that can be brought to site and quickly lifted and bolted into place.” 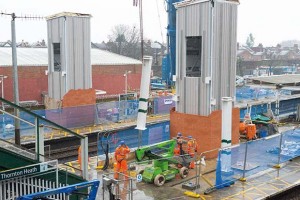 Using prefabricated steelwork ensured the job was completed on schedule

Before the possession and steel erection process got under way, Spencer Group had been on site for four months completing the enabling works.

“We had everything set up on the Thursday so we were ready to go the moment we took possession of the track on Friday night at 9pm,” adds Mr Dowall.

The entire erection procedure was completed using a single 500t capacity mobile crane, positioned in a car park adjacent to the station. All of the steel elements were prefabricated by Billington Structures and fitted out entirely. This meant they could be installed once on site as completed units with no follow-on trades required.

“Taking into consideration the time restraints we would be under during the possession we carried out a trial erection at our depot in Yate, Bristol,” says Alan Dutton, Billington Structures Project Manager. “This was an ideal opportunity to identify any potential problem areas before the live installation and to familiarise the installation team with the varying steelwork elements.”

Despite untimely weather conditions including strong winds and snow, the Billington Structures project team remained undeterred. When the weather abated the team continued unaffected for the rest of the possession. 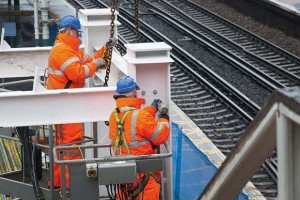 “The job was a significant undertaking but once the wind eventually dropped we were able to progress. However there were moments when I thought we were going to be beaten by the weather but the guys on site were excellent and showed their expertise,” explains Mr Dowall.

Once supporting columns were in place, Billington Structures initially erected the two bridge elements that span the four railway lines. These two identical elements weighed 16t each and were 15.5m long.

Bringing in fully prefabricated steel sections not only led to a speedier construction programme but also eliminated the need for a number of other on site follow on trades, it most importantly meant that as soon as the 51-hour possession was over the bridges were open for passenger use. 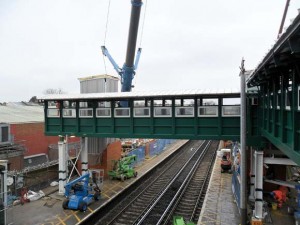 A large bridge section is lifted into place

The final steelwork to be erected on the Monday morning was the third bridge span. This section was slightly heavier (16t) and longer (16m long) than the other two spans, and connecting the main bridge with the station building, forming the upright part of an overall T-shaped bridge configuration.

Part of Billington’s overall works contract involved the removal of two existing staircases. These could not be removed until the bridge was installed and deemed fit for passengers to use.

“Should we have encountered any problems with the final bridge span the existing stairs would have remained in place as passengers wouldn’t have had any access to the platforms,” says Mr Dutton. “However, as predicted, the final section fitted exactly and the lift and installation went as planned.”

During the programme Billington also installed two prefabricated staircases, each one weighing 12t and connected these to the bridge spans.

Three steel framed lift shafts were also lifted into place. These arrived on site as 12m high lattice frames formed from box sections. The lift shafts were the only elements to be installed during the possession which were not ready for use on the Monday morning.

Once the shafts were erected they needed to be clad with brickwork before lifts were installed. The overall contract, which also includes lengthening the station platforms, is due to be completed in July.