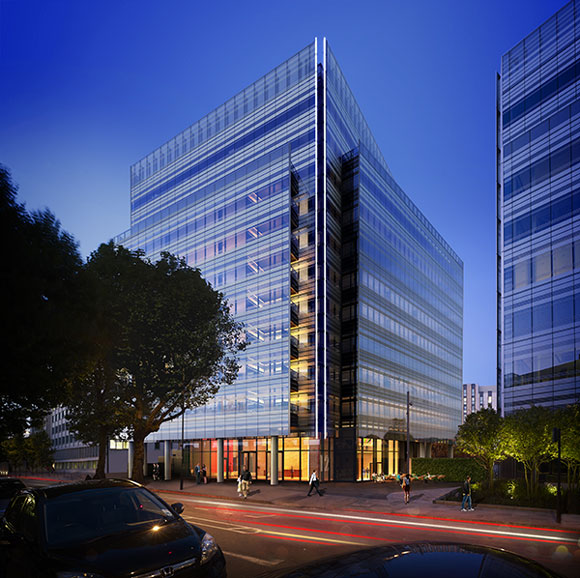 Forming the second part of a scheme, 12 Hammersmith Grove is slightly larger than its neighbour, No 10

FACT FILE
12 Hammersmith Grove, London
Main client: Development Securities
Architect: Flanagan Lawrence
Main contractor: Wates Construction
Structural engineer: Pell Frischmann
Steelwork contractor: William Hare
Steel tonnage: 2,000tThe construction of commercial developments in the capital is on the increase, a sure sign that the industry as a whole is on the up.

An array of prestigious office schemes are currently under way in all areas of central London with a host of others in the offing. In Hammersmith, the second and final phase of Development Securities’ office-led regeneration scheme is close to topping out.

The scheme consists of two similar office blocks adjacent to the Hammersmith & City Underground station. A Wates Construction-led project team completed 10 Hammersmith Grove in 2013, and the same companies are now working on the slightly larger neighbouring No.12 block.

“Both of the building’s designs are of the same family, although No.12 has two more stories and larger floorplates,” Pell Frischmann Director Mike Hitchens says. “Having already designed the first structure we’ve been able to collate project team feedback and thereby tweak the design of No.12 to make it more efficient.” 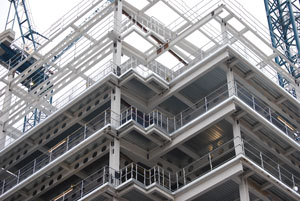 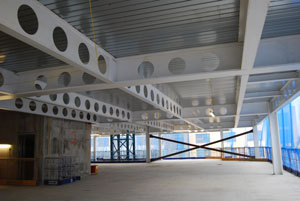 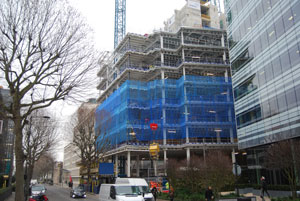 The building occupies a plot adjacent to an underground station

Designed by architect Flanagan Lawrence, the project has been funded by Scottish Widows Investment Property Partnership Trust and is being delivered on the site of a former NCP car park.

Like its neighbour, 12 Hammersmith Grove is a steel-framed composite designed structure, utilising long-span Fabsec cellular beams throughout for economy and to allow the integration of services within the structural void.

Two centrally placed cores provide the steel frame with its stability, while the majority of the structural grid follows a 7.5m x 10m pattern throughout the building. This grid also incorporates some longer spans of up to 15m on all floors.

To incorporate the 15m long spans, make sure the beams were stiff enough to negate any footfall vibration, and have big enough holes to accept all of the services and thereby keep floor-to-ceiling heights the same, the cellular beams are all 650mm deep sections. They incorporate 450mm diameter service holes and support a metal deck with a 150mm thick slab.

The reason for the inclusion of four internal columns on each floorplate is because the structure steps back at eighth and ninth floor levels to provide outdoor terraces.

Without these internal columns large transfer structures would have been necessary and they would have interfered with the desired constant floor-to-ceiling heights.

In order to achieve a contemporary industrial-like office environment, something which has been incorporated into the design at 10 Hammersmith Grove, all of the cellular beams will be left exposed within the completed building.

Many of No.10’s tenants are media companies as this part of west London, because of its proximity to the BBC studios in White City, is fast becoming a media hub.

To attract similar tenants to occupy No.12 it is considered important to have this modern design with as much exposed steelwork as possible.

“That’s not to say tenants have to stick to this design,” adds Mr Cutler. “There is the flexibility that they can always add a false ceiling if they want.”

As the beams will be left exposed, extra care has been taken with the design’s detailing and connections in order to achieve an aesthetic look, while all secondary beams are spaced at regular 3.5m centres.

“We’ve used a combination of intumescent and non-intumescent white paint for the beams, because they will be on view in the completed building. Any minor handling damage to the coating system has been remedied onsite,” says William Hare Project Director Pat Egan.

Steelwork contractor William Hare began its steel erection programme in October 2014 and completed the job last month (March). It is due back on site later this summer to install a steel BMU (Building Maintenance Unit) and a plant grillage on the building’s roof.

Prior to the company starting onsite, Wates had completed the enabling works, which included the installation of piles to a maximum depth of 30m.

All of the steelwork was erected using the site’s two tower cranes with two floors erected at a time before the metal decking was installed.

Both of the scheme’s buildings will eventually share a common service yard, but during construction all steelwork and other deliveries arrives on site from No.10’s service yard entrance.

Once the project is complete, this service yard access route will be paved over and turned into a pubic realm between the two structures. Access to the shared service yard will then be via a new roadway, which is incorporated into the ground floor area of No.12.

12 Hammersmith Grove is due to be completed in early 2016, and is aiming to achieve a BREEAM ‘Excellent’ rating.