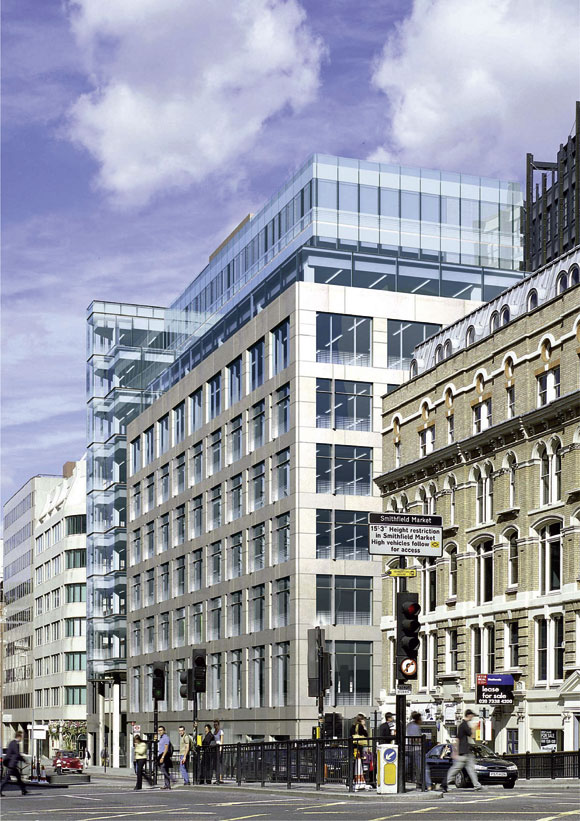 Up to the 6th floor the building is clad with limestone, while above this level the walls are glazed

Much of today’s construction is governed by cost and efficiency, and increasingly sustainability. Consequently, when an opportunity arises to make substantial cost savings and use fewer materials during the works, the opportunity simply has to be taken.

A case in point is British Land’s latest multi-storey office development in central London. Known as Ludgate West, the building is situated on Farringdon Road and is only a stone’s throw from St Paul’s Cathedral.

The building will eventually offer 11,800m² of office space on ten levels and is a steel framed structure comprising a concrete basement level and two concrete cores. 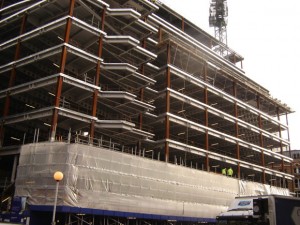 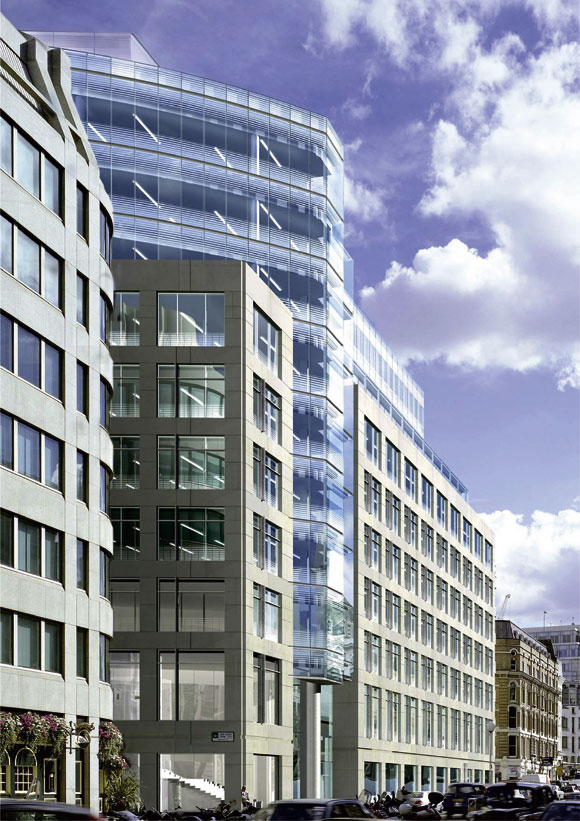 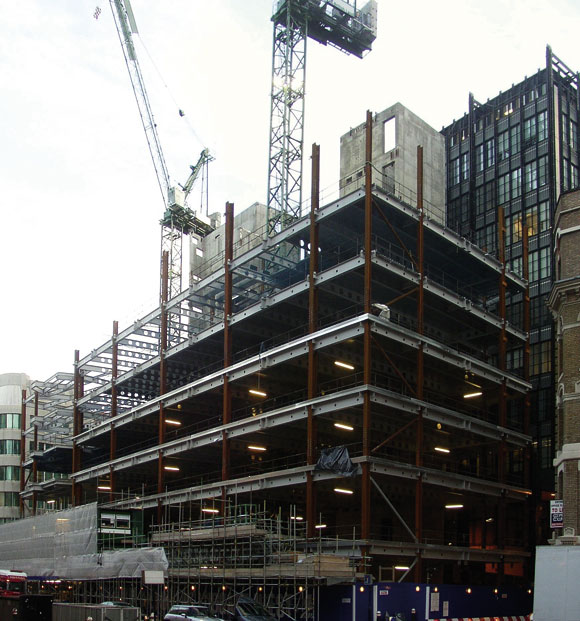 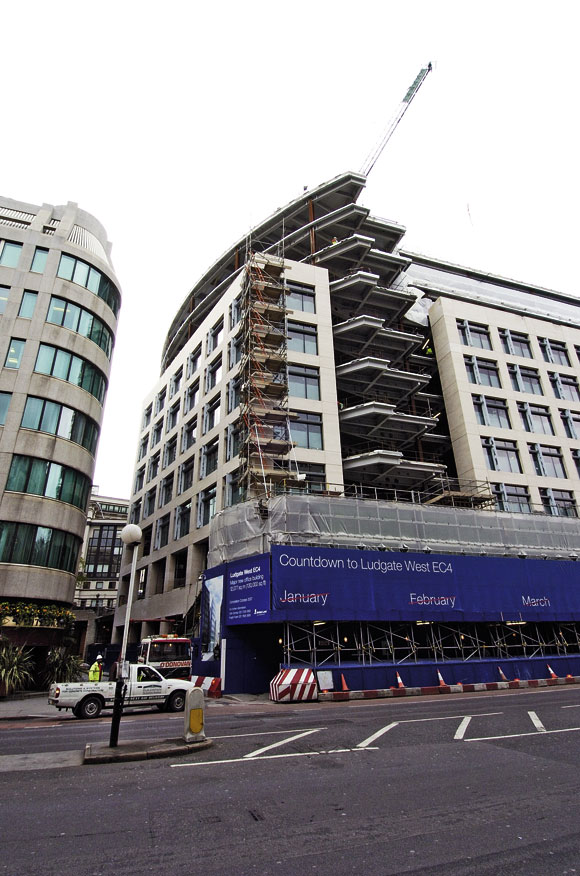 Up to the 6th floor the building is clad with limestone, while above this level the walls are glazed 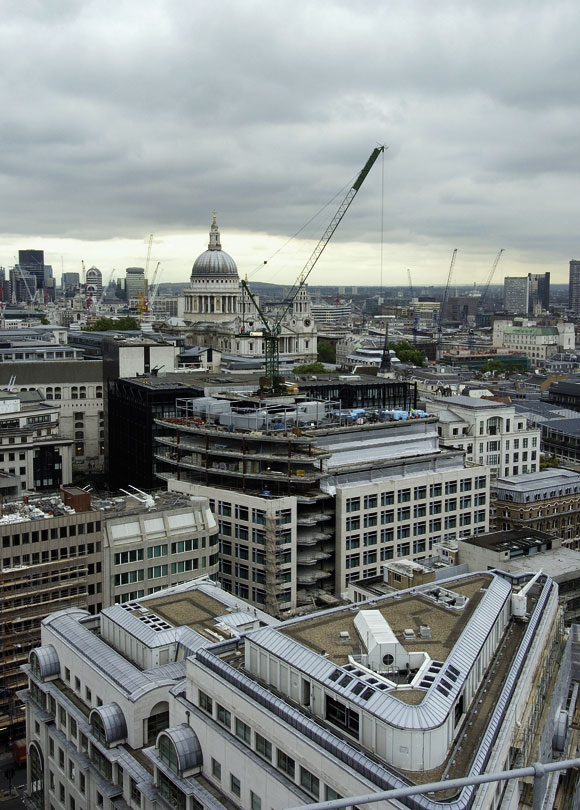 Adam Bradshaw, Structural Engineer at project architect and structural engineer Skidmore Owings & Merrill (SOM), says early in the design process it was proposed that some of the steelwork’s intumescent fire protection could be downgraded from 90 minutes to 60 minutes.

“Many of the structural beams have a 60 minute rating and a lot are completely unprotected,” he says. “This has meant substantial cost savings to the client.”

Buro Happold, along with consultants Roger Preston & Partners, were brought on board to coordinate and ensure an integrated approach was under taken for the fire engineering.

The design team put forward the suggestion to re-engineer the fire rating to the client British Land, and the decision was taken to go ahead.

Neal Butterworth, Project Engineer for Buro Happold, says this kind of approach is becoming more commonplace due to greater use of computer software packages – in particular the Vulcan software developed in conjunction with Sheffield University (see story below) – and the realisation of the savings to be had.

“The cost issue is the best way of selling this approach to the client,” says Mr Butterworth. “But there is also a purist element for engineers because the models allow us to predict the real fire performance of the structure under realistic exposure conditions.”

The initial fire engineering design process involved Buro Happold deciding what areas of steelwork needed protecting and then working around some worst case scenarios with a computer model of the project.

Using the generic approach within prescriptive guidance would require maximum fire protection to everything, but the computer model was used to work out where this could be reduced and which areas didn’t need protection at all.

“The advantages of having the software package is that it shows the margin of safety,” explains Mr Butterworth. “The modelling demonstrates exactly what fire protection is needed, how much and where.”

“By using the software model we were able to determine which structural members actually needed fire protection,” adds Mr Butterworth. “Savings were made as less intumescent paint was used and less painting was required after the fabrication process.”

Andy Rae, Project Manager for Severfield-Reeve, says all intumescent paint was applied off-site, and as some steel members only had a primer coating, the overall fabrication process was therefore quicker.

Commenting on this kind of fire engineering, Mr Bradshaw adds that SOM has done work of this nature before on multi-storey projects, as it means considerable cost savings to the client. “The beams which are protected provide the structure’s lateral stability, while the unprotected secondary beams wouldn’t fail in a fire.”

However, to compensate for the downgrading of the fire protection on some of the beams, some of the areas around the cores and staircases were also kept at 90 minutes.

Once the design process had been completed, the steelwork fabrication was able to begin. The project has a tight 66-week programme with completion set for this October.

Consequently, once the concrete cores were finished, steelwork erection began in August 2006 with the last beams being lifted into place in January 2007.

British Land’s involvement in the project actually dates back to the demolition of Caroone House, which occupied the site from 1969 until it was pulled down in 2004. At this time however, the London property market had hit a glitch and so nothing much happened except for the construction of the concrete basement and slab.

However, last year the market had improved sufficiently for construction work to properly get under way.

Ian Rimmer, Project Manager for Sir Robert McAlpine, says by the time his company were awarded the build contract the lower basement level was already completed under a separate contract.

“From May 2006 until July, we initially concentrated on getting the two main concrete cores up,” says Mr Rimmer. “Once these were complete, the steel frame could begin to be erected.”

Each floor has open plan office areas with no internal columns. Radiating out from the two centrally located cores, there are long span composite floors in 13.5m x 9m grids.

“Steel was the obvious choice for this project as the timescale was so tight and its much quicker to build with than concrete,” adds Mr Rimmer.

As with most inner city developments there were minimal set down areas available for materials. Consequently, steel was delivered to site on a just-in-time basis, and the project’s two tower cranes used to capacity.

“There were standard tolerances with this job,” explains Mr Bradshaw. “The cores provide the stability, while around the perimeter there are moment connections.”

Mr Rae says the steelwork erectors worked in two zones, north and south. By dividing the project in half, they were able to erect two complete floors and then hand these over to the deckers. While steel was being erected in the other half of the project the steel decking was being installed on the first sector in readiness for the next two levels to be erected.

From ground floor to the sixth level the building has sheer elevations on all sides. However, from here on up the structure has three steps on the west and south elevations, taking in the seventh, eighth and ninth floors. These small terraces are 1m deep on the west (Farringdon Road) side, and approximately 500mm deep on the south side.

“We had to erect 900mm deep beams along these steps, otherwise the beam members are uniformly 550mm deep cellular sections. These were required to accept all of the services,” sums up Mr Bradshaw. 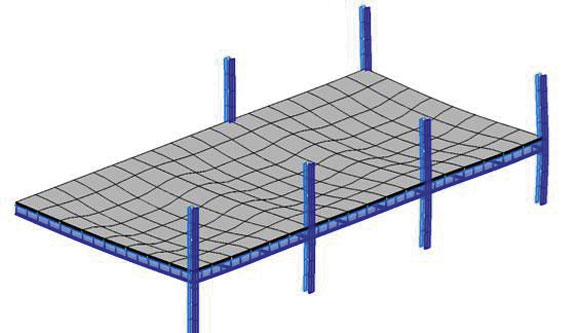 The Vulcan fire engineering software is marketed by Vulcan Solutions, a company set up jointly by the University of Sheffield and Buro Happold. Since its launch it has been used by leading specialist consultants to support advanced fire engineering design and fire protection strategies for major construction projects.

The software allows advanced fire engineering to be realised quickly and easily, by giving reliable levels of safety and robustness. Other advantages include the cost savings made from reduced applied protection, shorter site construction times and reduced maintenance.

VulcanLite, a specialist user interface that has been developed for simple buildings, is easy to use, and requires no knowledge of finite element analysis. Data is entered using simple forms, while the analysis uses the Vulcan engine. Results such as deflections and member forces versus temperature, can be output in a form directly suitable for presentation.

Vulcan has been extensively validated against a range of data including the results of the fire test programme at BRE’s test facility at Cardington.