One of the country’s leading DIY and building trade suppliers is expanding one of its distribution centres with steel construction.

Screwfix, which is part of the Kingfisher group, supplies trade tools, accessories and hardware products.

The expansion will double the size of the existing facility to approximately 58,500m²; and create more than 100 full-time positions as well as safeguarding 421 existing jobs on the site. The company has also said a further 200 jobs could be created in the future.

Trentham Lakes is recognised as a premier distribution, industrial, and mixed-use business park in Stoke-on-Trent. It is home to Stoke City FC’s Britannia Stadium, as well as a hotel, restaurants, car showrooms, and major distribution and manufacturing companies. 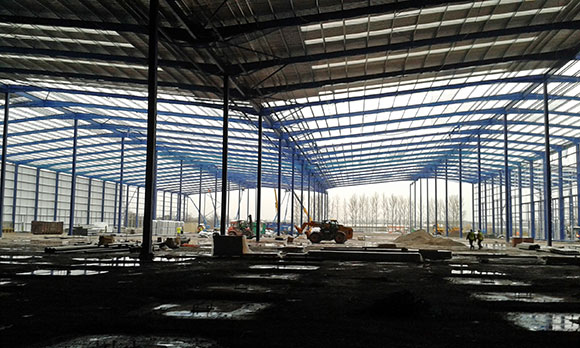 The portal frames near completion

Screwfix Chief Executive Andrew Livingston says: “The current building has been here for around a decade and holds 40,000 different products. This expansion allows us to hold more products to help keep up with the demand.

“Stoke-on-Trent is a great area for distribution because of where it is located. It allows us to deliver to stores and customers in Scotland as well as all the way to the south of the country.”

He comments: “It is a very exciting development considering we have been in discussion with the company since November 2011. 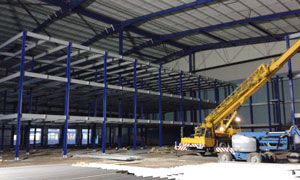 “The investment demonstrates the fact that there is a general feeling of economic recovery and we are hopeful this will be a catalyst for other businesses coming here.”

Working on behalf of Winvic Construction, (the company that also built the existing depot) Caunton Engineering has supplied 1,270t of structural steelwork for the project, a total that includes 200t of cold rolled steel.

The overall steel frame for the extension is a stand-alone structure with its nearest line of columns 3m away from the existing distribution centre.

“This means the new steel frame is structurally independent, as it gets stability from its own vertical bracing systems and doesn’t impose any loads on the older building,” says Caunton Engineering Project Designer Colin Winter.

The new steel frame cantilevers from its last line of columns to within 50mm of the existing building, with cladding details then creating a seamless join between the two steel frames and thereby forming one large building.

“The roof rafters have a heavily haunched connection and were brought to site in 15m lengths,” adds Mr Winter.

Once bolted into 30m sections two mobile cranes lifted the rafters into position in a tandem operation.

Three bays of the extension accommodate three internal mezzanine levels. Two of these compositely formed floors cover the entire width of the building, while the third level is slightly smaller and only covers approximately two-thirds of the width.

For ease of programme, Caunton Engineering erected the main frame of the extension first and then proceeded to install the mezzanine levels afterwards.

The distribution centre is scheduled for completion by the end of the year. 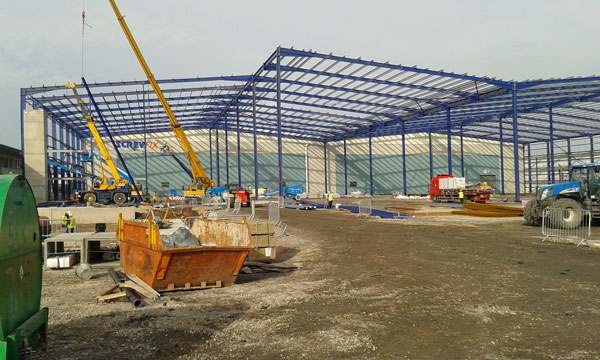 In 2014, approximately 45% of the UK consumption of constructional steelwork in the UK was used in single-storey buildings for industrial, retail and leisure use. In this market sector, portal frames are the most common structural form in pitched roof buildings. This type of building is lightweight, structurally efficient and familiar to UK designers in both design and detailing.

The structural form offers flexibility in building arrangement and functionality. The basic form of the single-span pitched portal frame can be easily extended to include multiple spans; hit and miss frames to reduce the incidence of internal columns; apex props to reduce fabrication and increase the roof area without using valley gutters and internal rainwater down pipes; EOT (Electric Overhead Travelling) cranes on runway beams supported on brackets or lattice columns.

Portal frames are continuous structures with rigid joints which are necessary to provide stability in the plane of the structure. This feature differentiates the structural form from that with which engineers are most familiar: namely braced frames of simple construction. In this form of construction, beam-to-column joints are assumed to carry shear only and lateral stability is provided by braced or concrete cores. Portal frames with pinned feet only require two hinges in the frame to form a mechanism in the plane of the frame. This fact means that the plastic design of portal frames is relatively straightforward. Plastic design is efficient where strength is the limiting criterion because redistribution of load after the formation of one plastic hinge means that the material is used more efficiently than for elastic design.

The design of steel portal frames was comprehensively covered in BS 5950-1 which devoted a whole section to advice on portal frame design. BS EN 1993-1-1 does not cover portal frames in such depth; design principles and general application rules are provided, not detailed and exhaustive design rules. Software packages based on the detailed treatment in BS 5950-1 have been used for many years and this means most computer-designed portal frames are based on BS 5950-1.

The SCI is soon to publish a document on portal frames to Eurocode 3 which will provide guidance to designers and assist software developers to write software to carry out design verification to BS EN 1993-1-1:2005.