Steel regeneration for old mine 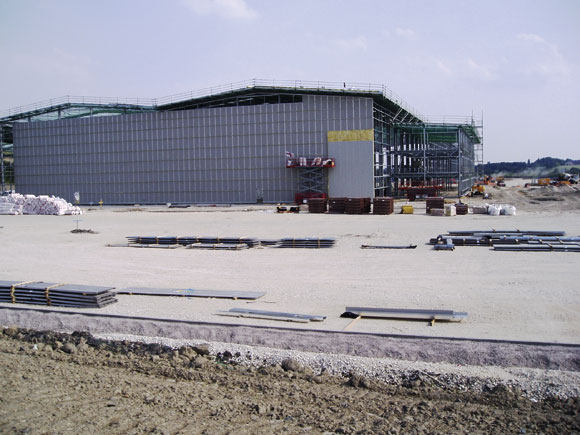 Redeveloping brownfield sites is now an important sector as many former industrial areas are opened up for new business. In South Yorkshire a new distribution centre has been erected on a former open cast coal mine and will bring new employment to the area.

South Yorkshire was once one of the main coal mining regions of the UK. The sector employed thousands of people and provided the fuel for most of the other major local industries such as steel, textiles and heavy engineering.

Today, the majority of the mines have been decommissioned leaving behind large tracts of land ready for redevelopment. One of the largest of these brownfield sites is located at Houghton Main, near Barnsley, where a speculative 49,025m2 distribution centre has recently been completed.

ProLogis bought the 36-acre prime site in October 2005, after Harworth Estates – a division of UK Coal – closed the colliery and reclaimed the land for employment use.

Buckingham Group Contracting, working on behalf of ProLogis, has constructed the cross-dock facility which has 84 docks, a two-storey external office block, a small internal hub office and easy access to both the M1 and M18 motorways.

However, before work on the structure could begin some thorough ground improvements had to undertaken. Rob Miller, Buckingham’s Contracts Director explains: “The former open cast mine was backfilled and remedial work had been completed before we came on site. But in places the backfilling was 30m deep and there was a possibility of long term settlement.”

The company consequently employed dynamic compaction over the area to a depth of 6m. “This gave us a stiffened raft of material on which to build the warehouse,” Mr Miller explains. 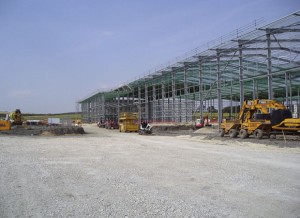 Once the site had been sufficiently compacted Buckingham then constructed the concrete base and steel work was able to start in May.

Grenville Griffiths, Caunton’s Project Director says the main challenge with this project and any job of this size, is always delivering the steelwork on time as well as completing the erection within the programme.

“All of this we did,” says Mr Griffiths. “We split the entire process into four phases and completed the job in a speedy eight weeks.”

To allow for the large spans, Caunton used 610mm x 229mm beams as rafters throughout, while internal and external columns are predominantly 762mm x 267mm beams.

The warehouse also features cantilevered eaves detail with bullnose flashing and feature CHS bracing to the elevations. While at the unit’s two goods entrances there are also CHS columns acting as supports to building’s brise soleil sunshade louvre blades.

Buckingham completed its work at the end of November, and the speculatively built warehouse is now ready for use.

Commenting on the project, Leader of Barnsley Council Stephen Houghton CBE says: “We are delighted that ProLogis chose to make this significant investment in Barnsley and welcome the local jobs this development will create.”