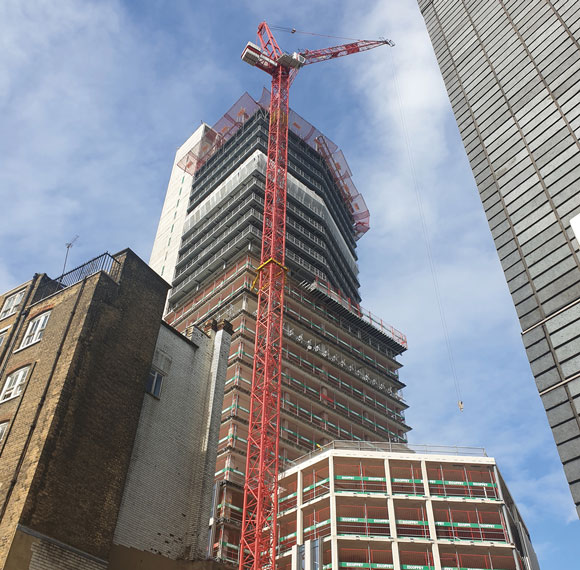 A 1960s office block in central London is being given a new lease of life with the addition of 13 new steel-framed floors.

A 16-storey office block, built in the 1960s, is being reinvented by Mace, who are stripping back the original concrete frame and adding 13 new steel-framed floors to enlarge the structure into a 29-storey edifice.

The works also include enlarging the two podiums that sit adjacent to the building, removing and replacing the existing two cores as well as some substantial strengthening works to the existing columns to allow them to support extra loadings.

When viewing this construction project, the obvious question is why not demolish the old building and start afresh?

The answer is simple, according to AKT II Associate, Michael Hynd. “The primary driver was minimising the embodied carbon of the scheme and being as environmentally-friendly as possible through reusing the inherent capacity in the existing structure.

“It is more sustainable to refurbish and enhance the building as opposed to undertaking a large demolition programme, which was something the local authority and the client was keen to avoid.” 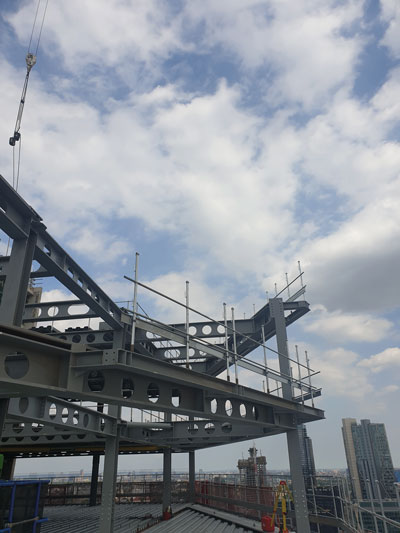 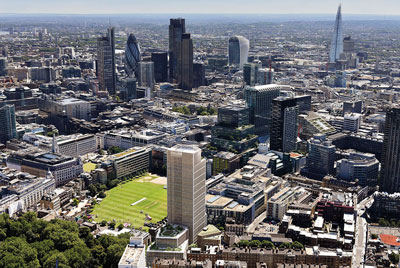 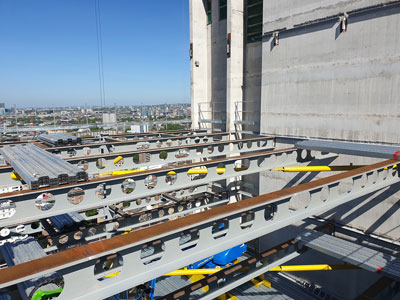 Cellular beams have been used for the new upper floors

For this reason, main contractor Mace decided on a cut-and-carve approach, whereby as much of the original structure is being retained, some existing floor plates enlarged and the top of the building extended with new floors.

The end product of this work will result in Hylo being converted into what CIT describes as a design-led work and lifestyle office development comprising 29 floors with 25,800m² of office and retail space.

Steve Riddell, Managing Director Developments, CIT says: “As the line between corporate and creative becomes more integrated, our aim is to provide a workplace solution that offers flexible spaces that embrace collaboration and connectivity at the same time. We are excited for Hylo to become the defining destination in the Old Street district.”

The choice of structural steelwork for the new upper floors was made due to the material’s lightweight attributes compared to other framing solutions.

“The original building had residual capacity within the floor slabs, which were believed to have been designed to accommodate printing works on some floors,” says Mr Hynd.

“It’s fair to say the large diameter under-ream piles had some free capacity which we’ve used up with the new steel floors, however, no other framing solution would have allowed us to re-use the existing foundations, while achieving the desired spans and floor zones in the extension floors.”

Paul Fairhurst, Mace’s Project Director at Hylo agrees and says: “We chose steel to transform the Hylo structure because it is a lighter material than concrete. This meant that the original and new foundations did not have to be as deep. We therefore had the knock-on benefit of cost efficiency and savings to foundation design and installation.

“Secondly, steel is typically quicker to erect and install than a traditional reinforced concrete structure.”

Prior to Bourne Steel erecting the steelwork and installing the metal deck flooring for 13 new levels of the structure, a lot of work had to be undertaken to the existing frame. An extensive surveying programme was completed in order to determine the condition of the concrete. The results proved to be very welcome as the frame was in good order.

However, the two cores were too small for the needs of the enlarged building and so they were replaced with two new ones that extended to the full new height of the building and consequently offered the stability that was needed for the new upper steel-framed levels.

Interestingly, the areas beneath the new cores were some of the few parts of the scheme, which did require the installation of new piled foundations.

Throughout the structure, the concrete columns were strengthened with concrete jackets, installed on every floor. The only exception were some areas where the internal architectural vision required a slimmer solution and in these places steel strengthening collars were installed.

From level 16, new steel columns were installed on top of the existing concrete members. However, the existing grid pattern is based around a column spacing of 6.1m × 7.6m. This was deemed to be slightly restrictive for the new floorplates and so some column positions have been omitted, with the upper floors having just one row of internal columns and spans of up to 12m.

All of the steelwork erected by Bourne is standard S355 grade, and the beams are all custom-made plate girders, with depths ranging from 525mm to 665mm. Modular pieces for the perimeter, weighing up to 7t, were also introduced to reduce the number of pieces to be lifted.

Commenting on the steelwork programme, Bourne Steel Project Manager Theodoros Pitrakkos says: “The floorplates are generally repetitive up to level 25, but level 26 has a step-back creating a terrace.”

“Considerable planning was required to devise a construction programme that allowed the works to be continuous. To achieve this, the floorplate was split into three main areas and the steelwork was built three floors at a time. Primary activities involved welding fittings to cast-in plates in the core walls for beam connections, steelwork erection, metal decking installation and on-site painting. These activities continuously rotated throughout the floorplate to meet programme.”

With the steel frame starting at Level 16, Bourne’s main challenge was dealing with high winds during construction, while maintaining the programme and the tight erection tolerances. Because the site is a confined high-rise plot, there was limited storage space and so the steel was generally erected directly from the delivery trailer by tower crane in conjunction with MEWPS.

Summing up, Bourne Steel’s engineering team say: “Due to the nature of the project and the high standards that were required from MACE, AKT II and importantly the architects HCLA. It was even more imperative to have a close relationship during the design and build process, to ensure it met all expectations.

“As all steelwork in its final state was visually exposed, as a team we reviewed all end connections and column splices throughout to insure they were architecturally-pleasing, but at the same time ensuring they met the design requirements.”

Hylo is due to complete in spring 2021. According to CIT, the tenants will enjoy the latest building amenities and specification with unparalleled views across London, while the landscaped roof terraces, breakout spaces and dining areas will create a relaxed environment away from traditional desks. In addition, they will benefit from generous locker and shower facilities, as well as cycle storage for over 400 bikes. An expansive ground floor reception incorporating a modern lounge and cafe will make Hylo a social hot spot all day.