Façade retention in the frame 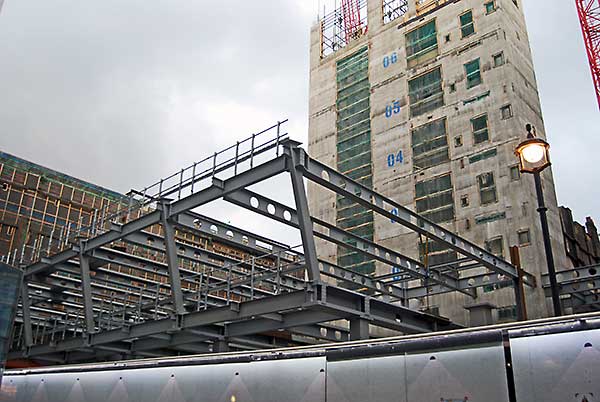 Named after the Prince Regent (later George VI) the street has the distinction of being one of the capital’s first planned developments, built to impose order on a previously medieval street layout.

Unfortunately none of the original buildings, with the exception of All Souls Church, survived a wholesale redevelopment programme completed in 1927. Fashions in shopping had changed and the Georgian structures were not conducive to the large department stores wanted in the early Twentieth Century.

Since the turn of the Millennium, the Crown Estate has embarked on the second redevelopment of this grand street, a project that will ultimately replace many of the office and retail buildings with modern open plan flexible accommodation.

As every building along Regent Street is protected as a listed structure with at least Grade II status, all construction work involves extensive façade retention. 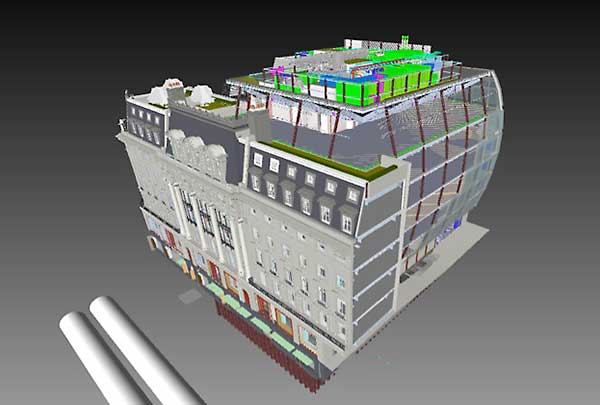 An example of this work is 169-183 Regent Street, also known as block W5, a major redevelopment of a plot bounded by New Burlington Street to the south and New Burlington Place to the north.

Here a number of interlinked buildings have been demolished to make way for a new open-plan six-storey office block, sitting above a ground floor retail zone with two basement levels.

The two main façades along Regent Street and New Burlington Street are being retained, with the latter also incorporating two 300-year old listed buildings that are being renovated as part of the overall project.

A structural steel frame is creating the new structure with Severfield erecting a total of 1,800t to complete its package. Using one centrally positioned core for its stability, the steelwork is based around an irregular grid with internal spans varying from 11.5m up to 16.5m.

“The two retained façades dictate the perimeter column spacing as each new steel column is placed directly behind a retained pillar to maximise internal space,” explains Waterman Director, David Fung. “The façades were originally for a number of businesses and are consequently not spaced at regular intervals.”

The new structure has no internal columns as long clear spans for both the retail and offices was an important client stipulation. Forming these open spans are a series of 520mm deep Fabsec plate girders with holes to accommodate the building’s services. 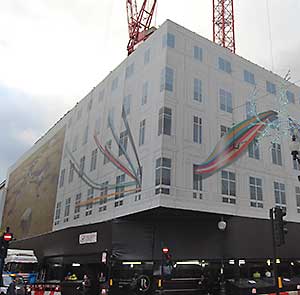 Hoardings cover the façades and hide the construction work

“Using steelwork as the project’s structural frame was the only solution as we were able to maximise the number of floors by incorporating all services, such as air conditioning, within the girders depth,” says Mr Fung. “All the while achieving the desired long clear spans, something which could not have been done with a concrete frame.”

The steelwork design has also contributed to the increase in useable floor area. Sitting on the same footprint as the old buildings, the new structure will offer approximately 15,500m² more lettable space.

The steel frame, which begins at the lowest basement level, is attached to the two retained façades from ground floor upwards. This is achieved by bolting the new frame via metal cleats to the façade’s 1920s steelwork or connecting to brackets bolted into the masonry.

“The steelwork gains no stability from the façade and likewise the façade is structurally independent,” says Severfield Project Manager, Adam Henshaw. “We only connect the two once we have erected two floors above this connection point and the floors have been decked, plumbed and levelled.”

Above the basements the floorplan of the building consists of a ground floor with a double height floor-to-ceiling height that will accommodate retail areas, the main entrance lobby and a service yard with a vehicle turntable. Between the main core and the two retained listed buildings there is an internal open courtyard that forms a lightwell that extends from ground floor level up the full height of the structure.

Above ground floor the office levels are similar with the exception of the topmost sixth level.

The floor-to-ceiling height increases for the top floor. All other office levels are 3.6m high, while this premium floor has a sloping floor-to-ceiling height that reaches a maximum of 4.8m. Creating the roof is a series of feature box sections, chosen for their aesthetic value, as they will be left exposed within the completed building.

Severfield designed all of the frame’s connections and Mr Henshaw says the most challenging aspect of this work was the New Burlington Place elevation. This side of the structure features a sloping façade that inclines inwards from the roof to the top of the third floor, meaning the upper office levels have an increase in floor area. This feature has been achieved with welded splice connections for each floor level that allows the perimeter columns to be inclined.

Severfield completed the steelwork programme in January, while the entire project is due to finish in August. 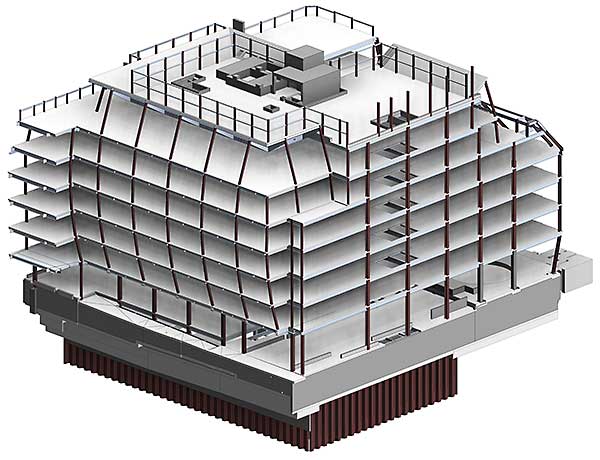 Work on the project began in April 2013 and, as well as a demolition programme, main contractor Mace’s early works included installing façade retention systems and completing a large excavation scheme in order to accommodate the new structure’s double basement.

All of the overburden that had to leave the site exited via the project’s only access point, which is a former shop-front within the retained New Burlington Street façade.

Access to a site, which is either surrounded by retained façades or party walls, is not the only logistical challenge for the construction team. As the majority of the project’s footprint will be built on, there is little or no room for materials to be stored on site.

“Logistics and planning are key drivers on this project,” explains Mace Project Director, Steve Hawthorne. “We have one laydown area along New Burlington Street which we use for deliveries such as steelwork. Because of the lack of onsite space all steelwork has to be delivered on a just-in-time basis, which means it’s lifted off the trucks and pretty much erected straight away.”