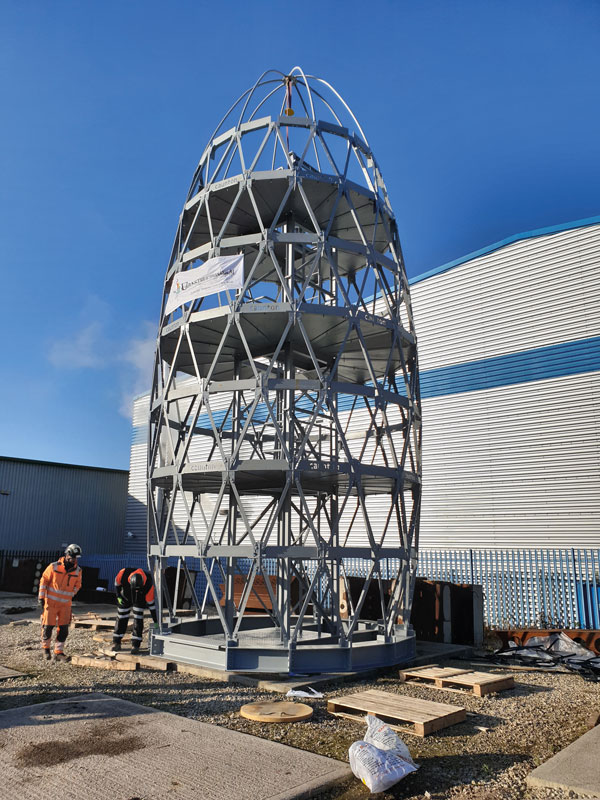 The second Gherkin can be demounted more easily than its predecessor

Following on from the success of its first mini-Swiss Re (Gherkin) building, Caunton Engineering has fabricated a second similar structure to be located at the Constructionarium’s new site in Southall, west London.

FACT FILE
Mini-Gherkin two
Main client: Constructionarium
Steelwork contractor: Caunton Engineering
Steel tonnage: 13tOffering students and professionals an innovative and hands-on construction experience in the built environment, Constructionarium is a not-for-profit organisation with a number of sites throughout the country.

The initiative to build the Constructionarium was originally pioneered in a joint venture between Imperial College London, Expedition Engineering and John Doyle Construction.

Since 2003, more than 12,000 delegates have attended Constructionarium to work in teams over six days to build one of their carefully designed projects. Each project is a scaled down replica of an iconic structure from around the world, mirroring the challenges of life on site and enabling students to apply the knowledge they have gained in a practical, safe and relevant environment. 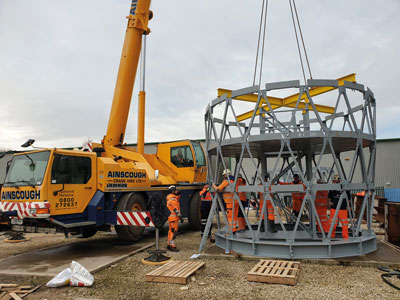 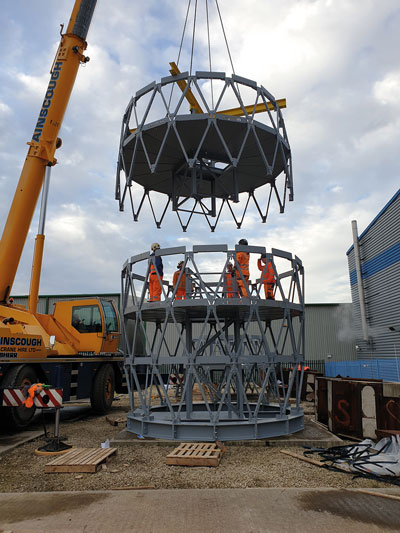 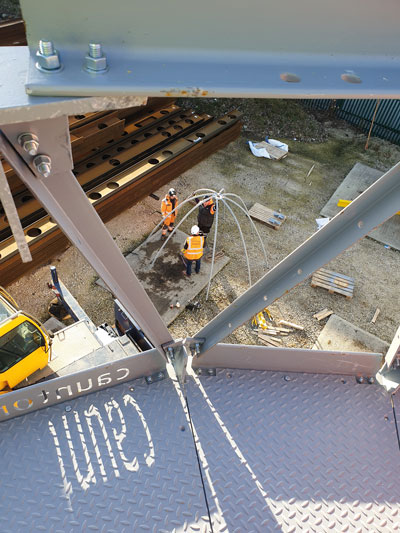 Caunton apprentices carried out a trial erection to ensure the structure fitted together.

This higher education stratagem is also aimed at addressing the current shortfall in practical construction and design expertise among graduates, and attract prospective students by offering an onsite degree.

One of these scaled-down mini structures is London’s Swiss Re building, also dubbed the Gherkin, which Caunton Engineering, in conjunction with Expedition Engineering, fabricated and supplied in 2007 for the Constructionarium at the National Construction College at Bircham Newton in Norfolk (see NSC July 2008).

“The original mini-Gherkin was a great success, and we’ve now been contracted to fabricate and supply a second one for the Constructionarium’s new site in Southall,” explains Caunton Engineering Technical Director Robert Weeden.

“Our aim for the mini Gherkin II was to reduce the fabrication time and increase repetition, thereby making it safer and quicker for site operatives to erect.”

The second mini-Gherkin is similar in design to its predecessor. It is just under 12m-high, has a base diameter of 4.4m and a diameter of 4.9m around its middle. The steelwork supports a Tata Steel Durbar steel floor plate to create three upper levels.

The most important difference between the two Gherkins is the new structure has been designed without a positive fixing to the ground slab. Instead, it has a ring beam, a design change made by Caunton’s technical team to allow the new structure to be fully mobile.

“With a ring beam replacing holding down bolts, the Gherkin will not just be available at the Constructionarium’s new site, but it can easily be moved from site to site, such as the premises of interested companies,” adds Mr Weeden. “This was an important criteria for our client.”

Both of the mini-Gherkins have a similar weight, but the new structure’s design incorporates angle sections instead of SHS members. This is said to have led to a more economic design and one that will allow cladding systems to be more easily fixed to the erected structure.

The angle members that are used round the outside of the building are all 1,050mm-long, while the sections used for the internal stair tower are between 1,120mm-long and 1,620mm-long.

“Also, increasing the economic design of this structure, we slightly changed the geometry, which enabled more repition. We also made sure the connecting nodes were all similar within each ring, which makes the erection sequence easier and quicker,” says Mr Weeden.

The steelwork for both the original and this second Gherkin structure was designed, modelled, detailed and fabricated by Caunton’s apprentices in the company’s accredited Academy, which the company says further emphasises the educational benefits of this enterprising scheme.

The Gherkin consists of approximately 600 steel members and is assembled into five sections, including the base section that has the ring beam. After this lowest section is in place, the next four sections, which are assembled on the ground, are subsequently lifted into place, using a crane with a bespoke lifting frame, which was also designed by Caunton Engineering.

Making sure the entire structure fitted together correctly, Caunton’s apprentices undertook a trial erection in the company’s car park prior to the steelwork being delivered to the client.

Highlighting the expertise and the high level of the apprentice’s work, the entire structure was easily erected in less than one day, with each section fitting exactly.

Summing up, Emeritus Professor David Nethercot, Imperial College says: “We have found that Constructionarium positively influences students towards careers in engineering and is seen as an exemplar of best practice for other departments within the engineering faculty.”