A renowned high-tech multinational company is expanding its Cambridge headquarters with the construction of a new office facility.

Located adjacent to the company’s existing HQ, the new facility will be ready for occupation this autumn and will enable ARM to increase its headcount in Cambridge to 3,000 people.

Mike Muller, Chief Technology Officer and Co-Founder of ARM, says: “We are making a significant investment at our headquarters in Cambridge to help us deliver the next phase of company growth.”

“The expanded Cambridge campus will house many of the ARM engineers designing next generation processors and software that will power silicon chips supporting the rise of smart cities, for consumer devices and the communications network.

“There are 86 billion ARM-based silicon chips in the world and that number is growing as the built environment, transportation, homes and offices become increasingly connected.”

Having started on site in early 2016, main contractor Kier is constructing a highly distinctive facility that will be clad with curtain walling and bespoke vertical aluminium brise soleil solar shading, which will form a 6m-high saw tooth pattern. 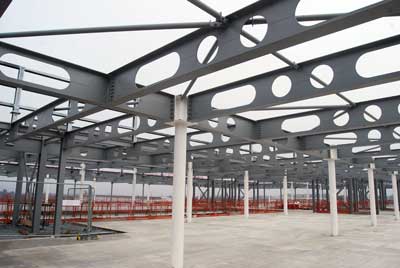 Early works for Kier included a lengthy groundworks scheme to prepare the previously greenfield site. This involved bulk excavation, ground stabilisation and the installation of pad foundations for the steel frame.

A large gas main runs across the site and a steel Bailey Bridge had to be installed to span this important conduit and allow cranes and other plant to drive across it.

The three-storey facility consists of two similar buildings, known as ARM A and B, that are inter-connected by a first-floor walkway bridge. ARM A will also on completion be connected to the existing ARM HQ via a ground floor covered walkway.

During the design stage a number of framing solutions were considered, but steelwork was chosen because of its speed and cost-efficiency according to Kier.

“Integrating the services within the floor depth and keeping the height of the buildings down so that they match the surrounding structures were also important criteria for the design,” adds Ramboll Engineer Helen Leung.

“So we opted for a steel composite design throughout both buildings using 600mm-deep cellular beams, to accommodate the services, supporting metal deck flooring.” 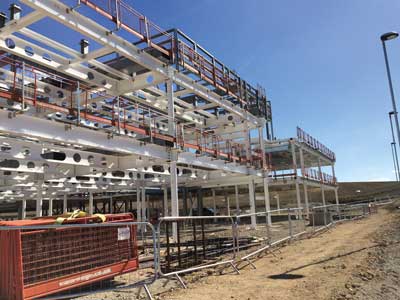 The two steel-framed structures are similar in design with the only major difference being that ARM A measures 85m long × 55m wide, making it 6m longer than its neighbour.

Stability for the steel frames is derived from their braced cores, with both buildings having a main centrally positioned lift core and smaller staircase cores at either end.

“Steel erection began on these main braced core areas on each structure,” explains Caunton Engineering Contracts Manager Michael Firth. “Once they were erected we had a rigid box and we were then able to proceed in two directions with two gangs away from this stability-giving core to complete each building.”

Steel erection initially began on ARM B as groundworks were still ongoing on the other part of the site. However, within a couple of weeks Caunton Engineering was able to work simultaneously on both buildings using up to four mobile cranes.

The heavily braced cores feature UC sections as these areas of the steelwork will be hidden behind walls in the completed buildings. Elsewhere in the scheme, circular hollow sections have been used as most columns will be left exposed, with the perimeter members in full view behind the glazing.

Either side of the main lift cores, both buildings feature atriums that will be spanned by rooflights to create voids that will allow natural light to penetrate the inner parts of the buildings.

The perimeter columns are predominantly spaced at 6m centres, with the exception of the end two bays on each building where the grid increases to a 9m wide spacing.

The second-storey of each building accommodates plant areas as well as more offices, although these working spaces are set back to provide rooftop terraces.

The ARM HQ is scheduled for an early 2018 completion.

The first of these, providing 268 spaces over two levels, was handed over in January and was erected by Bourne Parking (part of Bourne Construction Engineering).

Requiring 400t of steel and 400 precast floor slabs, Bourne Parking completed its work in a 15-week programme. As well as steel erection and the installation of the floor slabs, the company’s work also included installing two precast staircases and the cladding.

Once this structure was handed over Kier was able to close an existing on-site surface car park while still keeping sufficient parking spaces available for ARM employees during the construction programme. This plot of land is now being made ready for the construction of the second 500-space structure.